Some precautions from someone who has been there!

“I think I should point something out that could cause a lot of people to end up with fried motherboards when drilling their slotkets.

I am currently using an old Abit slotket converter card and have drilled two holes into it to attach my water cooler with metal bolts. A while back I changed the CPU and found that my computer wouldn’t boot once I reassembled the unit. I tried powering up again and was met with a plume of smoke and a loud ‘pop’ coming from the motherboard – one of the voltage regulators had blown! :o(.

I couldn’t work out what caused it, but luckily I managed to locate a replacement part and solder it in. A few weeks later the same happened again! It took me a while but I eventually traced the problem to the holes I had drilled in the slotket.

To cut a long story short – DO NOT USE METAL BOLTS. And using RUBBER/PLASTIC WASHERS WONT MAKE ANY DIFFERENCE! because its not the back or front of the PCB that’s shorting. The problem lies with the fact that the slotket’s PCB is made out of many layers, and those internal layers are power planes (ie. they are ground or 5 volts etc).

By putting a metal bolt through the card you risk shorting some of the power planes to ground, especially if you attach your metal bolts directly to a metal heatsink which is in contact with the metal slug of your chip (which by the way is grounded!).

Take it from me! It may be working fine now, but the slightest movement of those bolts could cause a short and end up frying the voltage regulators on your motherboard :o(. I’ve blown the regulators on my old BH6 twice, and they’re a right pain to de-solder and replace.

The solution is to use plastic bolts, or if your lazy like me – you can cover the part of the bolt that goes through the slotket with insulation tape. I think you should post this warning – its a very unpleasant feeling when you see smoke rising from your computer :o(”

What follows is a fix I used to salvage a damaged slotket – needless to say if you try this and ruin your slotket, it’s your nickel.

SUMMARY: Ever break off a lug on a slotket? Here’s how I saved one to use with a CPU water cooler.

One of the advantages of doing product reviews is breaking stuff – how else would we find “creative” solutions if we’re not forced to think “outside the box”. One of the most frustrating things to happen is breaking off the lug on a perfectly good slotket. Not to worry! Get out the drill and let’s do surgery!

The basic strategy is to use two holes at the top of the card for bolts and to find spaces on the card for two more holes. This gives you four bolts to mount any variety of coolers – air or water. The pic above shows the finished product – you will notice that one bolt is fixed to the side of the card; sometimes you can’t find space to drill a hole and this is the next best thing.

Shown below is the bolt edge-glued to the card. I used 5 minute epoxy – great stuff. I also used a fiber washer on the bolt head because there are some traces on the back side of the card close to the hole I drilled. I used a Dremel to drill the holes – if you use a regular drill, use a guide to make sure the drill bit does not wander. 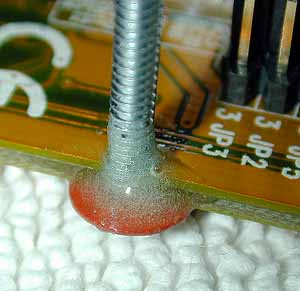 You will notice two holes on the left side of the card. The pic below shows these in detail, front and back. In selecting where to drill a hole, you have to ensure that both sides are clear of any circuit lines (Duh!). It seems like a lot of these cards have plenty of space on the left side for mounting holes, but the right side will present a challenge. 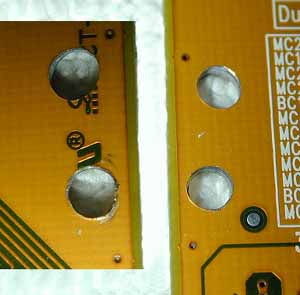 This remaining two pics shows the four bolts mounted on the card’s back and a front view showing how I mounted the water block. I did this quickly using old front plastic slot covers; more elegant solutions are possible, but this was OK for testing purposes. Clearance in the motherboard’s slot bracket might be an issue, so be sure to consider this beforehand. 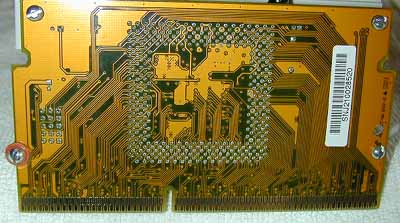 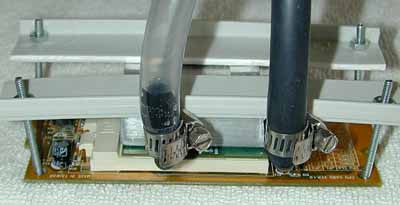 Not everyone wants to do invasive surgery – go to page 2 for the “outpatient” technique.

Considering the possibility that the “surgical fix” (see page 1) could result in some dire consequences and necessity again driving my repair mania, I decided to try using the greatest chemical glue I know – EPOXY! I love this stuff – sticks to almost anything and is decidedly permanent. Coupled with fiberglass cloth, it is almost indestructible. 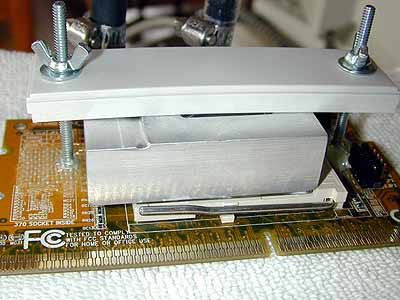 As the pic above shows, I was able to use only two bolts rather than the four in the previous fix. I decided to use two because it is easier to align two properly affixed bolts than four. Short of lifting an elephant, two expoxied bolts are going to handle about anything you want to snug up to your CPU.

In this fix, you want to make sure that the bolts are in the same line as the two mid socket lugs. These lugs line up dead center on the CPU and this alignment is critical for CuMine CPUs. In addition, measure along the center line so that the bolts are placed equidistant from the center of the CPU; this makes heatsink or water block alignment a sure thing.

Pick out two spots on the card that are devoid of components or trace lines. Now I know you have to compromise on this point and you will wind up epoxying over something critical. The best way to avoid the possibility of any electrical problems is to first place a dollop of epoxy over your selected spot. Let this get almost hard, then place another dollop over that and glue the bolt in place.

The first dollop acts as an insulator if you’re using metal bolts. You can also use plastic which avoids this issue, but some plastics may not adhere to epoxy very well. If you let the second dollop set up a bit, you can place the bolt head on it and it will not fall over (I assume you are using 5 minute epoxy). The left hand image below shows this step. 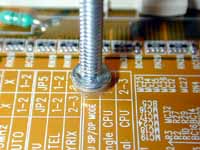 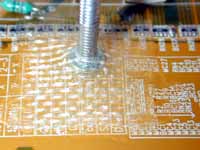 After it hardens, reinforce the bolt head with a small piece of fiberglass cloth. I used a piece about 1 inch square. If you’ve never worked with fiberglass cloth, a warning: It’s not really like cloth – it comes apart very easily. It is a collection of loose strands, so handle with care.

Now place a large goop of epoxy at the base of the bolt. Place the center of the cloth over the top of the bolt and work it down to the goop you just slathered below. The right hand pic above shows the end product. The fiberglass cloth will absorb the epoxy and become almost transparent – when you see that, the cloth is fully saturated with epoxy.

The slotket’s right side was easy – the left side was a pain. As the pics below show, this was pretty cramped – I decided to place the bolt up against the socket lug so its lip was over the bolt head. Using the same procedure outlined above, I dolloped and gooped it into place. This one is not so pretty as the other one. 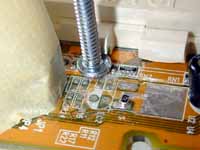 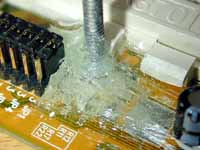 Now some words of caution:

The whole thing took about 30 minutes; I was using the card within an hour of the fix. The epoxy I used is made by the Gudgeon Brothers and is available at most marine stores. I can’t vouch for all 5 minute epoxies as to set-up time and strength.

Now on to my screen door for the next fix – stay tuned!

I was staring vacantly at the squirrels in the back yard when the aluminum clip on the screen door caught my eye. “Hmm…looks like a socket lug”. I promptly removed one and began to modify it as a replacement for a broken slotket.

If you don’t want to epoxy large bolts on your broken slotket, this is one way to fix it so that you can mount heatsinks using their clips. As the pic below shows, a screen door clip has this nice little lip on it. What I did was to use some small files to shape it like a socket lug. This entails a fair amount of filing, but aluminum is very easy to work.

When done, I then cut it as indicated on the left pic. The modified slug is fairly small so don’t sneeze on it – I put it down someplace and it took me 15 minutes to find it (right pic). 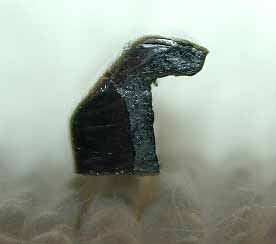 The pic below shows the finished product. I put some 5 minute epoxy down, let it set until it was tacky and then placed the new lug next to the broken one against the socket’s edge. Be careful not to get any epoxy on the top of the socket – you will glue the socket in place. 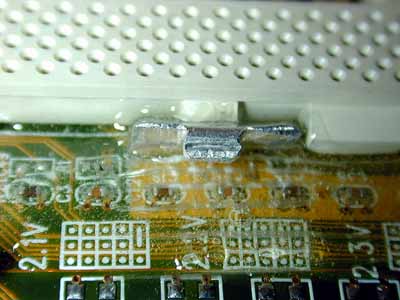 Once the first epoxy dried, I reinforced it with some strategically placed fiberglass cloth and more epoxy. When dry, this lug is way stronger than the regular plastic lugs.

I did something like this to fix a broken clip on a Nikon camera; Nikon wanted something like $200 to fix it (replace the back etc) – I shaped a bronze clip from some scrap and epoxied it into place. Great stuff this epoxy.

This Is Not Hard

From OCP: Kyle: Well, AMD gave us their OFFICIAL ANSWER about locking Durons and TBirds. “AMD’s Socket A processors (The AMD Athlon and AMD Duron processors) are produced with the multiplier locked and the correct operating frequency laser etched on

The first step is to install your chip either in your motherboard’s socket or, if you have a FC-PGA converter (slotket), into the slotket. Both motherboard and slotket will use what is termed a ZIF Socket. This is the small