On Saturday morning, the world lost a wonderful person in Dino DeCesari, aka Lvcoyote, an Overclockers.com editor and moderator. According to his wife, Dino passed away in his sleep at the age of 56.

Although he joined Overclockers.com in 2002, his involvement took a massive leap when he began writing for the front page in April 2012. Over the past 3+ years, he contributed more than 200 articles. He volunteered countless hours reviewing items and editing the articles of others for the benefit of the readers of Overclockers.com. Dino later became a forums moderator, where his calm demeanor and sage advice were invaluable to the community and myself personally.

I was fortunate enough to spend several days the past few years with Dino and his wife Jodi in-person at the Consumer Electronics Show in Las Vegas. Every year, he would drive all the way from Washington down to Arizona to visit his parents and help them with various projects/home repairs. He then drove over to Las Vegas to meet up with me and other colleagues at CES. Even though the convention tickets were free to members of the press, we were not provided any financial subsidy for hotel, transportation or food costs. Dino took it upon himself to finance his own trip each year to ensure the continued existence of partnerships among all of the manufacturers we work with and report on the latest product launches for the benefit of our readers. He was not paid for his time or services, but simply felt it was his duty to contribute to the community in any way that he could.

Matt Ring (mdcomp), Edvard (from EKWB) and Dino DeCesari (lvcoyote) at the Ice Bar in January 2014 at CES (from left to right)

In getting to know Dino both professionally and personally, I can say that he was one of the most patient, hard-working and generous people I have ever met. Along with coaching other writers and toiling over his own reviews, he spent much time working behind the scenes to help ensure the community ran smoothly. He was always the first to volunteer to wake up at 5am to publish articles on CPU launch days!

Outside of Overclockers.com, Dino also contributed to his local community. Just a few weeks ago, he was helping to evacuate friends in his area as the wildfires spread near his hometown of Omak, Washington. Not only that, he was involved in local politics serving on the City Council. His hobbies included running and leading fitness classes in his spare time, called Boot Camp. He was always giving me a hard time about getting in shape! There was no shortage of humor from Dino, despite all the serious traits mentioned previously. 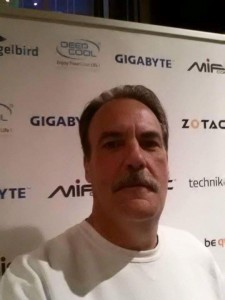 On a personal note, Dino was always the source of wisdom and inspiration for me. He always offered his help whenever I had a question about life, work or home repairs. He did a lot of do-it-yourself work at his own house in Omak, Washington, as you could imagine.

If you are interested, here is some more information from the Omak local government website, where Dino served on town council:

City Council member DeCesari has been serving since June of 2008. He enjoys helping the City of Omak and its residents maintain the great lifestyle that Omak has to offer.

Dino was born in Madera, California and raised in a military family. Growing up as a military brat, he was able to see many parts of the United States and Europe. After graduating from Kaiserslaughtern American High School in Germany, he followed in his father’s footsteps and served in the U.S. Army. Dino’s military service took him to Fort Bliss in El Paso, Texas where he worked at the Intelligence Communication Center. After his discharge, he embarked on a business career that spanned over twenty-five years. He worked primarily in the transportation industry and in some of the west coast’s largest cities including Las Vegas, San Francisco, and San Diego.

Dino moved to Okanogan County in 2002 and to Omak in 2003. He retired in 2008 shortly after selling his auto parts business. His wife Jodi, a native of Okanogan County, is the manager of a workforce development organization in Omak. His son, daughter in law, and two granddaughters live in Rhode Island.

It is impossibly to quantify Dino’s contributions to this community, but if you can mention just one thing Dino did to help, inform or entertain you, I am sure it would mean a lot to his family and friends. Anything you can share would be a great tribute to the life of someone who did nothing but give to this community, his local community and his family.