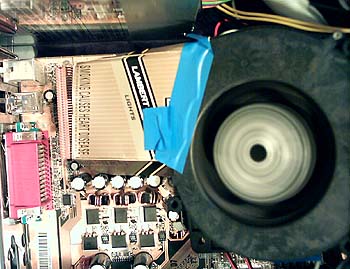 I positioned it so it runs ‘sidedraft’; the theory (mine) being flow will be less impeded if it isn’t running into a brick wall and hopefully reducing, if not eliminating, the still(ish) air around the centre of the cooling fin block (due to the vortex off of the turbine fan and it being trapped by the rushing air around the edge of the fan) resulting in much more efficient cooling. 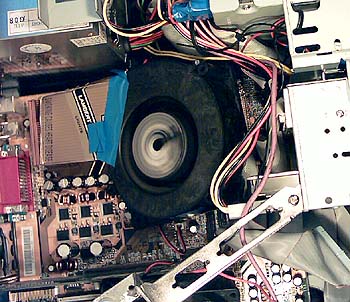 The ‘mouth’ of the fan rests at about a 45 degree angle, nicely over the edge of the heatsink with the back end slightly trimmed and held in place, in true prototype style, with tie wraps just off the hard drive. A cut down packet of cigarettes makes sure the flow is as direct as possible.

The new fan seems to flow only about 1/3 of that previously enjoyed, but with some tumble-dryer exhaust piping (suitably taut to minimise restricting flow) allowing external ‘fresh’ air to be drawn via a hole in the back of the computer case, the CPU is now running 2 C lower !! Now it’s 42C down to 40C (measured with Abit’s hardware monitor) at idle and about the same lowering (47C down to 45C) during copy/paste operations of a 1 Gb File between partitions on my hard drive to get some heat going. 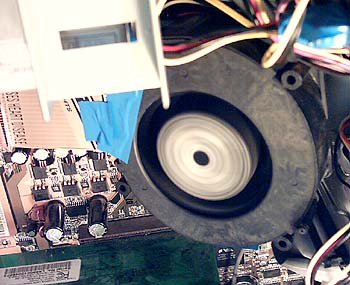 System temp is up about two degrees to 29C, but I am not running the case exhaust fan anymore (tubing in the hole instead 🙂 ), and the front mounted fan that resided where the system speaker can live (front wall, at bottom) is no longer in the computer. I have hacked out that hole to lessen restriction, along with enlarging the hole at the bottom of the front fascia as large as possible to ease air flow. System temp seems to vary no more than 2 degrees no matter what.

I can’t give any scientific proof as to the noise reduction, but I would hazard a guess (uneducated of course 🙂 ) at about 1/2 to 2/3 reduction. More tellingly, my girlfriend says there is a reduction in noise!!!! And it’s a “gentler purr” now.

The other tweak I have performed is to use a length (about 2-3 feet) of said tubing, clamped between power supply and computer case, then dragged out to keep rigid(ish) to act as a sort of exhaust. It does a nice job of nullifying the peaks and troughs, again resulting in a – perceived at least – noise drop. 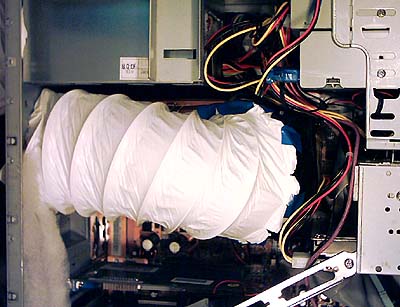 I could be real clever and find out the precise diameter and length of tubing required to do the job correctly, but the “it needs to be this long to reach” method seemed to work V.V. well. 🙂

I have also utilised some padding/insulation from a body warmer (similar to loft insulation) around the case in areas that won’t restrict air flow to absorb some of the bouncing sound waves. Open cell materials do a great job of absorbing sound waves, whereas solid materials help with vibration reduction.

The best solution is damping pads with open cell material stuck on top. If I was really clever, I would follow my own advice, but I have reduced levels sufficiently for now and will play more later when I get bored again.

Hope this all makes sense, if you have any questions (not that I’m at all clever) don’t hesitate to drop me a line.

Feel free to use any of this on the site if you think it’s of use or interest to anyone, even if only to reassure people there are people out there worse or more dopey than themselves. 🙂 🙂

Item One: A Thoroughbred Revision A 1700+ Shows Up For Sale: Newegg has them. It’s a 1700+ listed for $75, and it’s the one clearly identified as a Thoroughbred. All the codings on the Newegg webpage are consistent with a Read More

Happy Days Are Not Here Again

Both Intel and AMD have said they expect more money for Christmas than expected. While that’s certainly better than getting less money; the rate of increase is more like a lump of coal than a bunch of candy canes. Intel’s Read More