Scythe has been around since 2002 manufacturing cooling parts such as heatsinks, fans, and accessories. So, they should be a familiar name to anyone that’s been building PCs in the last decade and a half. Today, we have Scythe’s FUMA Rev. B heatsink, a relatively small dual tower cooler that strives to increase compatibility over the larger, more traditional dual tower offerings out there. The major change in this new revision of Scythe’s FUMA heatsink is that it now supports current CPU sockets from both Intel and AMD.

Fuma Rev. B is made of two towers connected via six heatpipes to the baseplate. The twin-tower structure prevents mutual heating of the heatpipes while enhancing heat dissipation to the fins. Combined with further improvements, cooling performance increases, whereas compact dimensions are maintained. Fuma is predestined for ultra-quiet cooling but is an ideal overclocking cooler as well – at a very reasonable price.

The heatsink is designed for the use of up to three fans. If two fans are used, flexible fan positioning is possible. This way, Fuma Rev. B adopts perfectly to the case airflow. Furthermore, flexible fan mounting increases compatibility – conflicts with memory modules can be avoided.

Included with Fuma Rev. B are two Slip Stream fans, a series valued by its’ customers for many years. It is characterized by its’ small fan hub enhancing the air flow. The PWM-range, adjusted to meet Fuma’s requirements, offers the best possible combination of noise level, cooling efficiency and durability.

The FUMA comes packaged in a rather informative box. The front has a good isometric shot of the heatsink along with Scythe’s logo, the FUMA Rev. B name, model number, and socket compatibility. The left side of the box shows schematics for the FUMA’s dimensions as well as a table with some of the specifications. The right side of the box details some features of the FUMA.

Along with the heatsink itself, there are two Slip Stream 120 PWM fans in the box. The accessory box includes the mounting hardware, six fan clips, thermal paste, Y-cable, and manual. I can appreciate Scythe including an extra set of fan clips for those who want to mount three fans to the FUMA.

We can see the FUMA is a dual tower heatsink with serrated and staggered fins. However, most dual tower coolers are very large in height and/or tower thickness to provide the most surface area as possible. The FUMA, on the other hand, is small in comparison to other dual towers with its thin towers and shortened height. For example, I estimated that my Noctua NH-D14 has around 37% more surface area than the FUMA.

As mentioned earlier, it is also possible to mount three fans on the FUMA which provides versatility in fan mounting. These things will all help improve its compatibility with cases, motherboards, and RAM.

It also looks like the fins are spaced further apart than the other heatsinks I have on hand. The main positive of having more space between fins is that it will reduce noise, but the downside is that there is less surface area which could reduce cooling capacity. We’ll see how that turns out during testing.

Here are a couple shots of the FUMA with the two Slip Stream fans installed. The FUMA is definitely a great looking heatsink.

Mounting the FUMA with the Hyper Precision Mounting System II (H.P.M.S II) is a relatively standard and easy procedure. The backplate is installed with thumb nuts, then the cross braces are secured with screws. Once those are in place the FUMA can be positioned on the CPU and secured with the crossbar using its fixed spring-loaded screws. The spring-loaded screws allow varying mounting pressures and help keep the FUMA level.

Sound level in dBA was measured 10 cm from the intake fan with the fan speed set to 100%. Then, sound level was estimated for other distances using the following formula:

Strictly cooling performance of the FUMA was sufficient compared to the heatsinks I had on hand to test against, but it didn’t outperform any of them. To be fair, it is up against larger, more expensive heatsinks and held its own.

Looking at the temperatures when using the 1.125 V required for my 4.7 GHz overclock, all of the heatsinks performed well. Even the highest temperature at that voltage was only around ~71 °C (51 °C ΔT) while using the FUMA paired with two Kaze Flex fans. So, there’s still some temperature room available for additional overclocking with that setup.

Notice how the temperatures didn’t change much with fan swaps on the FUMA. I believe this is a result of the wider fin spacing, and it not needing high static pressure fans for good airflow through the towers. This means we should be able to swap out the Slip Stream 120 fans for something quieter (or run the Slip Streams at lower RPM) without losing much performance. 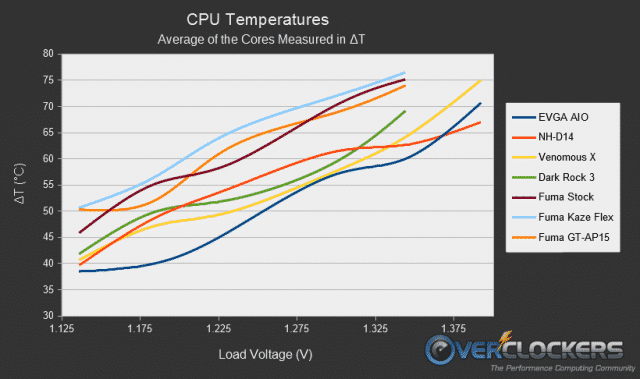 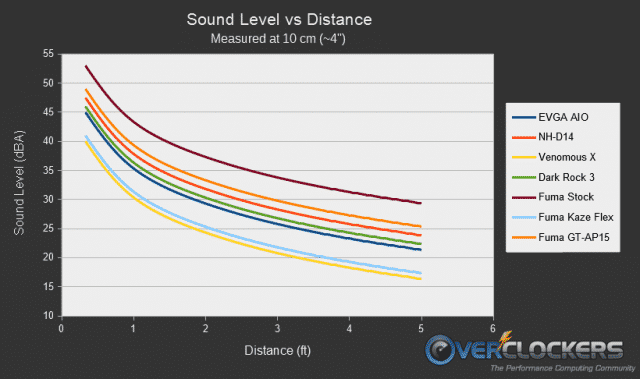 The FUMA has a premium look thanks to the nickel plating and polished aluminum top fin. Combined with the black and gray Slip Stream 120 fans, the FUMA has a neutral aesthetic that should go well with just about any build.

Scythe’s FUMA heatsink aims to provide compatibility and versatility without sacrificing much on performance. I think it meets its goals by being smaller in height with thinner towers while also having three fan mounting locations. I believe it also hits the mark on performance considering it’s not trying to compete with the high-end market.

The FUMA Rev. B MSRP is $45.95 and can currently be found for $42 at NewEgg and $42 at Amazon which seems very reasonable for what you get. Its performance was ~10 °C warmer, but much quieter (at lower RPM), than the $65-85 heatsinks used for comparison which doesn’t seem bad considering the price differences.

Overall, I believe Scythe’s FUMA would be a great option for those looking to find an affordable heatsink with a good balance between size, performance, and noise level.

With the Spire Gemini Rev. 2, we get a solid copper base sporting six 6 mm heatpipes. Will this excel in cooling or will it be another middle of the road heatsink?

Tesoro has been manufacturing computer peripherals such as keyboards, mice, headsets, and chairs for quite some time, but they don’t seem to be mentioned as often as I’d expect during peripheral discussions. However, they seem to offer some fully-featured and innovative products such as the keyboard we have for review today. That keyboard is Tesoro’s Gram Spectrum TKL which is a low-profile, compact (tenkeyless), RGB, mechanical keyboard designed to be portable while still competing with high-end gaming keyboards.

EKWB recently announced the launch of its latest All-In-One CPU cooler, the EK-AIO 280 D-RGB. Powered by an integrated SPC style pump, it features a 27 mm thick 280 mm long radiator and a pair of 140 mm D-RGB Vardar S fans.  The water block utilizes a copper cold plate with dense fins and a frosted acrylic top with RGBs underneath for light dispersion. Pre-ordering is available now with shipping expected in the second half of February. The retail price is set at $135 with free shipping to the United States. Here is EK’s press release.

Scythe has been around since 2002 manufacturing cooling parts such as heatsinks, fans, and accessories. So, they should be a familiar name to anyone that's been building PCs in the last decade and a half. Today, we have Scythe's FUMA Rev. B heatsink, a relatively small dual tower cooler that strives to increase compatibility over the larger, more traditional dual tower offering out there. The major change in this new revision of Scythe's FUMA heatsink is that it now supports current CPU sockets from both Intel and AMD.