SUMMARY: Aside from its unfortunate name¹, the Kamakaze is an OK choice for modest, low-noise Socket A/P4 cooling. 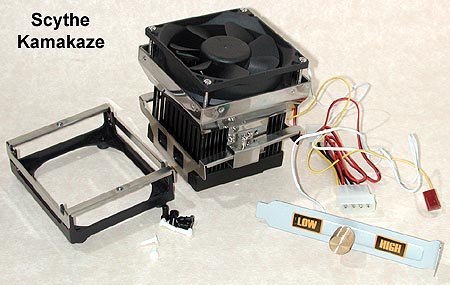 (I’m showing these stats because the conversion from metric to english measurements on their website was off.)

The good guys at Pham Computer were nice enough to send an interesting heatsink to us for a test spin, the Scythe Kamakaze. Frankly, I can’t think of a more unfortunate name¹ for a product, but that’s me.

This heatsink features a rheostat to vary fan speeds and moderate noise. I tested at the highest and lowest speeds to give an idea of how performance varies with fan speed.

Looking at the Kamakaze, I was struck by the resemblance to Alpha’s heatsink construction – the copper base is fit into the aluminum base which holds the cooling pins. The pins are oval and thinner (“nearly 500”) as compared to Alphas’s hexagonal and thicker pins: 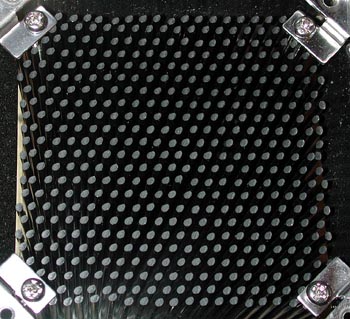 With such a dense array of pins, system resistance should be quite high – this means that taking maximum advantage of this heatsink’s surface area would require a very aggressive (ie LOUD) fan. I noticed that airflow through the heatsink with the stock fan was anemic.

The mounting system is quite good:

The Socket A mount engages all three socket lugs – always a plus. Once the lugs are engaged, you tighten two screws on each side of the heatsink:

This pulls the heatsink to the CPU core – tightening the screws evenly will avoid damage to exposed cores.

The P4 mount (left in the top picture) includes a standard Intel retention bracket with plastic push pins, should you not have one. If you have one already, you slip the metal bracket shown in the above picture over the Intel’s plastic retention bracket. The metal bracket is threaded to accept the two mounting screws described above – same procedure.

What I like about this system is that it’s very secure, easy to set up and mounting pressure is pre-set – no guesswork here.

The base appears well finished: 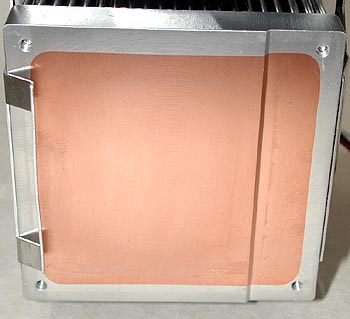 Overall, a well made product, easy to mount on P4 and Socket A systems.

The Kamakaze was tested on the CPU Die Simulator which gives results that are unaffected by motherboard influences. I measured noise with a Radio Shack sound meter placed 8″ from the fan’s intake². Noise at its highest setting was modest, and at its lowest setting I could barely hear it in a quiet room; mounted in a PC, you will not hear fan noise at the lowest setting.

Scythe’s Kamakaze is well made and an OK choice for modest, low-noise Socket A/P4 cooling; performance varies quite a bit depending on fan rpms. Once again, no such thing as a free lunch: Reduced noise = Reduced performance.

Thanks again to Pham Computer for sending this our way. This heatsink is not yet available in the US market.


¹”Kamakaze, often spelled Kamikaze means ‘divine wind’. It’s the name originally given to the mighty Typhoon that destroyed an invading Mongol fleet in the 13th century. In WWII it was also associated with the suicide bombers, which made some people believe that it actually meant “divine death”, but it does not.”

Snoot emailed me with a link to a review at Silent PC that explained this further:

“While the definition of ‘kamikaze’ was right, I think ‘kamakaze’ was more of an intended pun by the company. If you look at the two kanji’s they have on the box (‘kama’ and ‘kaze’) it’s not the kanji for ‘kami’ (deity), it’s ‘kama’ which is the kanji for scythe or sickle. So it’s means ‘Scythe Wind’ and not ‘divine wind'”

Frankly, while correct, I’m afraid the distinction is not readily apparent to others.