The Kaze Master II box is very informative and showcases the fan controller and its features well. The front of the box shows a picture of the Kaze Master II and lists four new features at the bottom. The back side shows an image of the back of the Kaze Master II with close-ups of the heatsink and dip switches. There’s also “outside of Japan” warranty information and warning info listed on the back. The sides list the specifications and the included accessories.

The controller itself and accessories are protected by foam with the controller being isolated from the accessories to prevent any scratches to the unit. The included accessories are: the poster-like manual, Molex power cable,  four fan cable extensions, six temperature sensors, and screws for installation. Interestingly, there are six temperature sensors included even though the Kaze Master II is only a four channel controller. It’s always nice to have extras in case one quits working or gets lost.

Installation is standard as far as 5.25″ bay device go. Removing a spare bay cover and side panels from the case, slide the controller into place, and mount it with the four included screws. Pretty simple. In my opinion, the Kaze Master II looks really nice, especially when the knobs are retracted and the entire controller is flush with the front of the case.

The display is very clear and easy to read. There aren’t any options for different colors like other fan controllers out there. The fan RPMs are displayed in 30 RPM increments, and the temperatures are measured to a tenth of a degree. The temperature sensors are pretty accurate compared to my Fluke 52 II with a K-type probe, the difference is under 1 °C between the two.

Typically, when checking viewing angles, the LCD screen is the limiting factor. However, with the Kaze Master II, the screen sitting back away from the front surface is what limits it. The LCD screen itself doesn’t change at different angles,  but the screen is unreadable at extreme angles because the screen sits back away from the front surface and the frame block the view of the screen. You can tell in the pictures below that the top half of the RPM reading is cut off by the top part of the front frame.

The alarm works well and as advertised, sounding whenever a channel is reading 0 RPM or it has reached the set temperature. The beeping is quite loud, so it should definitely get your attention if you’re in the same house as the controller. Setting the alarm is pretty simple due to the use of dip switches. The first three switches control the temperature at which the alarm will sound, the fourth switch controls the temperature units, and the fifth switch turns the alarm on and off. Below is an excerpt from the manual on setting the dip switches.

The following chart shows the voltage drop as the channel load increases. The green line is just a reference for the 12 V rail when the PSU has nothing plugged into it, which is 12.30 V. The red line line shows how the input voltage (12 V rail) changes as the fan controller is loaded. The blue line shows how the output voltage to the fans changes as more fans are added to the channel. So what we want to look at is the difference between the input voltage (red) and the output voltage (blue). The voltage drop varies from 0.07 V to 0.91 V as the channel’s load varies from 0.996 W to 12.216 W. 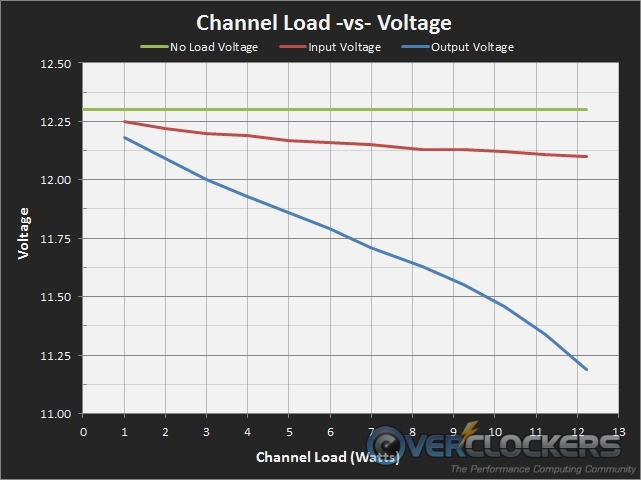 Here’s the hard data used to make the chart above, plus a couple more metrics calculated from the recorded data. If we look at the voltage drop as a percentage, we have 0.57-7.52% voltage loss depending on channel load. I also listed the voltage drop per 1 W of channel load for each increment and it averages out to be 0.066 V lost per Watt of load on the channel. Also, this voltage drop is within Scythe’s rating of 12 V ± 10% (10.8-13.2 V).

Scythe’s Kaze Master II is a very sleek and capable fan controller. It can control up to 48 W of fans across four channels (12 W per channel), which should be enough power for the majority of users. The alarm is a great feature to let you know something is wrong in case temperatures get too high or the RPM reading reaches zero(0) for some reason. The “Spin Up” voltage starts fans that require more voltage to start than to run, in the situation where there are high-powered fans turned down below starting voltage during operation. The dip switches makes it very easy to set the display and set the alarm, much better than the jumpers used on the original Kaze Master. My favorite feature of the Kaze Master II is its retractable knobs; I can’t count how many times I’ve been annoyed that cases with front doors and fan controllers with knobs are incompatible with each other if I want to retain use of the case door. As far as I know, it’s the only knobbed fan controller suitable for people with a door that covers the 5.25″ bays on their case.

The downside to the Kaze Master II is that it can have quite a bit of voltage drop under load up to a maximum of 7.52% of the input voltage, that’s almost a 1 V drop. So, if you are maxing out your channels with fans and plan to run them at full speed, then expect to be running your fans closer to 11 V than 12 V. Remember, this voltage drop is within Scythe’s rating, so the controller is performing as advertised. This drop in voltage isn’t a “deal breaker” for me, since, realistically, I won’t be maxing out all four channels at once, and most other users won’t be either. Rather than putting all fans on a single channel to max it out, the fans can be spread across the four channels to reduce to voltage drop. So, the 7.52% voltage drop is a worst-case scenario.

A quick search shows that the Kaze Master II can be had for around $50 ± $2 ($52.99 @ newegg.com), a little more than I expected for a controller with 12 W channels. However, the controller does have some nice features and looks great, which could justify the price.

Overall, the Kaze Master II is a good fan controller from Scythe and a definite step up from the original Kaze Master. I think the Kaze Master II could be a little better in the channel rating and voltage drop department for the price, but it performs as advertised and works well at what it’s meant to do, control fans. 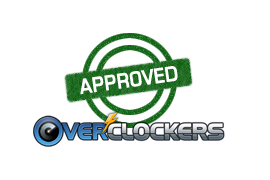 Today, Scythe released an updated version of its venerable Fuma 2 CPU cooler. The Fuma 2 Rev.B maintains the same dual tower design but now features a pair of Kaze Flex II 120 mm PWM fans. With rotational speeds up to 1500 RPM, an increase of 300 RPM, the new Kaze Flex II fans produce up to 67 CFM for increased cooling capacity. The updated Fuma 2 Rev.B is also now compatible with Intel’s LGA1700 socket, making it ideal for a 12th Generation Core processor. Amazon currently has the new Fuma 2 Rev.B for $65.99. Below is Scythe’s official press release along with a link for more information.

Noctua has released the NF-A6x25 5V fans. Unpacking the numbering system a bit, that means they are 60 mm fans that operate at 5 volts. They come as 3-wire voltage-controlled and 4-wire PWM fans that are 25 mm thick. Cute little ol’ things, you say? Well, as we see smaller and smaller form factors, this kind of fan should find great use. So let’s check out these little fans and see how they do.

Scythe has really been pumping out the new products. At the time of this writing, they were up to eighteen products for the year. Today we are looking at the Kama Panel 3.1. This is a clever 5.25-inch front panel that allows you to move your controls from the top of a case to the front. And it expands your computer’s versatility while it does so.

Not bad, but i still think i prefer the Fan Controller FC5V2.

Although i thought i would need a controller, currently with just case fans, my mobo has enough connections to handle all my fans, so ive not bothered to get one. If i decide to add lights and such tho i may get one.. but i dont see me needing one anytime soon.

Nice review. I had looked at some samples and reviews of "knobbed" controllers as I like the knobs myself for various reasons, even on autos and appliances. But couldn't see fitting a knobbed controller into my Phantom (with the door intact). So just a few weeks ago bought an Aerocool Touch 1000 (which performs as advertised) to add more fans, and probes, in excess of what NZXT provides as a built in controller. Reading your review, hmmm, too bad I didn't wait as I like what I see here. Even some old-school dippies.

It's really hard to choose between the Kaze Master II and FC5v2. I have the FC5v2, and I'll be keeping it so I won't have to worry about channel wattage if I add and/or upgrade my fans. I have quite a few fans including high powered ones as well.

I really like the knobbed controllers over sliders and touchscreens as well, and the dip switches are SO much easier than trying to fiddle with jumpers in cramped spaces.

This controller is actually for sale in the classies right now, and I plan on putting any profit back into the frontpage.