Scythe has brought to market another revision of its acclaimed Mugen 5 heatsink, the Mugen 5 ARGB Plus. In this update, the changes are mostly cosmetic now sporting an ARGB top cover and two ARGB Kaze Flex fans. However, this revision includes two fans with a higher maximum speed than the single fan used on the previous revision. We’ll check out the new RGB implementation, and see if the dual fan solution improved performance.

Scythe’s packaging is always loaded with information to ensure sure potential buyers have everything they need to know about the heatsink before they buy. On that front, there is an excellent isometric picture of the Mugen 5 ARGB with two Kaze Flex ARGB fans installed. Of course, Scythe’s logo is in the top right, compatibility is listed in the bottom left, and ARGB support is in the bottom right. On one side, we have detailed specifications and dimensions for the heatsink, fans, and ARGB connectors. The other side highlights three features, including the ARGB control box, ARGB equipped Kaze Flex fans and top cover, and a good view of the asymmetrical design for the Mugen 5 ARGB.

When opening the box and unpacking the Mugen 5 ARGB, we first remove a flat box that includes most of the accessories. Then, we have one of the Kaze Flex ARGB fans and a small cardboard-wrapped bag with the ARGB control box with its cables. Next, is the other Kaze Flex ARGB fan.

Finally, we have the foam-wrapped Mugen 5 ARGB. Overall, the packaging seems really well thought out with plenty of protection for the heatsink, fans, and accessories.

The accessories include an installation manual for the Mugen 5 ARGB, user guide for the ARGB control box, hardware bag, Y-splitter for the fans, a long screwdriver, and the ARGB control box. As with the Mugen 5, it’s good to see a screwdriver is included since it’s almost required to install the heatsink (a small wrench might work, but I haven’t tried). The bag has a tube of thermal paste, backplate, Intel/AMD brackets, press-fit spacers, screws, and two sets of fan clips for the two Kaze Flex ARGB fans.

The fans included with the Mugen 5 ARGB are PWM versions of the Kaze Flex 120. These fans run up to 1,500 RPM and consume 2.4 W of power (the previous Kaze Flex ran at 1,200 RPM). As far as looks go, it has a black frame with translucent blades for the RGB lighting and a Scythe logo on the hub.

The corners on the fans are rubber which minimizes or even eliminates any vibrations that could occur while the fans are running. When looking inside of the fan hub, we can see the RGB LEDs are lined around the hub to project light onto the fan blades.

This last picture just shows the fan’s connectors, which include the PWM connector for power/speed control and the RGB headers to link the fans together and connect them to the control box.

The Mugen 5 ARGB is made from aluminum and nickel-plated copper which gives it a uniform metallic finish. There are six heat pipes forming a u-shape through the base with the ends capped off with the ARGB top cover which completely hides the ends. Just like the non-ARGB Mugen 5, the fin stack has 39 fins with a density of around 10 fins per inch, so there’s plenty of room for airflow across the heatsink. We can also make out some of the asymmetrical design and notched edge, but we’ll get a better side shot and bottom shot in a bit.

With a bottom view of the Mugen 5 ARGB, the asymmetrical design can be seen in more detail. The heat pipes bend towards one side placing the fin stack off-center of the base. This, along with the notched bottom edge, allows for better memory compatibility and easier access to the DIMMs.

Again, just like the Mugen 5, the base of the ARGB version isn’t quite a mirror finish, but still really smooth.

Here are a few pictures of the Mugen 5 ARGB and Kaze Flex ARGB fans with the lighting mode in its default “Rainbow” mode. In this mode, the colors are constantly changing and flowing around the hub and top cover.

Scythe’s ARGB control box looks similar to all the other control boxes out there from other manufacturers, but there are two unique features to Scythe’s implementation. The first is the two magnets on the bottom which allows you to attach the control box to any steel parts of your case (magnets won’t work on aluminum since it’s non-ferrous).

Now, we’ll go through a mock installation to show all the steps involved when mounting the Mugen 5 ARGB. The first step is to mount the backplate onto the motherboard with four thumbscrews. You’ll need access to both sides of the motherboard simultaneously to hold the backplate in place while securing the thumbscrews. They can then be tightened down with the included screwdriver.

Once the backplate has been installed, the cross braces are secured with four screws and the included screwdriver.

The next step is to apply thermal paste to the CPU, and Scythe kindly includes a tube of paste for those who may not have any. I personally use the “dot” method of applying thermal paste by using a blob of paste the size of a small pea or so in the center of the CPU and let the pressure of the heatsink spread the paste across the CPU. Once the paste is applied, we can mount the Mugen 5 ARGB by using the screwdriver and alternating between screws every few turns to apply pressure as evenly as possible until the heatsink is securely mounted.

Why estimate sound level instead of measuring at further distances? It’s because the meter I’m using is most accurate between 40-130 dBA, so I needed to measure really close to the source to make sure my readings were within that range to get the most accurate measurements.
qwerty

Performance of the Mugen 5 ARGB is as expected, in the range with the other heatsinks. Looking at the middle-of-the-road Vcore (1.225 V), all of the single-tower heatsinks have virtually identical performance. Then, as the voltage is increased, the Mugen 5 ARGB separates from the rest of the heatsinks leaving it and the Venomous X as the best single-tower heatsinks. Of course, the dual-tower coolers, FUMA and NH-D14, have some separation in the form of allowing more heat before the CPU throttles. The liquid coolers easily outperform the heatsinks as seen by even more separation. 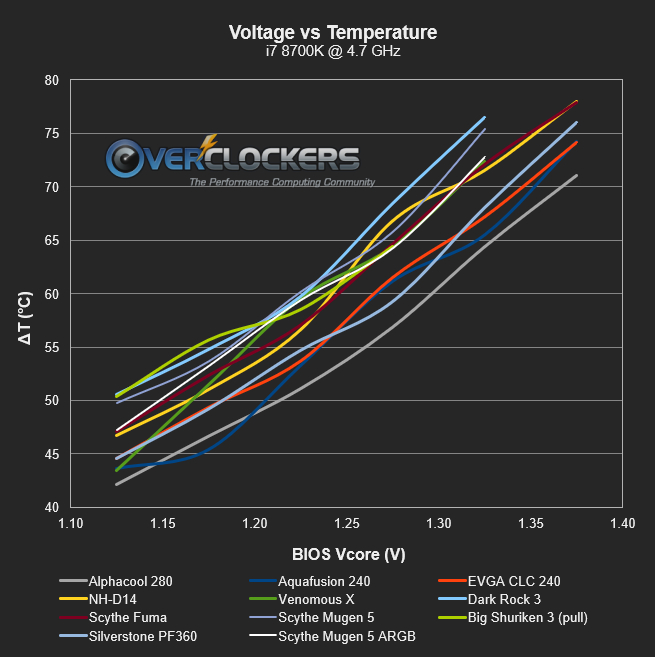 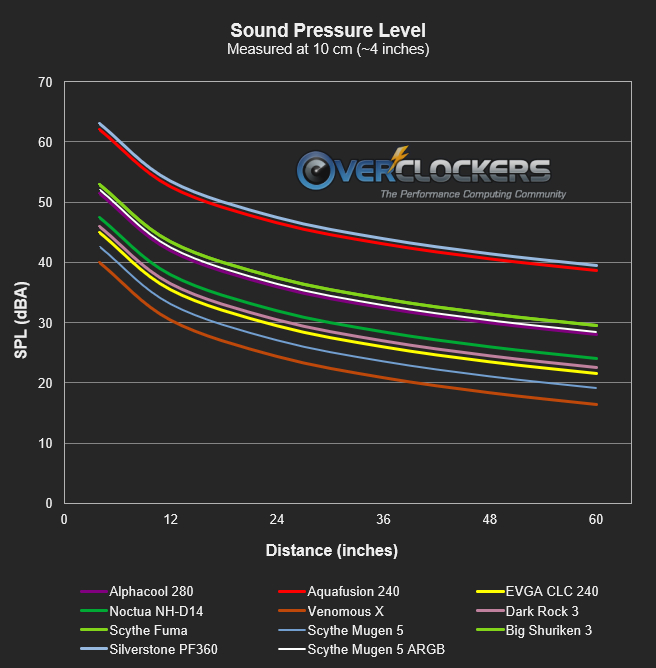 Scythe’s Mugen 5 ARGB is a great looking cooler with a bare metal aesthetic combined with ARGB on the top cover and fans. This means the cooler can be adjusted to match your build’s theme throughout its life and component changes.

Some features of the Mugen 5 ARGB that I can appreciate are (1) the long screwdriver for installation so the customer doesn’t have to worry about that after purchase, (2) the ARGB control box can be connected to the reset switch for lighting adjustment without having to open up the case, and (3) the ARGB top cover makes it easier to appreciate the lighting modes through a side window.

The included Kaze Flex ARGB fans run at a higher RPM (1,500) than the standard Kaze Flex (1,200) fan used with the Mugen 5 non-ARGB. The higher speed combined with a push-pull fan configuration resulted in a noticeable noise increase, but also a noticeable temp drop during higher heat loads. These fans also kept the rubber corners to help prevent any additional noise that could be caused by vibrations.

Performance-wise, the Mugen 5 ARGB falls closely in line with its brother, the Mugen 5 Rev. B, which was to be expected since the only change that would affect performance is using two higher-speed fans. The effect of that change can be seen in the graph where the plots for the Mugen 5 and Mugen 5 ARGB start and continue to diverge as the heat load is increased. At one point there is a 5C difference between the two, though the average is smaller.

The Mugen 5 ARGB has an MSRP of $79.99, which is $30 more than the standard Mugen 5 Rev. B. That $30 extra goes toward supplying two upgraded fans (higher speed and ARGB), adding an ARGB top cover, and including an innovative ARGB control box. For the price, there are three better air coolers in my testbed: the Noctua NH-D14 ($80), Scythe’s FUMA Rev. B ($42), and Thermalright’s Venomous X (discontinued) all perform either same or better for equal or less money. So, what you get is a $30 premium for ARGB and a performance boost over the original Mugen 5 Rev. B.

Intel is back today with a new CPU manufacturing process at 22 nm using their new 3D Tri-Gate transistor design. It’s the Sandy Bridge micro-architecture with a new 22 nm twist. Will we see any performance increase or just the standard lower power and better temperatures? Sit back and relax while we cross the Ivy Bridge.

Intel is back with a new socket 2011 processor. After what seems like a long wait since Sandy Bridge-E, which launched in November, 2011, we now have Ivy Bridge-E, Intel’s newest top tier line of CPUs. Much stays the same with this platform, but there have been advancements too. Is it enough to make you upgrade from Sandy Bridge-E, or to invest in a socket 2011 platform in the first place? That’s what we’re here to help you figure out!