“A silent, reliable source of power suitable for use in an overclocked environment” – Tom Akita 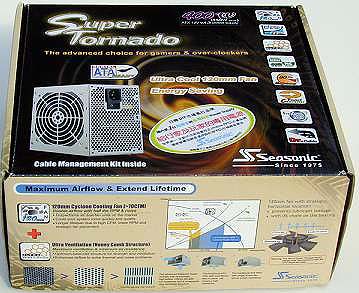 For the user seeking a silent, reliable source of power suitable for use in an overclocked environment, there haven’t been many options until Seasonic implemented its “Smart & Silent Fan Control” (S2FC) method of fan control in its line of ATX power supplies. Since then, Seasonic has developed new, more efficient power supplies with Active PFC and innovations, such as the honeycomb grill on this article’s test subjects, 2 Seasonic Super Tornado 400w PSUs. 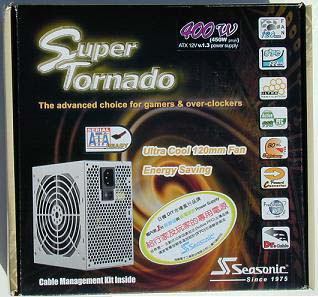 Seasonic has obviously taken great care in the packaging of this product. The outside of the box is very attractive, showcasing a complete list of the unit’s features and advantages over other power supplies. Flip over the box and the consumer is met with a clear, coherent explanation of the features of the unit. Inside the box is the PSU itself, the included “Dr. Cable” cable management kit (plastic cable wraps in two sizes, an adhesive-backed clasp to secure the cables and some zip-ties), the manual (which makes installation a snap), SATA power connecter, power cable and screws.

Also, the Super Tornado doesn’t have a switch to toggle 115V and 230V because it chooses the voltage for the user automatically.

The Super Tornado’s 80% efficiency rating allows it to run much cooler than other PSUs (up to 40% cooler, according to Seasonic), which means that the 120mm fan on the unit (which most other manufacturers don’t use) doesn’t have to spin nearly as fast as on other PSUs. The high efficiency rating also saves energy. 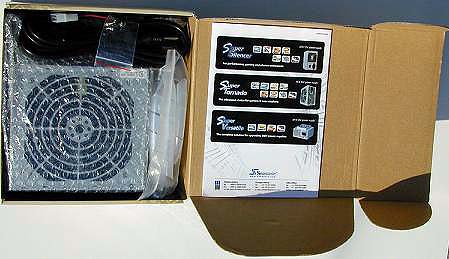 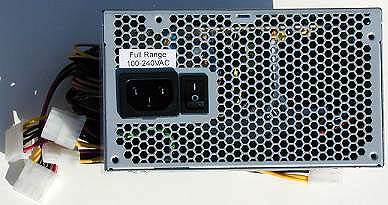 WOW! This power supply is so much more quiet than my Antec TrueControl 550w. When I first powered on my computer, I wasn’t sure if I had connected all of the fans, but when I opened the case to check and see if everything was spinning, I realized that the power supply had simply made a huge difference in the noise coming from my computer. The 120mm fan in the Super Tornado is a big upgrade from the 92mm and 80mm fans in my previous Antec PSU, even when the Antec was at its lowest fan speed. 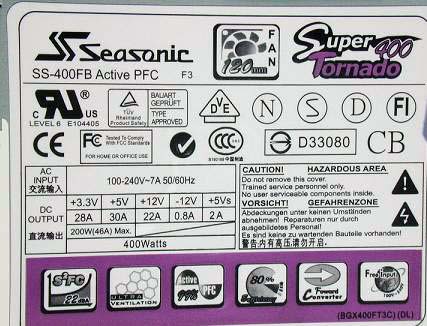 Summary of test results from the first unit tested.

Tests were performed at 1836 MHz and 2206 MHz under both idle and load conditions. Idle testing was done after about 1 hour of up-time, and load testing was done after 38 minutes of playing Unreal Tournament 2003. As can be seen in the chart above, the output from the PSU’s voltage rails are very close to specification at both speeds. While there isn’t a significant fluctuation in rail output from idle to load conditions, it should be noted that the monitoring done with Motherboard Monitor 5 (MBM, MBM5) reported the reading from the +12V rail as 11.73-11.86V in all tests.

This seemed a little low, so further monitoring done in the BIOS (version 1005) reported the voltage from the +12V line as 12.41V at both 1836 MHz (idle) and 2206 MHz (idle). Load testing was not performed in the BIOS because it can’t be accessed fast enough to accurately record power output under load conditions. The Super Tornado performed just as well when the CPU was overclocked as it did when it was run at stock. Also, no stability issues (blue screens, freezes, restarts) ever occurred. 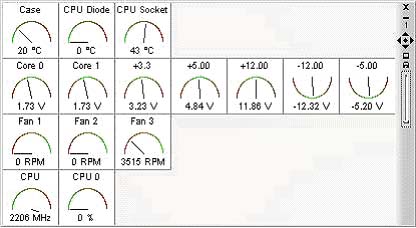 During testing, I noticed that the PSU seemed to get louder as the CPU’s idle temperature was reached. After further use, I looked through the manual (which was very clearly written, by the way) and discovered that the PSU fan speeds up as the case temp gets warmer. About 3 minutes after the POST, the fan on the Super Tornado is really close to being silent. After about 20 minutes, the PSU fan begins to spin faster.

At this speed, I can hear it over my case fans but it’s still very quiet. I also noticed a high pitched whistling noise coming from the fan of the power supply, even when the fan was running at the lowest speed. While this whistling noise is very, very quiet, it is audible. I found it a little irritating, but after a while I just forgot about it. 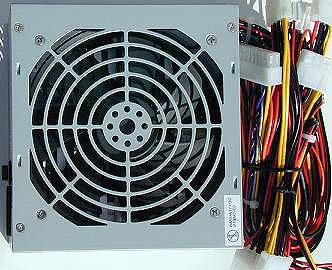 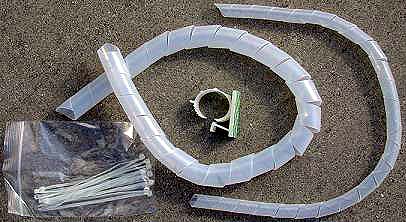 A second unit has been tested for consistency.

The results from the second PSU are very close to those of the first, except for the +12V
reading in MBM, highlighted in red.

The second unit tested was practically identical to the first in terms of noise and rail consistency, but the +12V reading during idle at 1836 MHz was unsettlingly low on the second unit. However, the +12V rail at 1836 MHz was reported as 12.35 by the BIOS a minute later. Normally, a reading that low on the +12V rail would be concerning, but since the BIOS reports it as 12.35, and since there weren’t any stability issues during testing of the second PSU at both speeds, that reading taken by Motherboard Monitor can be omitted from consideration because it might be inaccurate (also, it seems odd that I would get the lowest reading while running idle at stock speeds).

-Thanks to Kevin Compton at SeasonicUSA for providing me with the two units tested.
-Thanks to Joe Citarella and all of the other guys at Overclockers.com for hosting this review. 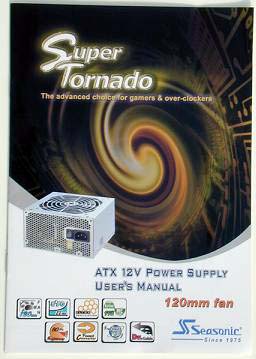 Unfortunately, it looks like too many people are too busy choosing sides and not thinking. AMD760 enthusiasts apparently want you to believe that all Via boards are going to be losers. We don’t know that yet. What we do know Read More

Do It For The Competition

If science isn’t a big enough reason to fold, would a bit of friendly competition sound like fun to you? Last month, you may remember how we appealed to Overclockers.com readers to use idle CPU cycles going to waste and Read More

The following is a review of the Asus M3N centrino notebook. I bought this machine on Ebay, it was an open box barebones kit. The specs on the M3N (and mine in particular) are as follows: Processor Type : Intel Read More