Probably the first to do this – Ken Hyatt 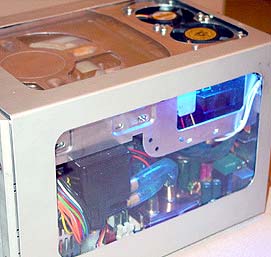 The balance between noise reduction and good cooling has been a goal since
buying a Shuttle SV25 about eight months ago.

The first effort was to quiet the noisy PSU fan by swapping out the 5K rpm
20MM thick fan with a quieter 40mm x 10mm from a video card. Much better,
for a while. That was followed by replacement of the stock HSF with a
Zalman Flower, with 60mm side-mounted fan (which led to loss of a drive
bay). A Zalman Fan-Mate was used to reduce the RPMs on the rear case fan.
Much better, for a while.

My main rig has been liquid cooled for almost two years, with parts from a
variety of manufacturers. In the course of trying different pumps and
radiators, I started using components from SystemFx, Inc.

The small radiators on their site started me thinking about liquid cooling
the SV25. After a long exchange of e-mails and photos of the Shuttle
internals, Harley (of sysfx) agreed to give it a try. Since I needed to be
in Ft. Lauderdale for business, we made a date for the install.

The airlines weren’t kind to the little machine. The cover was slightly
dented and the chassis was racked after the trip down to Florida. After
straightening things out, one of the first things we talked about was the
need to see the water works. 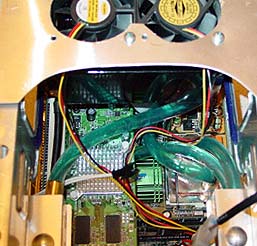 So, three windows were cut into the
cover and covered with Lexan. Two nice, four-inch cold cathodes with a
sealed inverter were installed for lighting effects.

Competition for space among parts is very keen in these Shuttle machines.
To get maximum airflow, Harley decided to mount the 2 x 60 mm rad with
the fans turned towards the top of the case. The 110 volt connector was
relocated to a new back-plate, which also included a louver for air intake.

All plumbing is 5/16″ ID, which facilitated the tight turns needed for
hook-up. The in-line pump 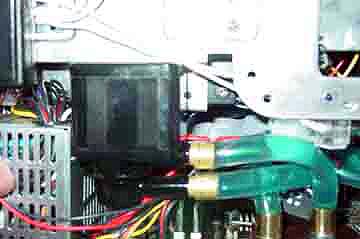 circulates about 115 gallons per hour.
Filling/Bleeding is handled by a fill-port 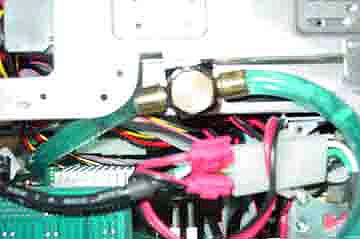 on the opposite side of the
system. The water block 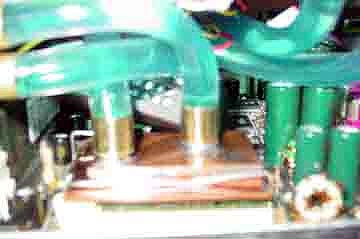 is oxygen-free copper, and is held in place a by
spring clamp that was custom bent to remedy a problem with a broken socket
lug. 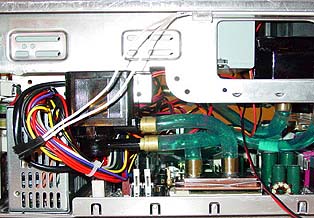 One of the nicer parts of the system is the method used for powering the
pump. The Shuttle has 110 volt wires that are easy to access. The sysfx mod
kits tapped right onto the black and white power leads, then quick connected
to the pump. A relay kit was installed to control pump power with the ATX
power switch (no extra wires hanging out of the rig, no need to worry about
non-knowing types burning up my rig).

The top window wasn’t really seeing a lot of water-cooled action, so it was
decided to mod the Combo CDRW/DVD drive with a window. 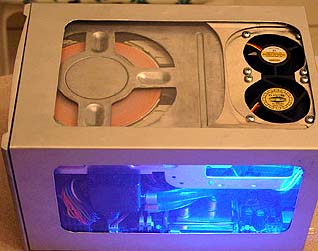 A couple hours with
a Dremel produced a nice brushed metal looked that went well with the
aluminum cover (thanks Mo). 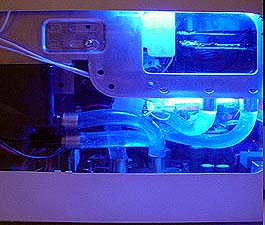 Is it quieter? Yes, with the two 60mm fans on a Fan-Mate, the PSU fan is
the loudest part of the system. Overall noise level is comparable to a Dell
desktop system.

Why an SV25? It’s what I have. It’s a secondary system (though it’s my
favorite now), used for web surfing, and occasional Photoshop and
Illustrator work. 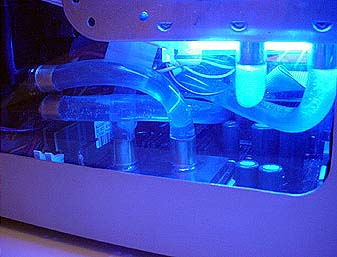 There are a few instances of liquid cooled SFF machines. I’m fairly sure
that this is the first documented complete system in North America. Even
better than that was the fun of putting all together, visiting with other
modders, and using it every day.

If you want to go the liquid cooling route with your SFF machine, sysfx
parts are an ideal starting point.