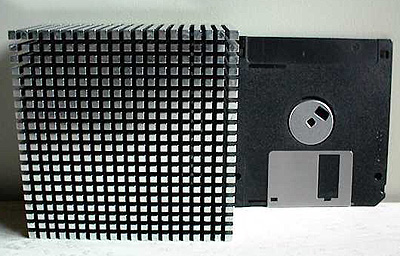 The Heatsink (view from top)

The Heatsink (view from side)

This monster is made of a single 100x100x50mm aluminium block. Each of the 400 fingers is 3x3x39mm great except the outer fingers (4x3x39mm) and the four fingers (4x4x39mm) at the edges. The effective cooling surface (without the bottom side) is ~ 0.2 square meters. We used a CNC-milling machine for cutting the slits. 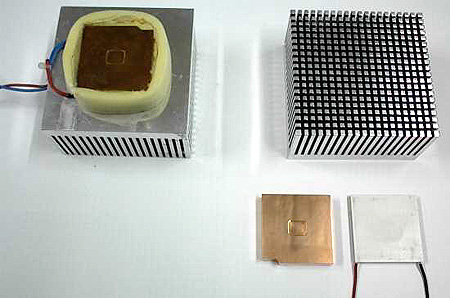 The left one is already mounted and thermal isolation preventing condensation is added. These copper plates are prepared to fit perfectly on a flip-chip CPU, e.g. Pentium III (Coppermine) or Celeron 2.

In the middle you see a “normal” Socket 370/7 heatsink. The biggest problem will be to fix the heatsink sandwich on the CPU. We are going to mount the heatsink in the tower-case (some screws into the power supply or something like that) and press it with a spring on the CPU. 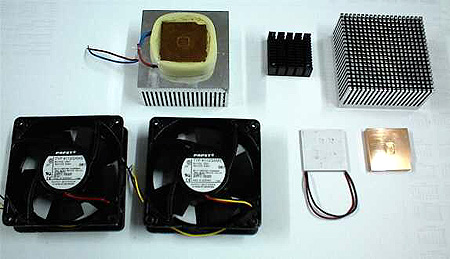 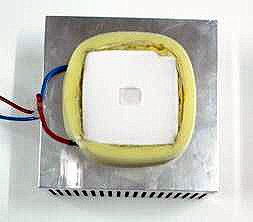 This test run was made with an simple 92x92x25mm 2.6W fan (no name). After a few minutes, the copper plate was coated with ice. The cold side has a temperature of ~ -15C. The ambient temperature for this test was ~ 21C. The heatsink’s temperature after 30 minutes was 38C with 123 watts loaded. Thermal resistance was less than 0.14 K/W. For this picture the fan was removed.

The thermal isolation is working well. 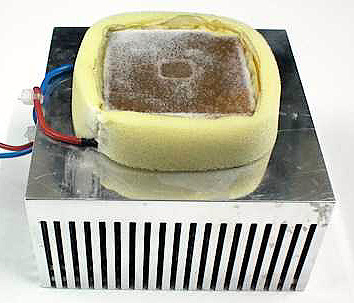 After power-off, the ice melted within 15 seconds. There was no condensation except at the top of the copperplate (where the CPU will be mounted later).

Unfortunately, we have not tested this monster with a CPU because we don’t have a socketed CPU for now. 🙁 We decided to buy a socketed one in February 2001.