SUMMARY: The Senfu is diminutive in size but not performance – definitely worth serious consideration but only with a stronger pump.

Just to recap, I received the Senfu Kit a couple of weeks ago but found a leak in the radiator, so I could not test it out. I found the pump supplied with the unit to be totally inadequate to the task. Yesterday I received another radiator and stronger pump and proceeded to test it out.

For this test, I decided to stress it more than what a PIII500E would do. I first used a one peltier test rig but then decided it was not enough so I used a two peltier stack – one on top of the other. This effectively produced about 100 watts of heat – a nice test similar to what you might get with an Athlon hot-plate.

The first run I used the Senfu pump – this is the weakest part of the kit. It proved to be balky (I had to literally jump-start the pump at first – maybe because it was new) and incredibly noisy. Further, it was barely adequate – if you have more than an 18″ lift I doubt it will do the job. I didn’t pursue testing any further with this pump – my strong advice is don’t buy this pump.

I purchased a Danner Supreme Mag Drive pump model #1.5 (Also called the Supreme Pondmaster) for about $25; this is rated at 140 gph @ 1 foot. You will not get 140 gph as this is the unrestricted flow rate – as you will see the actual flow rates are markedly lower, but what is important in selecting a pump is its ability to pump water through all the piping in the system at a decent rate. Note that pumps in this range all have at least a 3/8″ outlet diameter so you will have to step-down to the 2mm hose diameters used in the Senfu unit, as the picture below shows.

I tested the Senfu against the CoolChip water jacket – both are aluminum although the CoolChip uses ¼” tubing. I used two different radiators – the modified Senfu Radiator which uses 3/8″ tubing and the 2 mm unit. The table below shows results under each test condition:

Frankly the Senfu’s performance surprised me – I was expecting that the 2mm tubing would severely restrict water flow and adversely affect performance. What I found was the opposite – any performance restriction is due to the inadequacy of the pump. There is no doubt that, all things being equal, larger tubing size is better. However, the Senfu’s design is clearly a big factor contributing to its performance.

I think the high ratio of water to aluminum gives the Senfu a definite performance advantage relative to its diminutive size. Note that with the 2 mm radiator the Senfu pumped 6.8 gph compared to the CoolChip’s 8.5 gph, but the Senfu was 2.3 C better than the CoolChip. Note also that the Senfu did perform marginally better with the 3/8″ radiator.

Senfu’s CPU Water Cooling Kit (without the pump) is a very credible “off-the-shelf” solution. The water jacket is about the most flexible design around – it can be used with any CPU out there. However, no doubt that performance can be enhanced with the tweaks outlined above. I would prefer to see clamps used to secure hoses rather than the Senfu’s screw collar, but I did not have any leaks while testing. I would also prefer larger tubing as it is more readily available and easier to mate with stronger pumps.

Senfu has been marketing their Water Cooling Kit in Asia and it is showing up in North American markets (one place that has it is Innovalue). I received their heat exchanger, radiator and pump to review; unfortunately the radiator had a leak and I am unable to do a full review until I receive the replacement. However, I thought it would be interesting to cover what I found so far.

The picture below shows the heat exchanger kit – it includes the water jacket, backing plate, screwdriver, mounting clips and various screws to allow mounting for socket 7, PII, PIII and Athlon cooling. It is quite nicely done and includes 3 meters of clear plastic hose and enough insulation to cover a number on installations. 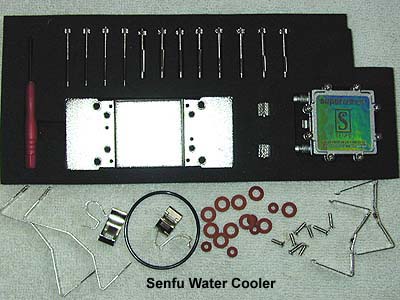 The water jacket is cast aluminum – note that the top screws on and water integrity is by an “O” ring. I tested it with the supplied pump and a stronger one and observed no leaks. The inlet/outlet diameter is about 2mm, not a lot for a high water flow; how this translates to cooling efficiency will be a key element to test.

As you can see from the picture below, it is not very large – it will cover a Celeron slug and not much more. You have to wonder if its cooling capacity is enough to cool hot Athlons. 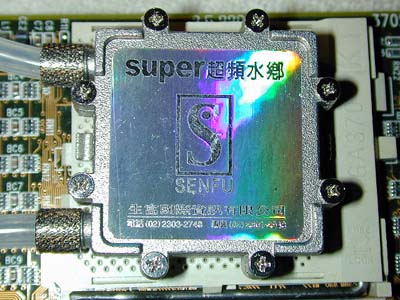 The pump is rated from 50-200 lph – I would be surprised if it could hit this rate under any kind of pressure – a liter/minute would be generous. One thing that became clear right away is the pump is totally inadequate to the task. I tested its ability to lift water and found that it could not pump water more than 8″ above the pump. This means that if you placed the pump at the bottom of your case, water would not make it to the water jacket to cool the CPU. 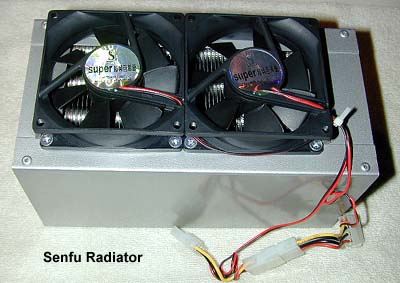 The third major component is the radiator which looks superb. This is the two 80 mm fan version and it pumps a lot of air through the coils. The fans pull air through the coils – I reveresed them to blow into the coils. The problem I foresee is that the inlet is very small – it can not sustain a high flow rate (see picture below) at any pressure we are likely to see with available pumps. In addition, considering its length, it will take a hefty pump to move water through its coils. 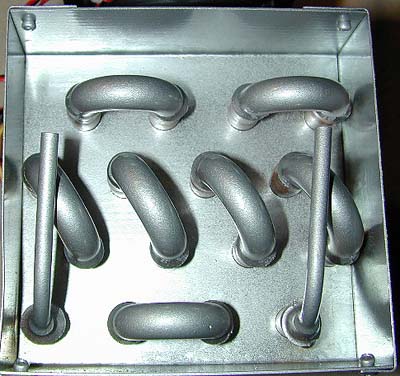 Because the radiator was leaking at the joint of the small inlet/outlet tube, I decided to salvage the radiator by cutting the small tubes off the radiator. This required a fair amount of metallic surgery. I had to cut away a portion of the top enclosure to get at the tubing and then use my Dremel to cut the tubing off at this point. As the picture shows, I was rewarded with an unrestricted inlet/outlet pipe which requires a 3/8″ inside diameter hose. 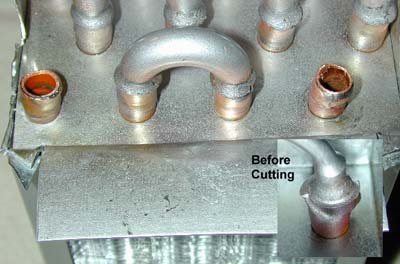 I have a 150 gph fountain pump which I used in some earlier water cooling and found it to be the right ticket for this radiator. I will be developing a system around this setup using another socket 7 water jacket that can accommodate larger hose diameters and will report on this setup soon.

I should receive a stronger pump and replacement radiator from Senfu in about two weeks; until then I would recommend anyone contemplating a purchase to sit tight.

Cheese it! It's The Coppers, ORB!