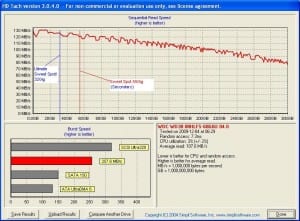 Look at the image above. (It’s a WD3000HLFS 300gig VelociRaptor) From this picture we can determine that the ultimate sweet spot for this drive is around the 32gig location and at about the 55gig location would be the sweet spot with more space, just with a slightly slower access time.  55 x 2 is 110gig boot drive (about 102gig formatted), plenty of space for a boot drive for any OS.  By doing this (short stroking) we can use the fastest part of the drive for incredible boot times. I have started a list of drives for RAID 0 short stroking. You can do up to 6 drives in RAID 0 using the ICH10R chip. However, by going to a fourth drive in RAID 0 you add higher latency. That may be overlooked due to the data throughput of the RAID array. Three drives in RAID 0, seems to be the sweet spot. Short stroking 3 drives in RAID 0 would be  utterly incredible!

In the RAID firmware (Control+I for Intel), you’ll need to setup a RAID 0 array using all of the same type drives.  Earlier I noted that 55 gig would be the sweet spot for the above drive.  If this were three 300gig drives, it should say 839 gig. Remove it and put 165. Since it is RAID 0, it will use 55 gig of each drive.  Save the settings and confirm.  Now start installing Windows7 or whatever your favorable flavor is, and enjoy your new found speed!

How to setup RAID video

To help continue my spreadsheet, please send your HD TACH submissions to:

I will determine the sweet spot for you and enter it in this spreadsheet for future viewing.  Or if you would like to submit it on the forum, there is an ongoing thread about this here. Thank you for your help. 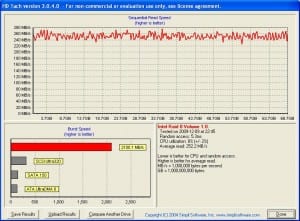