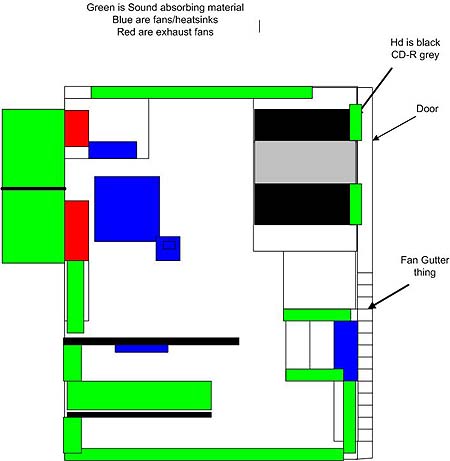 When my old Pentium 3 500 Mhz with a TNT2 graphics card couldn’t handle most new games anymore, I decided to buy a new computer.

Not having enough money to buy a Dell which I had before, I wanted to just get a new motherboard, CPU and a graphics card (first of all).
So I bought an MSI motherboard, an Athlon XP 1900+, DDR Ram and a Geforce 2.
Never having built a computer before and not having much know-how, I realised I needed another case and PSU cause Dell doesn’t use the ATX standard.

So I bought a very cheap case with a PSU. After installing everything, I was very surprised because

Well after some more upgrades and a new case, my computer was complete. Having spent a lot of money (my first year’s student loan, which I did not need because I lived at home) I had this PC:

Now the noise has become unbearable and I wanted to do something about it. Most of the things I purchased, I bought over a period of time, but for this article I will just pretend I got them all at once:

Now I have all my parts, which cost quite a lot – roughly $200. Now don’t stop reading this article yet! I will promise you after this, your PC will much quieter then before.

First, I put my hard drives into the Silent Drive Enclosures. Please note since they are enclosed temperatures will increase, but the enclosures do have some cooling effect. Please see the website as linked above. I then tested how hot my hard drives have become.

I run the SiSoftware Sandra hard drive benchmark burn in wizard for 40 minutes. Results = 50C, which is acceptable. To monitor the hard Drives’ temperature, I used Speedfan, which has S.M.A.R.T reading capability which can read the on board temperature sensor on the Hard Drive. You might also want to try this IBM Feature Tool to make your hard drives run silently. The tool should work on all newer hard drives.
{mospagebreak}

I also installed the PSU and the Geforce 4 cooler, which was very straightforward.

I then took out all the fans which came with the case, which are rated at 22 dBA, and replaced them with 21 dBA ones. This sounds stupid, but I could not find a fan speed controller for 4 pin case fans and that’s the only reason why I bought new fans. The 3 pin fans allow me to use the Fan Mate speed controller.

You might have noticed that my case has 3 intake fans – two at the front, one at the side and 2 fans blowing out. I have never used more then 1 intake fan and 1 exhaust at the back because I hardly noticed any temperature difference. The rear fan runs at 100% speed and the front one roughly at 70%, which I can hardly hear.

I then installed the acoustic material. In the guide, they put this stuff in before installing anything in the case, but I did it the other way around, which I would recommend.

I obviously covered all the main areas (side of case and top and bottom) and some other areas:

As you can see in my picture (unfortunately I don’t have a digital camera or scanner), I placed some of the material on the inside side of the Hard Drive cage where the fan is located. I did not obstruct airflow, but I covered all the metal areas so the sound can not easily escape the case.

I also covered the bottom front and rear fan holes which I do not use and all the bare areas on the front and back of the case.

I also placed some sound absorbing foam on top of my sound card. The foam is fire proof, non conductive and the sound card is cold. I found that this made quite a difference, since the sound of the Geforce 4 fan was muffled by the foam.

I also stuffed some foam in front of the hard drive enclosures – not that this made any difference I could hear.

I also built a little foam box which I placed at the back of the case, which does not cover the exhaust fans of the case and the PSU (never cover fan holes), but encloses it from all sides. The box is only 7 inches long, but it made a massive difference in sound output, since the sounds could not spread out and was muffled by the foam. I would not make the box any longer, otherwise the airflow will be too restricted.

The computer sounds pretty much like my old Pentium 3 now. When I walk around in the carpeted room 3 feet away from the computer, I can hardly hear it. When sitting next to it (it’s underneath my table to the left of me), it makes a nice, low, humming sound, which is far better then a high pitched one.

The whole computer is near whisper quiet and I can easily fall asleep next to it. Not completely silent, but a great achievement for running the set up below:

You will all be interested in the temps, so here you go (under load):

No crashes, system always on for over 16 hours, running [email protected] over night.

¹This has to do with the motherboard, ABIT put the sensor quote “next to a warm thing” and the readings are inaccurate. E-mail ABIT if you don’t believe me.

Today is the fourth anniversary of 911. Ironically, it’s a good time to look at a more recent disaster. Katrina shows us the benefits and limitations of modern technology. Computers let us communicate in ways unimaginable even fifteen-twenty years ago. Read More

There’s been a lot of confusion as to when AMD plans to get 1) K8L processors out and 2) when quadcores will show up. AMD’s conference call a few days ago cleared much of this up. The first K8L processor Read More

I spoke yesterday about AMD possibly being an early casualty of the “less is more” phenomenon. That would be good for Intel, for a while. Not long. The Techranasaurus Looking further down the road, it’s hard to see how the Read More