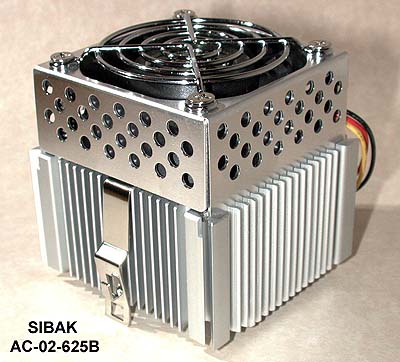 The good guys at SIBAK were nice enough to send a sample of their copper core heatsink, the SIBAK AC-02-625B. It features a copper core about 19mm in diameter surrounded by aluminum fins radiating out from the core.

Looking down into in after removing the fan 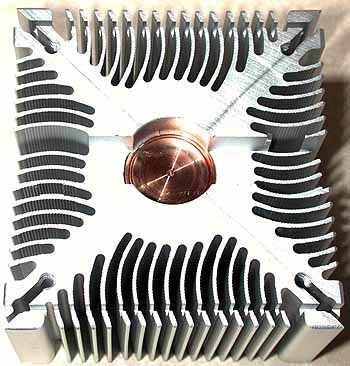 clearly shows the radial fin pattern. There is a large center groove for the clip and two smaller channels at each end – two sides of the skirt surrounding the fan ride in these. The core is about 32mm high. 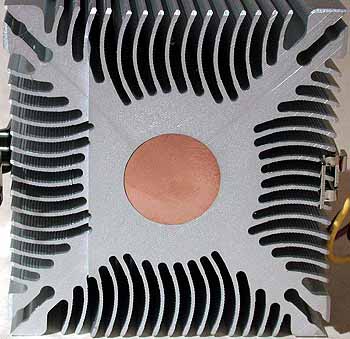 is flat and fairly smooth – you can see some light machining marks but they are not apparent to the touch. The core is flush with the surrounding aluminum base – this is important because the CPU contacts both the copper core and the aluminum base.

The clip requires a screwdriver or nutdriver to mount The rear clip requires a little dexterity in engaging the lug – it’s offset by about 3mm, so it’s under the heatsink’s base a tad. The front clip is no problem. The cutouts are deep and easily engaged.

In summary, a fairly conventional copper cored heatsink with a good clip.

The SIBAK AC-02-625B was first tested on the CPU Die Simulator which gives results that are unaffected by motherboard influences. I then tested it on an Iwill KK266+ and Shuttle AK31, modified to read AMD’s on-die diode, as an example of what users might see on their systems.

Die Simulator results place the Sibak, with its noisy Delta 38 clone, in the top rank of heatsinks tested to date (Heatsink Ranking).

Sibak, a new face on the heatsink scene, delivers a very promising entry, although with noise at the Delta 38 level.

Thanks again to Sibak for sending this our way. Sibak is looking for distribution – contact details:

¹Manufacturers measure fan noise at something like 3 feet away, so this is not a comparable measure.

HOW-TO BY ODD ONE - Building a cooling system controller