SUMMARY: Three fans, on the noisy side, but an interesting and very good performing design. 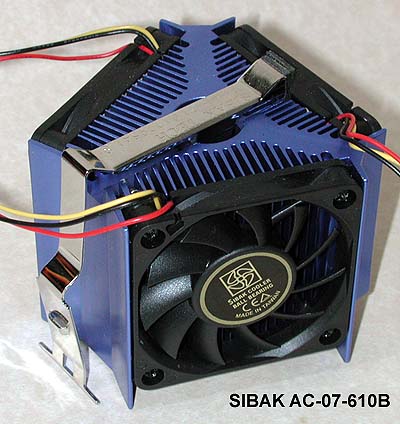 The good guys at SIBAK were nice enough to send a sample of their latest copper cored heatsink, the SIBAK AC-07-610B (This is the model # on the box – the unit on their website is different). This is a Socket A/370 heatsink with a 19mm copper core surrounded by aluminum fins in a triangular pattern, cooled by three fans. 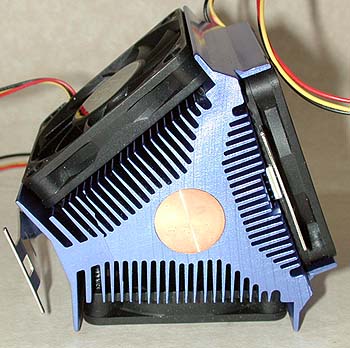 The fans are a Everflow Model #R126010DU – a 60 x 15mm unit I measured spinning @ 5700 rpm. I found them to be on the noisy side – I measured their noise at 67 dBA with a Radio Shack sound meter 8″ above the heatsink, slightly less than a Delta 38 (about 69 dBA – although the fans are not as high pitched as the Delta). It’s also safe to use a motherboard fan header for each fan (4.2 watts each) – one comes with a four pin adapter, so you only need two motherboard headers.

Airflow through the fins is quite good – there’s a lot of warm air coming off the top of the heatsink. The clip is a good one; it is fairly stiff and engages all three socket lugs, although it does take a screwdriver to mount it on the socket.

However, I did find it difficult to mount on the Iwill KK266+; there is a bank of capacitors on one side of the socket and I could not engage the rear socket lugs, as the fan interfered. The solution was to unscrew the fan, mount the heatsink and then reinstall the fan. I could do this easily enough with the motherboard outside the case – in a case, this would be more difficult.

In summary, an interesting copper core/aluminum extrusion heatsink with a secure clip.

The SIBAK was first tested on the CPU Die Simulator which gives results that are unaffected by motherboard influences. I then tested it on an Iwill KK266+, modified to read AMD’s on-die diode, as an example of what users might see on their systems. Just to see what happens, I also ran a test with only two fans running.

Die Simulator results place the SIBAK in the upper rank of heatsinks tested to date (Heatsink Ranking). The motherboard tests show that even with two fans, the SIBAK will do OK.

Performance is quite good, although on the noisy side with all three fans running; if nothing else, an interesting looking heatsink. If you’re at all concerned with safety, this three fan heatsink will appeal to you.

Plumbing Tips and Such - How I Do It

A 1U, all copper heatsink — Joe
Read More