The kind folks at SIBAK were nice enough to send a sample of their latest product, the Sibak CPU Water Cooler. This is a complete system which includes waterblock, pump/reservoir, radiator and tubing.

The waterblock is well finished and kind of cute (my wife’s comment). The clip is engages all three socket lugs and does not require a screwdriver to mount. Note the color coding – each connector in the system is color coded; by matching the dots, hooking up the system is fool-proof. The base 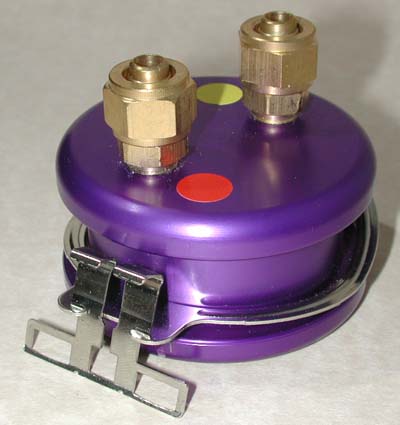 is composed of a copper core embedded in an aluminum base. The copper plug is well finished although not highly polished. 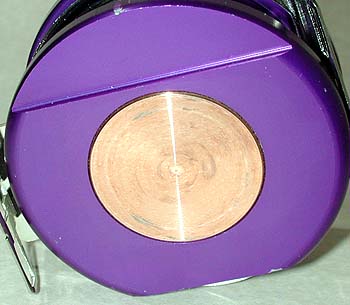 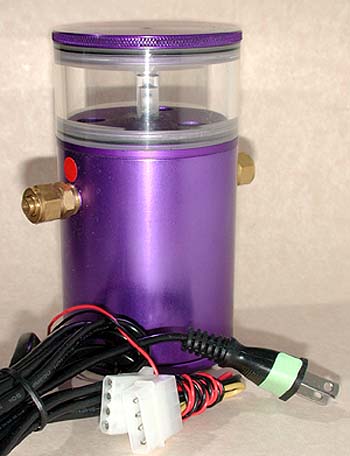 The pump (110 volt) is incorporated into a reservoir that looks like a cocktail shaker. It is mounted on rubber feet so it runs quietly. The top unscrews (with some difficulty) for filling and is made watertight by rubber O-rings. There is also a 12 volt connector for a blue LED (the center post) – very nice touch.

The one problem I found was that with the top screwed down tight, water seeped from the joint between the plexiglass top and the reservoir when the pump was powered up. Loosening the top stopped the leak. There apparently is a pressure buildup under power which forces water through the joint.

One possible fix is to drill a very small hole in the top as a vent. I ran the system with the top loosely fitted and had no leakage. 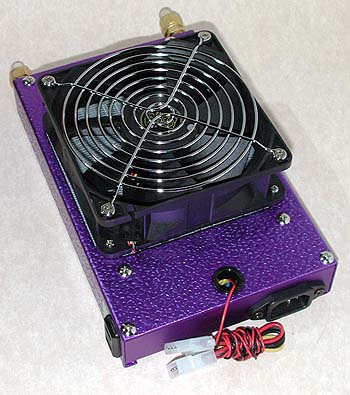 Included in the fan assembly is a power plug and a plug for the water pump. This plug is activated by a relay so that the water pump only gets power when the 12 volt line is powered up – a nice touch. 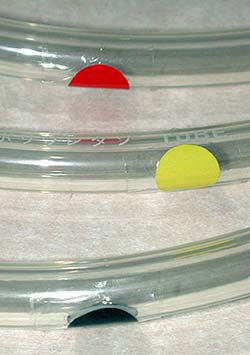 Tubing (3 pieces about 2 feet long, 3/8 inch OD) is color coded so that connecting the system is literally a “connect-the-dots” experience. Tubes are held in place with nuts and require a wrench to tighten fully. Note that as you tighten, the tubing will rotate, so plan ahead for it.

The Sibak CPU Water Cooler was first tested on the CPU Die Simulator which gives results that are unaffected by motherboard influences. I then tested it on a Shuttle AK31, modified to read AMD’s on-die diode, as an example of what users might see on their systems.

The Sibak CPU Water Cooler is nicely packaged, but noisy. Mounting the kit internally will require significant case mods, especially for the radiator assembly. There are no provisions for anchor points on the reservoir/waterpump.

Users are cautioned that the design tested requires a reservoir vent.