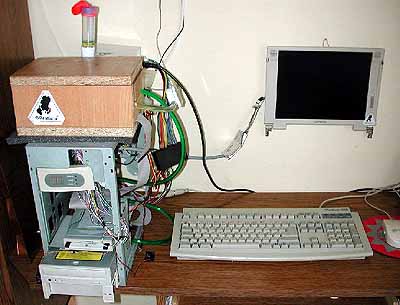 The detailed description of my former cooling is present is HERE. I have received many replies, but at least 90% of them were curious about my LCD display know-how.

This new implementation of the former cooling lasted a little bit longer than the previous one. I have been planning it for 2 weeks and I have been working on it for 3 nights and days.

Because my little daughter (she is one year old) pays little respect to precious things, I had to make a near baby-proof system. I have to compact the pieces because the long tubing had stimulated the fantasy of her.

The major new change is to assemble the pump, the relay, the cross-tank and Power Supply (PS) together. I have totally changed the processor, the HD and the main oil cooler. I have applied synthetic resin rather than silicone glue.

I have also changed the brass into copper at the processor, HD and main oil cooler. Only the basic plate of the main oil cooler and the housing of the PS is made of brass. Inside of the copper houses there are fins giving a large surface area that provides the appropriate heat exchange. All of the components were fixed with soldering tin (I am describing here only the differences from the previous cooling). 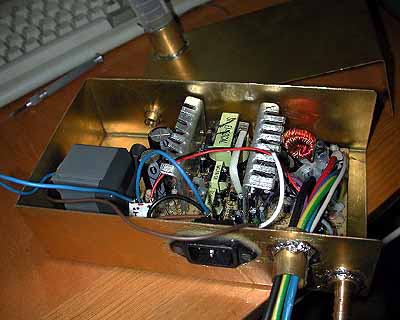 For the Power Supply, I had to elongate the lead wires by 30cm in order to reach the connectors. I have applied a short copper tube with the wires filled with synthetic resin through the wall of the PS. I had to isolate the endings of the wires because they worked as a capillary and they were leaky INSIDE! (between the copper wire and the plastic coat inside of the wire). This PS must be on the highest point of the whole system, because of the cross-tank. 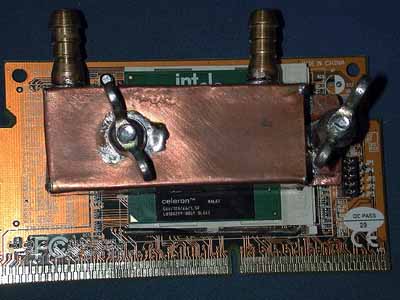 The CPU cooler is a 3mm thick copper plate as a basic, copper box, fins inside and two modified bolts as fittings. The outleading stubs are milled from brass. 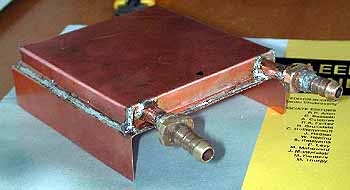 The HD cooler is very similar to the previous one: U-shaped copper plate, a copper box, fins inside and two outleading stubs fit with the original screws. I have also applied silicone paste. 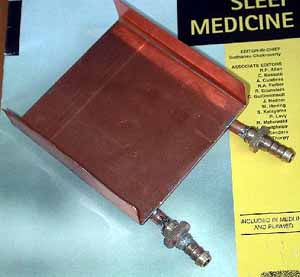 For the main oil cooler, the resistance of the previous cooler was too high; therefore, I followed the method of the other coolers, so there is a 30×30 brass plate as basic and a 0.5cm high box upon it with inside fins, etc. 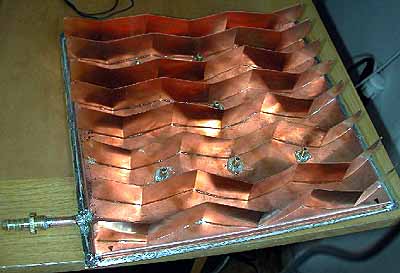 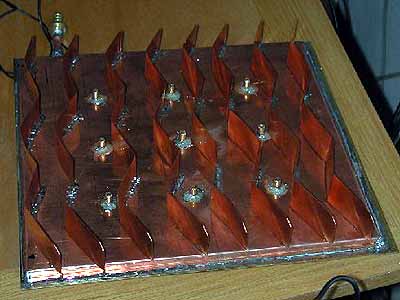 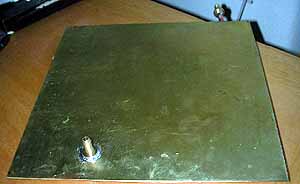 The outleading stubs are in the perfect position for the tubes coming from the PS and going to the CPU. 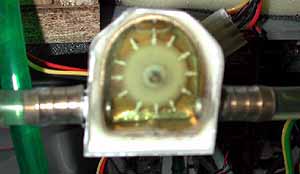 The flow indicator is a 100 percent self-made thing – a rubbish brass housing, the body of the wheel made from a tape recorder spindle, the arms (cogs?) are from rubbish telephone card and the window made of plexiglass.

After six hours of torturous video, the values were (ambient temp: 27.5 C):

If CPU Idle was set on and only WinAmp was working, results changed to 38/42/40/41 C after the same time. It proves that the PS is the main source of heat and the duty cycle of the processor has little influence on it. It also indicates the thermal balance point of the system should be about 40-41 C at an ambient temp of about 28 C.