This cooling is the result of a short development (about one month). I have seen Bari’s Power supply cooling with transformer oil on the Hungarian cool-it pages (BARI HAS ALL THE GLORY!) and this idea inspired me thinking about my version of cooling.

The aim of the project was to prepare a computer with no noise, because we have to sleep in the same room where the computer is. We also have a newborn baby, and I want to let her sleep, too. Our greatest enemy is the noise. Is this noise absolutely necessary? No, it is only a by-product of spinning HDD and working fans that eliminate the heat from heat-producing components, avoiding them from fatal overheating.

What are the sources of noise?

First the fan(s) of Power Supply (PS). You can decrease the voltage of them, but if you did so, you also reduce the heat dissipation.
Then the fan of CPU. Since the CPU is very sensitive to overheating, it seems to be a wrong idea to reduce its voltage. Some mainboards can control the fan rpm; this method is worse, making you nervous because you are not used to the variable frequency of noise.

The HDD is a strong source of noise. It also has a wide frequency range of noise.

The newest CD-ROMs (usually over 40x) have the normal working noise of a tornado. I could not to do anything with it, fortunately its not on all the time. All you can do (besides working without it:) is use an older model (8x or below) or use a hypothetic slowing program (does this exist?).

Finally the noise of the pump – it has a negligible 50Hz noise.

One of the possible solutions is the water-cooling. It works fine, but you would have difficulties cooling all of the important components, mainly inside the PS. Usually water cooling is effective at overclocking when you need to cool only the CPU, but it has some undesirable features (eg. water is a conductive agent, so a little drop of water is enough to turn your mainboard or CPU into a useless pile of metal; water is a medium for living organisms like brown sea-weed; it can cause rust, evaporates, etc).

In spite of the bright advantages (and disadvantages) of water I decided using precision instrument oil. It is a thin, yellowish liquid with low viscosity (eg. the viscosity of transformer-oil is already the double). I could not measure any conductance even at uA range with my equipment. Since the PS is under oil, and Bari reported problems with swollen gaskets of electrolytic capacitors, I needed to isolate the components from the oil.

I applied liquid plexiglass (plexiglass pieces dissolved in chloroformium, consistency like yoghurt) onto the board of my PS. After drying, it formed a thin film of plexiglass on both surfaces. Perhaps it protects the capacitors and other components from oil.
I made a metal box of brass, by means of soldering, maintaining the original dimensions. As you can see, the main tubes are soldered, the lead wires are deeply covered in silicone rubber and the mains are fastened with two-component synthetic resin.

Since the metal box must be hermetic, I checked it for leakage with water first (without top and PS board). On the top of the box is a de-aerating [bleed] screw. The outgoing stubs made of lathed brass, the inside tubes made of copper (outer diameter is 8mm). I used two extra wires for the main switch, but oops! I forgot the fuse! If that fuse goes wrong, I will have to re-assemble my PS :(( 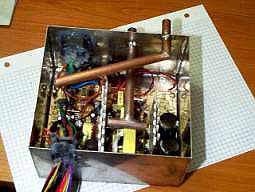 See the inside of Bari’s masterpiece, my PS is very similar!

I needed an industry-miller to make the CPU cooler. I milled the 5x5x1cm solid brass cube in zigzag-shape, as the way of oil (see drawing). I soldered a brass plate on the top and two stubs to the ends. See the picture for results. I fastened it on the processor with a modified clip which came with the air-cooled heatsink. I applied some metal-oxide (non-silicon) thermal grease under the CPU-cooler. 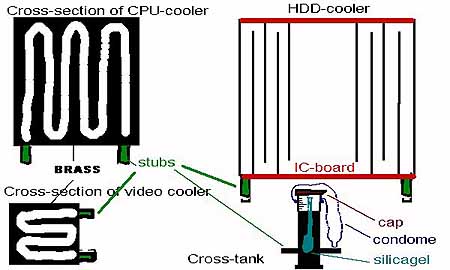 The video card cooler is very similar to the cpu cooler, it was made of a 3x3x1 solid brass, and the way of the oil is M-shaped.

Assembling HDD cooler, I used an original cooling flange made of aluminium. I made a box-like thing, the two end-sides were made of rubbish IC-boards, and the transparent top was made of a CD-case. I used two-component synthetic resin as glue. The stubs were made of copper tubing. I fastened the HDD-cooler on the metal top of HDD (the opposite side of IC-board) with rubber ribbons and applied some thermal grease while avoiding to cover the breathing hole of HDD. 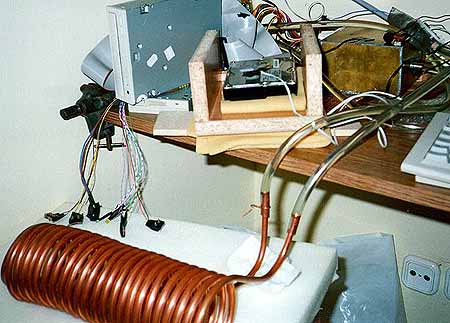 Reducing the terrible noise of my Quantum HDD, I placed the HDD into a wooden box among cloths, sponges and metal-folies with its cooler together (or heat-exchanger). As you know, the metal is useful to filter high frequency noise and the wood & sponge for the lower frequencies. 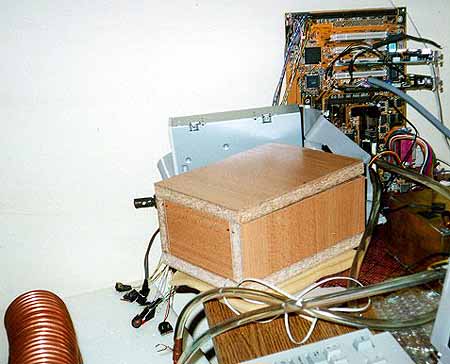 The main oil-cooler was made of 6m copper tubing, wound around another tube in the form of a spring, with 30cm in length and 10cm in diameter. One can immerse it in (icy) water, but I tested it only in room-air. 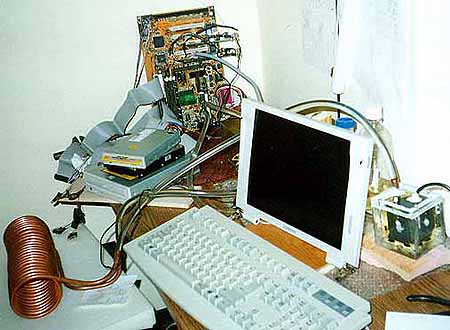 First, you have to fill your system tubes with oil and you also have to be able to empty them. Meanwhile, you need to eliminate the bubbles so it serves also as a bubble-trap. The system is closed, so you need to reserve space for thermal expansion (my 3 liter oil expands from 30 C to 43 C about 30ml). Since my PS is under oil, I had to de-water the oil (a minimal amount of water can be solved in oil) in this tank with a fine net (from an infusion-tool), containing fried silicagel and some piece of fried (dried, de-watered) cobalt-chloride crystal (it changes its color from blue toward pink when water occurs).

If you want to maintain the good features of your oil, you have to exclude the presence of air as much as possible. I applied a condome around the cap of my cross-tank so the oil does not contact the fresh air, only with the air under the cap and the condome (C&C tool :).

I made this ‘cross tank’ from a thicker, nickelized brass tube (go, plumbers, go!:) soldered with two stubs and a calibrated plastic labour tube above with a hermetic cap. I needed to open this cap for the thermal expansion of the oil – the condome serves as an air-reservoir (cheap and simple!:).

The pump is a simple aquarium (room-fountain) pump (180l/h, 5W) under oil in a transparent box made of 1cm thick plexiglass, cooled by oil. The dimensions are: 8×8.5×8.5 cm. The ‘glue’ was chloroformium, the only solvent I know which can dissolve plexiglass. The top of the box is isolated with silicone rubber, the other compounds are fixed with synthetic resin. 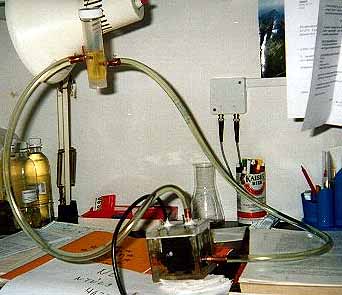 The pump works on 230V, so I used a miniature relay driven by 12V (the lead wires of former PS fan). This makes the pump work only when the computer also works. I needed this because the pump is so quiet I often forgot unplug it for days. The pump itself has a noise at 50Hz; you can minimize that placing a soft sponge under the pump so it does not contact directly to anything.

The way of the oil:

Up to now, my computer has no case at all (I ran out of money and I would like to carve one from wood) so I tested it exposed to air. The ambient temperature in my room was 30 C. My motherboard can measure the temp of the CPU and has an auxiliary thermal probe which I placed on top of the metal PS box to measure the maximum temp of oil. After 6 hours:

Temps depend on the ambient temperature – at an air-conditioned 25 C:

If you use green functions: ATX PS alone heats the oil up to 34 C in STANDBY mode inside of its box during the night.

The parts of my system are:

COSTS: the total cost was under $80

DISCLAIMER: I bear no responsibility for any direct or indirect damage of your system, data, state of your mind, explosion of your house or impotency of your godfather :)) If you even loose a screw without authority, you will lose the warranty of any component of your computer – seriously!

I am open to discuss the details – please send all your comments, questions, suggestions to
Bodosi Balazs.

Hi everybody! I’d like to share some overclocking experiences of mine with you. It all started out when I just got bored of my PII-450 running quietly along at 504, as my P2B-S doesn’t allow higher clockspeeds. I just wanted

The Monster That Overclockers.com’s Forum Built