SUMMARY: Very good low noise heatsink, although clearance may be a problem on some mobos.

More and more people are cooling their PC’s with water, but what if you are reluctant to take the plunge and still want top cooling performance? Silenx has created a new heatsink that should give you top performance without going to water. Please note that this heatsink has NOT been released to the public yet and as such may have some problems that the final retail units do not. Anyway on to the review! 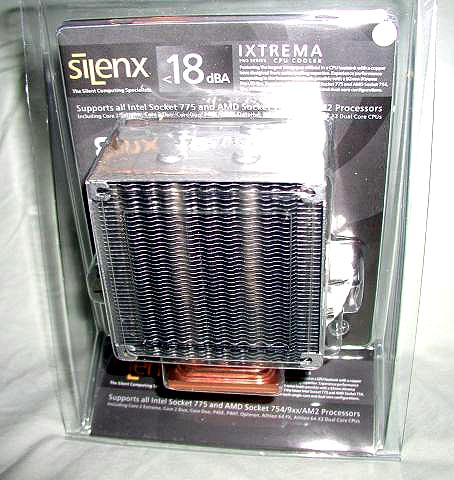 Here is the unit in its stock packaging. As you can see it is a large tower heatsink with a copper base and aluminium fins. If you look closely, you can see two of the four monster heat pipes that transfer the heat from the copper base to the fins. You can also notice the aluminium fan shroud and mounting for a 92 mm fan. It’s compatible with socket 775, 754, 9xx, and AM2. You can also see the claimed rating for less than 18 db of noise. 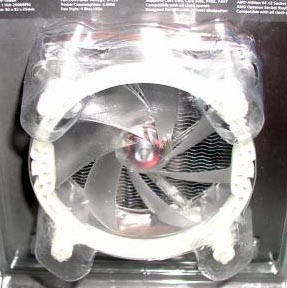 The included fan has long, sweeping blades that are evident on all Silenx fans. You can also see the specific specs of the heatsink at the top of the packaging. 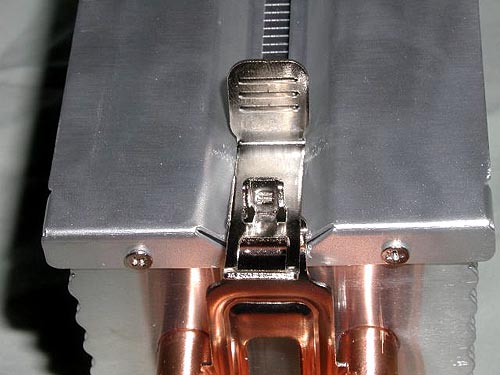 Here you can see the mounting clip that allows the heatsink to be mounted on the 754,
9xx, and AM2 platforms. You can also see the sheer size of the four heat pipes. 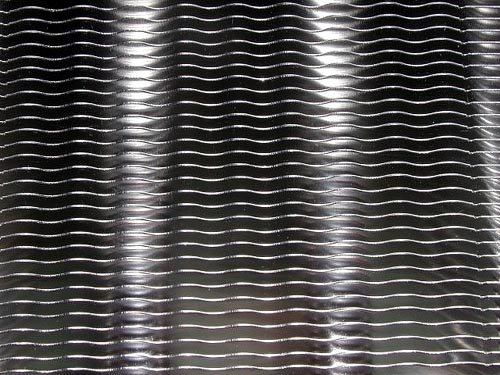 The heatsink fins have an interesting set of curves on the front – my guess is that this is to increase surface area. 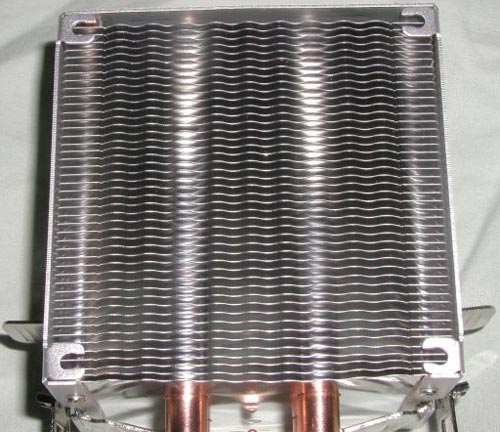 Again notice the 92 mm fan mounts. FYI there are mounts located on both ends so you can run the heatsink with a pair of 92 mm fans in a push-pull configuration. 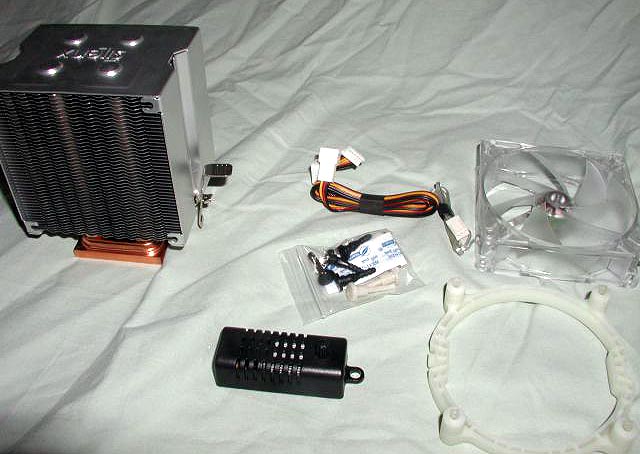 Here is a shot of what you get with the heatsink. The package includes the heatsink, a 92 mm blue LED fan, a fan controller, fan controller/motherboard splitter cable, four silicone fan mounts, TIM and LGA 775 mounting hardware. 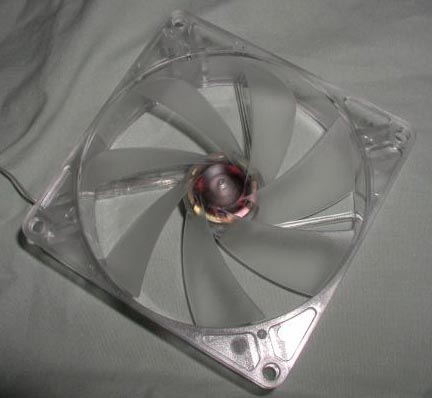 Close up of the fan. 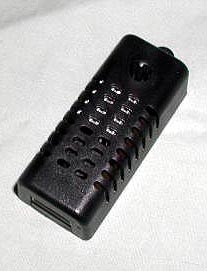 Close up of the fan controller. Note that this is a very dated design and is similar to Zalman’s Fanmate 2. I would have liked to see a 3½” or 5¼” bay controller or even a PCI slot mounted controller. 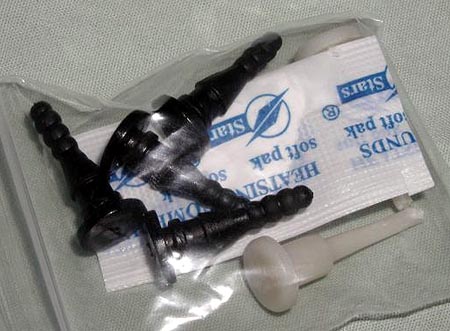 Here are the included fan mounts, TIM, and pins for the 775 mount. I would have liked to see some high quality TIM included; some AS5 or ASC would have been nice instead of the generic white compound. 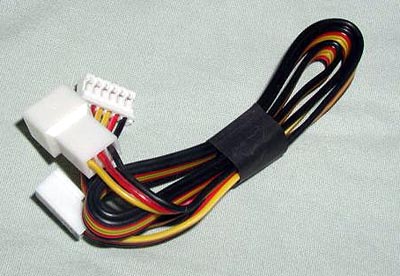 This is the included cable that allows you to connect the fan to the controller and a 3-pin fan connector on your motherboard at the same time. 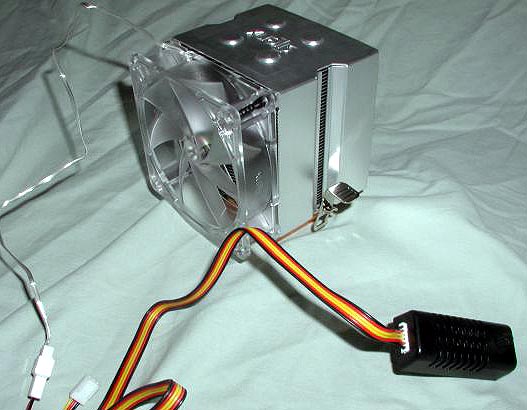 The unit all set up. 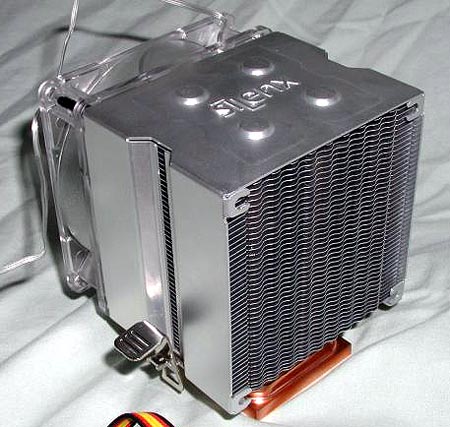 And a back shot. 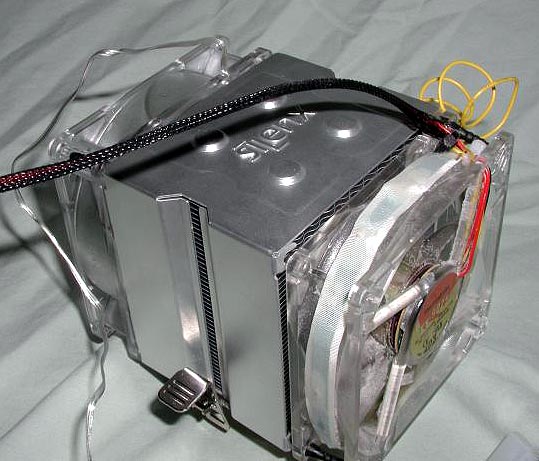 If anyone was wondering what this looked like with two fans, here you go. 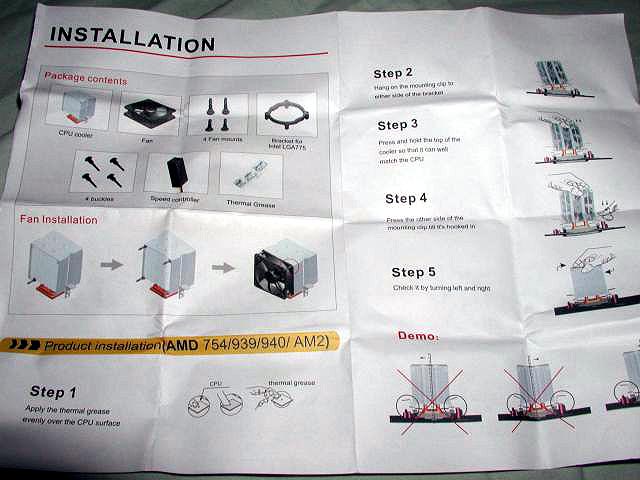 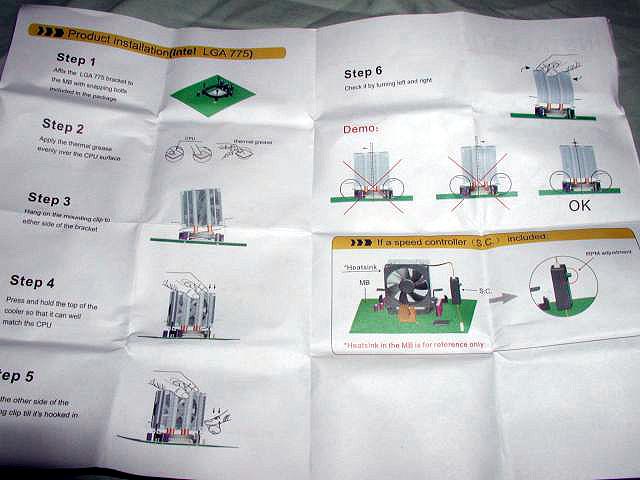 And last but not least, a couple of shots of the instruction sheet. 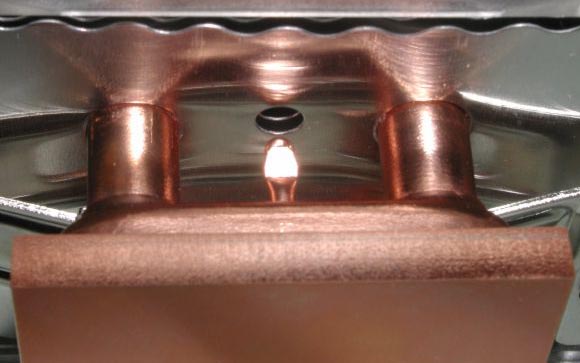 This is something interesting that I noticed about this heatsink – as you can see, there is a raised portion of the copper base with this knob on it. It appears that this knob is the means by which gas is injected into the heat pipes and the chamber on the base, a very interesting design.

I would also like to mention something about the CPU clip in the picture. This clip is permanently attached to the heatsink and cannot be rotated. This will cause some problems, as you will see later in the review. 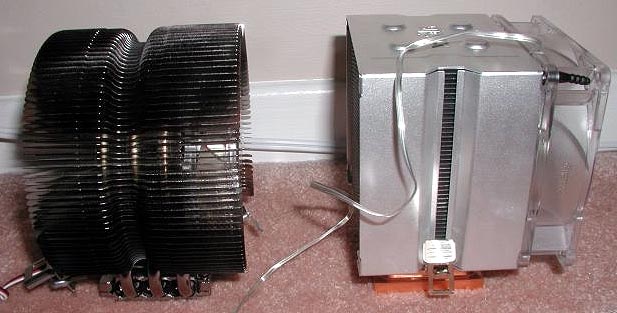 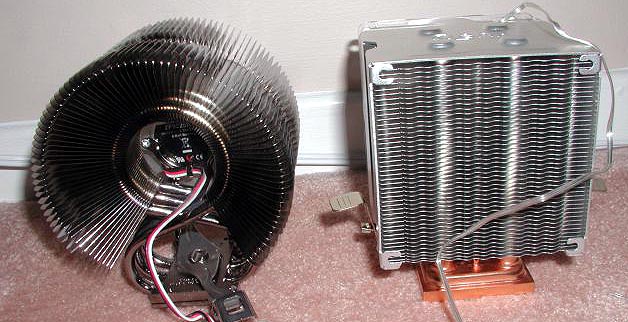 I will be comparing the performance of the Silenx heatsink to the Zalman CNPS 9500 AM2, one of the better AM2 heatsinks that money can buy. As such I have included some comparative photos. 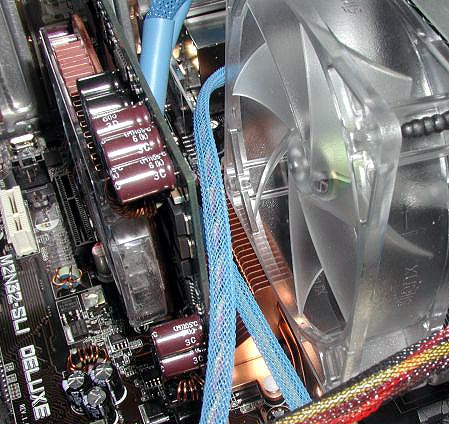 Now it is time to install the cooler, and it is here that I ran into problems. As you can see, the M2N32-SLI Deluxe’s chipset cooler is bumping into the fan and keeping the heatsink from seating properly. 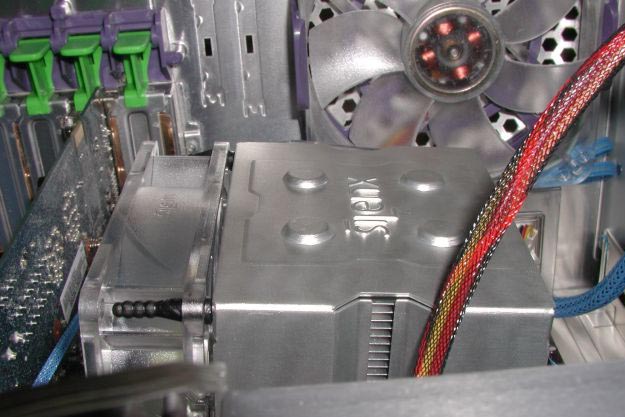 You can see the problem here – the heatsink and drive bay should be parallel, but alas, this is not the case. 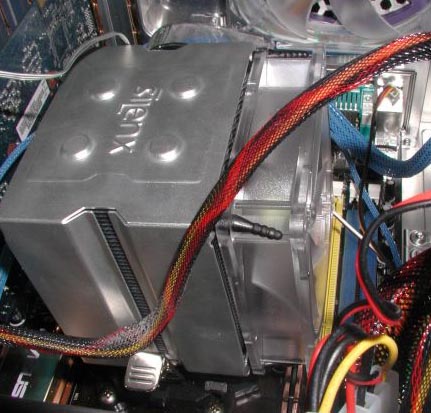 Same problem in the other direction, this time the heatsink is interfering with the RAM. 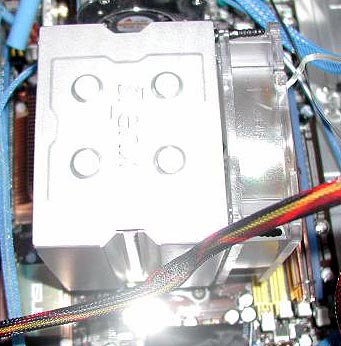 Luckily I could move the single RAM module to another channel and the heatsink would fit. 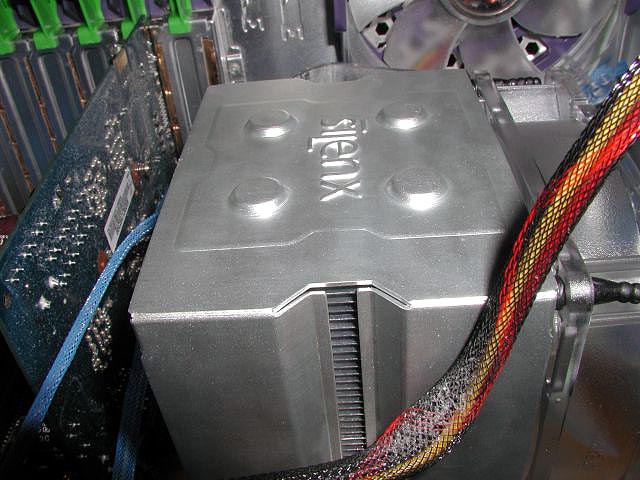 As you can see in this shot the heatsink is now perpendicular to the video card – perfect! 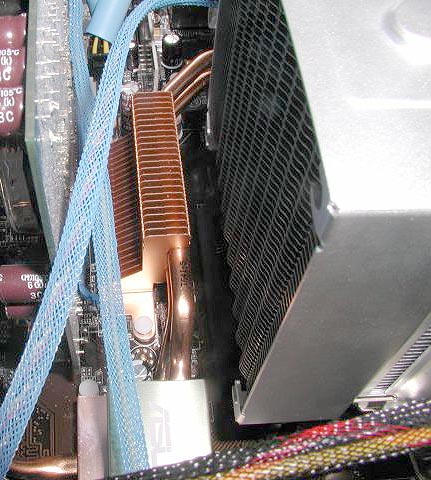 Here you can see how close the heatsink is to the motherboard cooling solution; although a very thin fan may fit, I did not have one lying around so I will be limited to testing a single-fan configuration. 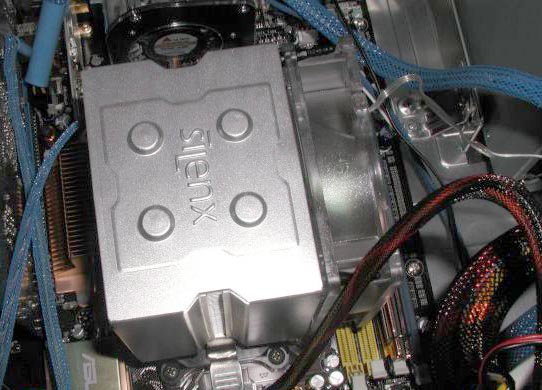 This bad-boy installed! Note that the fan is blowing upwards, pulling air through the motherboard heatsink. This layout can be attributed with reduction in motherboard temperatures. 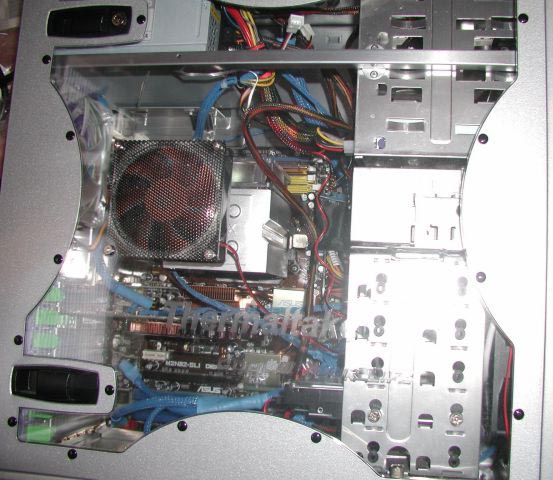 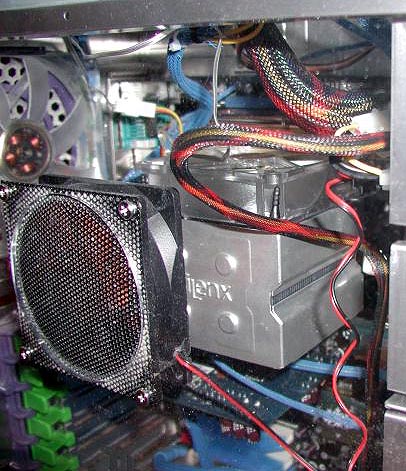 Looks pretty good in there! 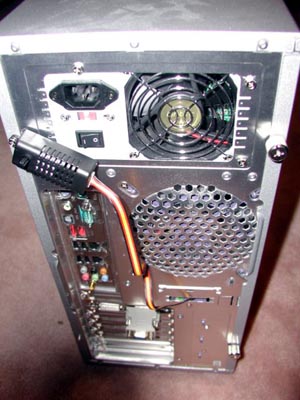 I mounted the controller to one of the right side panel screws. 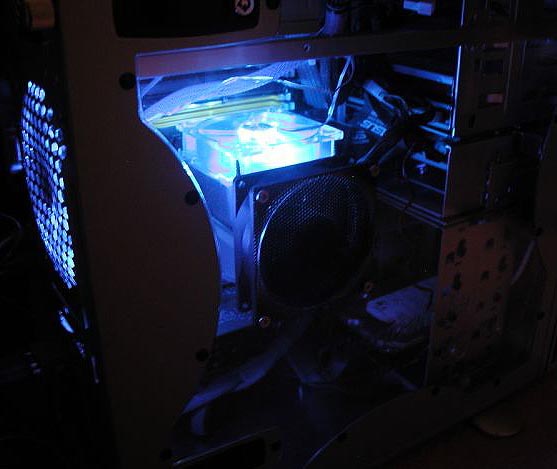 A shot of the system up and running.

A very impressive showing on Silenx’s part! This heatsink beats the Zalman by 4 degrees at load and 5 at idle. This is nothing to scoff at, as the Zalman is one of the better heatsinks on the market. Also note that the Silenx heatsink, like the Zalman, was very silent while doing this.

This new heatsink from Silenx is a great performer – it looks great, comes with a fan controller, doesn’t weigh a ton at 500 grams, the fan is quiet even at its highest setting and it’s universally installable on most current platforms.

On the negative side, it interfered with the M2N32-SLI Deluxe’s motherboard cooler, and the alternative installation left me with two usable RAM slots. I would really like to see a clip that can be rotated, so that if one has a motherboard with a strange layout you can rotate the CPU cooler to fit. Also even though a fan controller is included, it is a very dated design and should be replaced.

And another very minor note – the heatsink only comes with four fan mounts and you will need eight to mount two fans, but if your second fan is going to be from Silenx, then it comes with a set anyway. So to sum it all up:

I think Silenx has an excellent heatsink, although I think it needs a little work before it is released. When it is released, check to see if you can rotate the clip before purchasing if you have a board like I do. Other than that, the controller issue is pretty minor and overall if you have a board with a conventional CPU and RAM layout, you will not regret buying this heatsink.