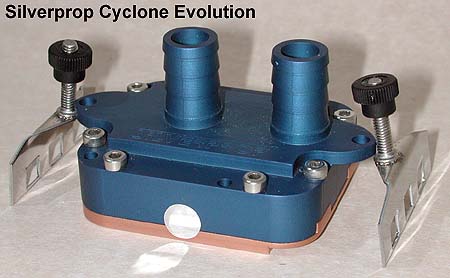 Silverprop was nice enough to send a Cyclone Evolution waterblock to test.

If you look closely, you’ll note that there are more, but thinner, fins for the 2.5 than the 2.0, with the thickest for the Cyclone. However, if you measure the gaps between the fins of the 2.0 and 2.5, you find that the channel width is the same on each block; ergo, there is less space for water flow in the 2.0 (15 channels) compared to the 2.5 (18 channels). 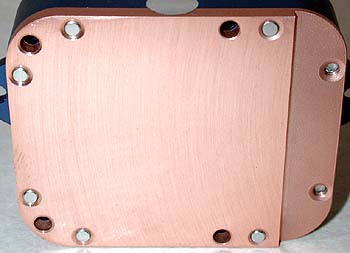 Test Results indicate that the Cyclone Evolution’s pressure drop (or head loss) across the waterblock is moderate; flow resistance such as this means that Silverprop’s Cyclone Evolutions should function OK without using a very large waterpump, although anything less than 300 gph might compromise results, depending upon how restrictive other components are in system.

As with many waterblocks, I found that reducing flow to 0.5 gpm resulted in more of a performance decrease (about 1ºC) than the gain by increasing flow to 1.5 gpm (about 0.5ºC).

Silverprop’s Cyclone Evolution Waterblock is a good choice for CPU cooling. Flow resistance is a tad on the high side, although the Cyclone Evolution will perform very well with moderate power waterpumps (300 gph), as long as other components do not unduly restrict waterflow.

People talk about noisy heatsink fans and what they did about them. — Ed