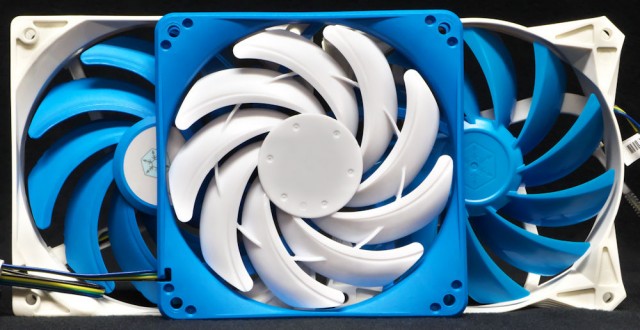 From 2003, Silverstone has made and sold a variety of devices. They say this about themselves:

Silverstone lists the FQ121 features as:

The Silverstone FQ121 fan comes in a transparent clamshell secured by two pieces of tape. Through the case you can read all the print, including a table of specifications. They even give you the email address for customer support. How cool is that?

The FQ121 accessories include a PWM-style Molex adapter. Through this, the fan can get 12 volts directly from the PSU. Also included are four standard fans screws.

Here we can see the FQ121 intake and exhaust faces side by side. The blade of the FQ121 are highly curved with trailing edge notches to change the nature of the sound which inevitably emerges from fast moving blades.

Preliminary Results from the Silverstone FQ121 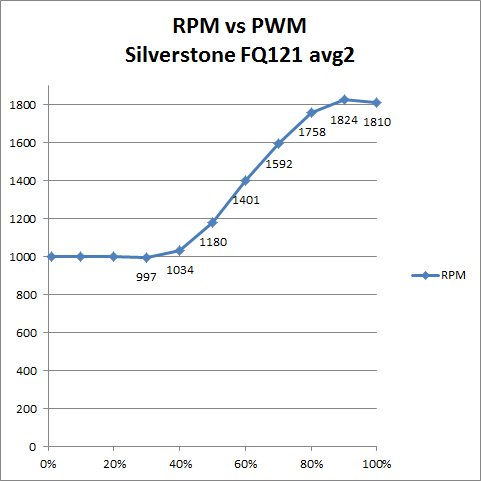 Silverstone lists the FQ122 features as:

The Silverstone FQ122 fan also comes in a transparent clamshell secured by two pieces of tape. You get to read all about the fan, including its specifications. Just like the other FQ fan, you get Silverstone’s support email address.

Silverstone’s FQ122 comes with a few more accessories. For one thing, you get a Speed Reducing (SR) cable. Each fan comes with a quartet of double ended fan fasteners and vibration isolators. There are also four standard fan screws. You get a PWM-style Molex adapter and at the bottom you get a four-way pad that can further dampen vibrations.

This picture leads off with the exhaust face of the FQ121. On the intake side we have the plug sticking through the fan blades, showing us it is indeed a PWM fan.

Preliminary Results from the Silverstone FQ122

The FQ122’s speed runs from about 800 RPM to about 1550 RPM. When you attach an SR cable to the it, the speed drops to a little more than half of the 12v RPM. The fan runs about half from 400 RPM to not quite 900 RPM. It may be a slower fan, but it still responds to PWM control. Very interesting. 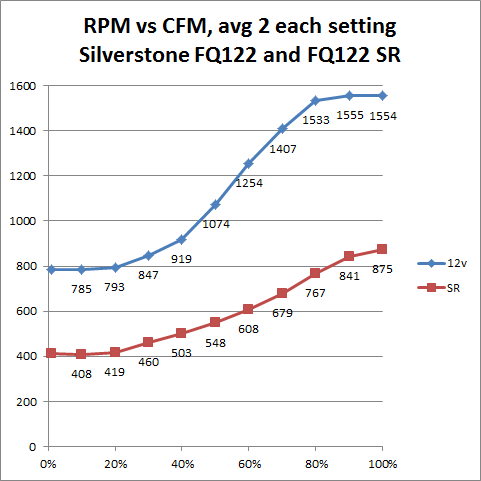 Silverstone lists the FW121 features as:

The FW121, being a recent Silverstone fan, comes in a clear plastic clamshell sealed with tape. Through the plastic you can read the features. On the back we find a table of specifications. Inside, you will find the fan and its accessories. It has four double ended vibration isolators as well as four fan screws. The Molex adapter is set up here so you can see the PWM-style socket and its two electrical leads.

For this pic we have the intake and exhaust sides facing each other. You can see that these are thin fans. There is a downstream ring that holds the blades together on the impeller. The ring corresponds to a ring on the exhaust side of the frame. The struts are curved to improve airflow.

Preliminary Results from the Silverstone FW121 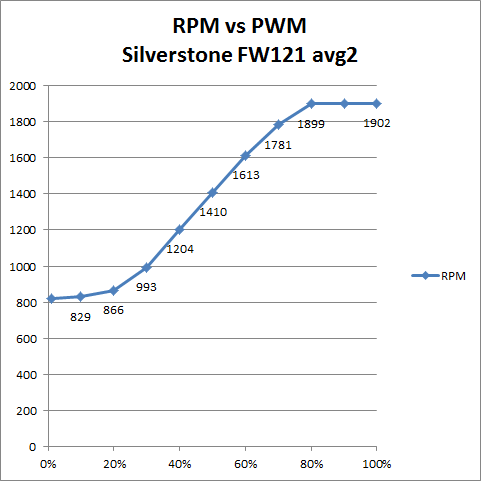 120 mm fans can be used in three main scenarios. First, they can be used to cool cases. Generally such fans have had fixed speeds and run at 12 volts. The Silverstone fans have been tested that way; but do remember they are PWM fans, which gives them additional flexibility. Second, 120 mm fans can be used in heatsinks. Fans used this way usually have PWM speed control, so the Silverstone 120 mm fans will be tested against a similar backdrop of other 120 mm PWM fans on a 16 fin per inch (FPI) radiator that seeks to emulate the conditions found on a heatsink. Finally, fans may be used to cool radiators. Back when PWM circuitry was more expensive, enthusiasts often used fixed speed fans and controlled their RPM’s with varying voltage coming from fan controllers. With the cost of PWM coming down, it is more likely you will use PWM fans on your radiators or AIO’s. For that reason these Silverstone fans will be tested against a field of 120 mm PWM fans on a 30 FPI radiator. This emulates nothing except a very tough rad environment.

First the fans were placed in a test stand where their free air RPM was observed. Then the fans’ noise was assessed. The standard proxy for what you can hear is the Sound Pressure Level (SPL), measured in decibels and given a type A weighting (dBA). A silent room is about 30 dBA.

The ambient noise for the current testing was 30 dBA. To measure noise levels that were softer than that, the SPL was measured 10 cm from each fan. It was adjusted to 1 meter by subtracting 20 dB. The sound pressure meter is a Tenma 72-942. It has a microphone that is not accurate under 30 dBA. That means an adjusted measurement of 10 – 15 dBA is not accurate; the fan could easily be quieter than that. But this is the limit of all but the most expensive SPL meters.

Next, the airflow was assessed using a standard measure, cubic feet per minute, or CFM. The air entered a sealed 8 x 8 x 8 box (200 mm on a side) where it was allowed to mix. It would leave the box through an exhaust port, where it was measured with the vane head of an Extech AN100 anemometer, which averaged 10 readings per fan setting. The outflow was measured with and without a dust filter. A standard metal mesh dust filter was used, as can be seen below. The picture shows a Silverstone FQ122 mounted on the testing box, the metal mesh dust filter drawn to the side, the anemometer vane head at the back of the box, and the body of the anemometer.

Next, we show how a 120 mm fan might push air through a 16 FPI radiator, to simulate a heatsink. The first picture shows a Silverstone FW121 mounted on a 16FPI Black Ice Nemesis 140GTS Black Carbon U-Flow Low Profile Radiator. Note the 4 adapters scrounged from a 140 mm fan with 120 mm screw-holes. The anemometer vane head is attached to the rear of the box. You can see it on the right, showing through the rad.

The second picture shows a Silverstone FQ121 mounted on a heatsink. This is where you’ll find some of these 120 mm PWM fans.

Finally, to test 120 mm fans for work on rads themselves, we used a 30 FPI Black Ice GT Stealth 120 XFlow. The picture shows a Silverstone FQ121 mounted on the rad. The vane head is mounted on the rear of the box.

First, we show the Silverstone 120 mm fans against other 120 mm fans. But they are fixed speed fans. This is really a test of how well these fans pull air through a dust filter – of prime concern when you are cooling your case. Remember that SR stands for a “Speed Reduction” cable. 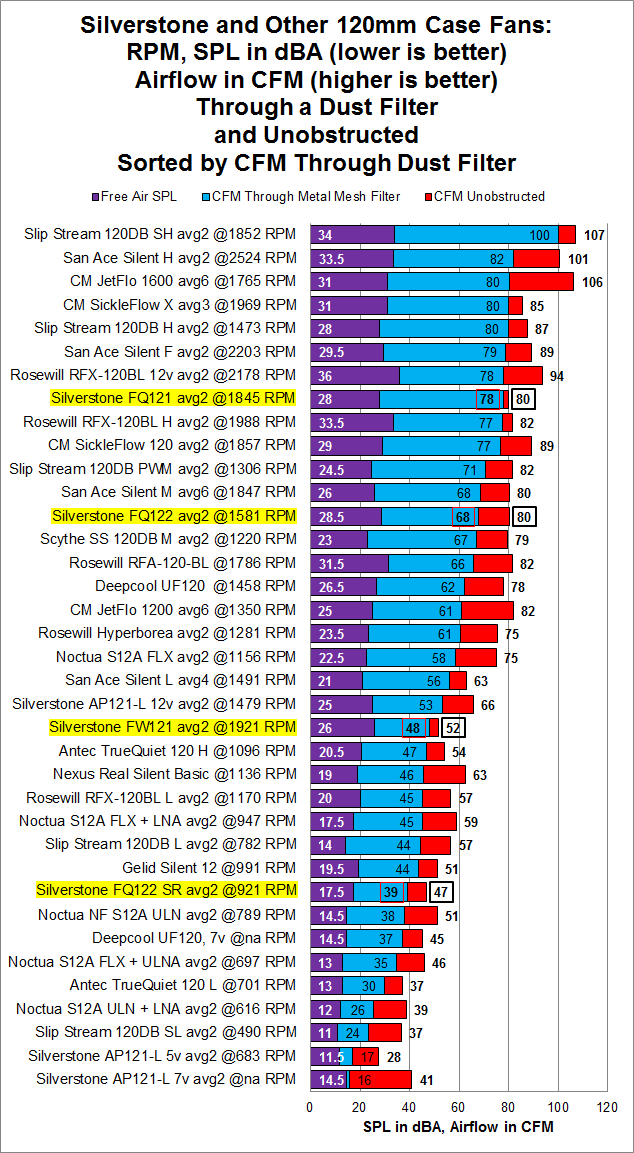 Next we show the Silverstone 120 mm fans, among other PWM fans, as if they are blowing air through a heatsink. You might also refer to this as air-cooling the CPU. 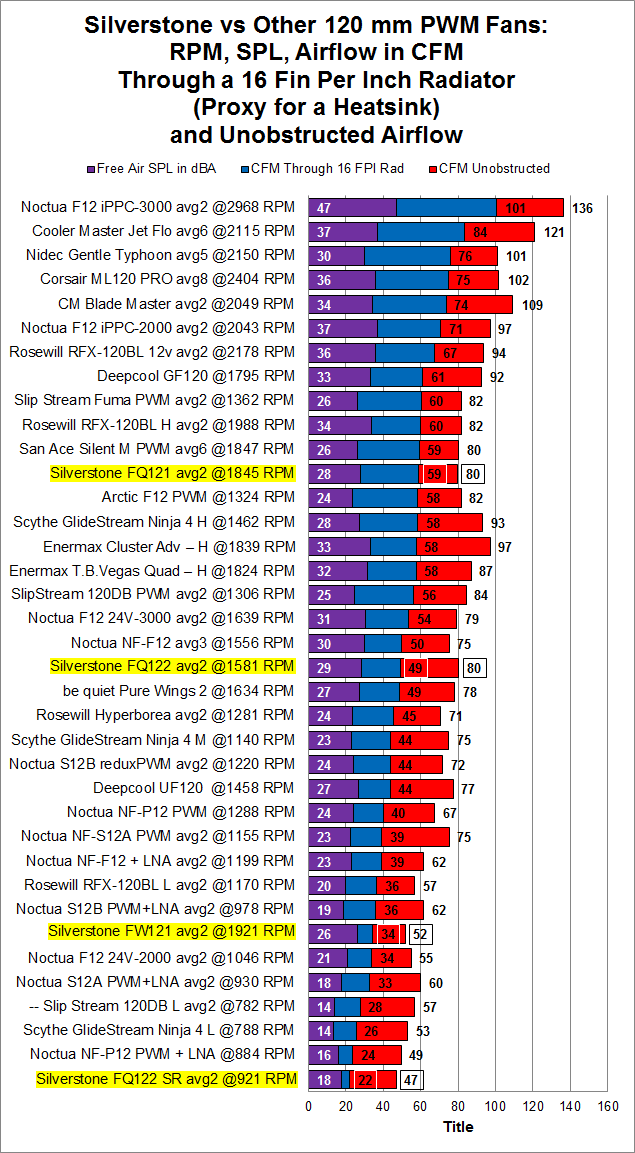 Finally we look at the Silverstone 120 mm fans among other PWM fans doing work on a radiator. This is rad work, water-cooling your CPU. 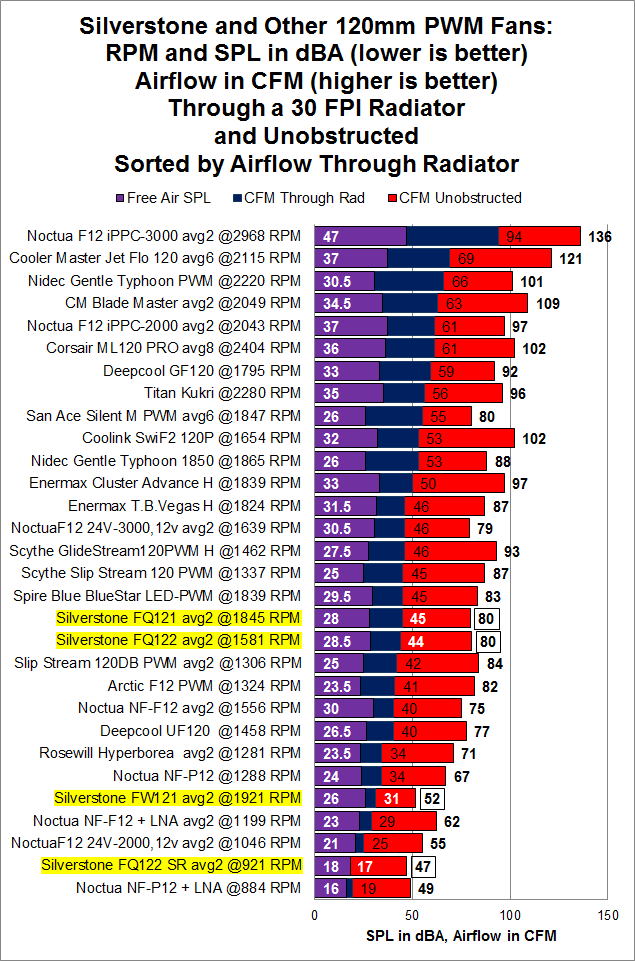 The Silverstone 120 mm PWM fans show a variety of design types. Correspondingly, there will be situations where they fit best. In all settings, though, PWM is a remarkable addition to these Silverstone 120 mm fans, allowing for a flexibility you might find scarce elsewhere.

The Silverstone 120 mm PWM FQ121 seems to be really good as a case fan. It blows more air more quietly than comparable fans. The FQ122 SR is also pretty good in this setting. If you need a quiet fan, this might be what you want, especially if you can set it with PWM. The fan will go quite quiet on idle. You can’t hear a 400 RPM fan.

The Silverstone FQ122 seems to come into its own as a heatsink fan. While putting out a moderate amount of air, it refrains from making much noise while doing it.

When it comes to radiators, the Silverstone FQ121 and FQ122 are about average when compared with their peers on the numbers. Heard directly, they are a bit quieter than you might expect. But really, these fans are better used for heatsink and case fan settings.

Thin fans are hard to find. Slim fans with good performance without serious loudness are harder to find. In the FW121 Silverstone seems to have made a fan that does both.

Today we examine Noctua’s new fan, the NF-A12-25. After more than 4.5 years of development and seeing prototypes throughout that time, the new fan has finally been released. The NF-A12-25 uses different build materials to increase rigidity which allows for tighter tolerances, specifically in regards to the distance between the blade and the frame. Noctua says this design is said to help with increased static pressure and airflow which makes this fan a good candidate for mounting to a radiator. We put the fan to the test against our test suite to gauge performance and see how the new fan fared against other similarly sized fans.

This review takes a look at Silverstone’s GD05B HTPC case. An affordable price tag coupled with a well thought out design combine in another quality case as you’d expect from one of the premier case manufacturers.

When Noctua announced they had released 24-volt fans, I ignored it, asking, “What does that have to do with me?” I had tried 24-volt fans from other manufacturers with unhappy results. But the Noctua rep told me “They actually run nice and quiet in 12V PC environments!” It was at that point I had to test these fans to see how well they do. Do they really run quietly at 12 volts? And how strong are they? Immediately thereafter, Noctua announced their Chromax line of accessories. From having these two releases coming so close together, this combined review was born.