I bought my first Pentium II / III motherboard eight months ago. I decided to go for a Celeron 466 PPGA processor mainly for it’s affordable price. I wanted to do some overclocking, but found out that the 466 could only go to 583 MHz (7×83 MHz) with 2.4 V core voltage.

That was the first time I faced the processor overheating problem. I purchased a larger cooler – two fans – and then one Pentium III cooler which needed some modifications to fit on the Celeron. The temperature at the backside of the processor went as high as 85° C. It seemed too high for me.

I started reading articles about watercooling on Overclockers.com and found out that there were wonderful ideas there for me to use. I decided to build one simple system on my own.

First thing that I made was a waterblock. I purchased a copper plate 50×60 mm and 18 mm thick. It seemed very heavy and I was sure that it is capable of absorbing large amounts of heat. I asked a friend of mine to help who owns a small workshop with a few machines. 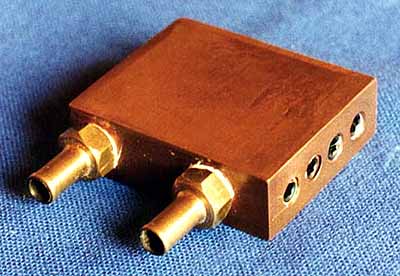 We cross-drilled six holes in a plate, two of a larger and four of a smaller diameter and made two brass nipples. I have polished the surface to be in contact with the processor and used some Teflon tape to seal the two nipples and four plugs in the waterblock. My first waterblock was ready for work!

There was a problem with mounting such a heavy piece of metal to the Slot1/Socket370 adapter and I solved it the way many people have done before me. The simple but effective solution is shown below:

I made one more mounting setup which is usable for both Socket and Slot1/Socket370 adapter systems. It is very simple as shown here: 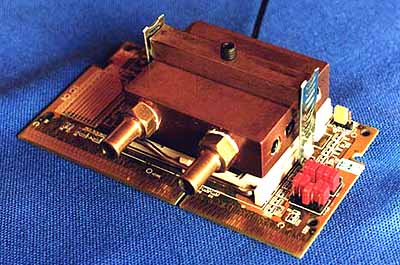 The first test run was made with tap water – coming directly from the bathroom (which is, of course, very close to the place where my computer is) and going back to the sink. The results were amazing – the processor was exceptionally cold, but I have been aware that it is due to cold tap water. It is not going to be that way when I use a pump and an air-cooled radiator. Anyway, the waterblock was working fine and there were no leaks. I was very satisfied.

Next step was purchasing the pump. I chose a simple 220VAC aquarium submersible water pump, which I paid a little less than $10. I had to close the air inlet and it is clearly visible – the white plug with a short hose below. I discarded the water filter since it was very big and, very likely, unnecessary. 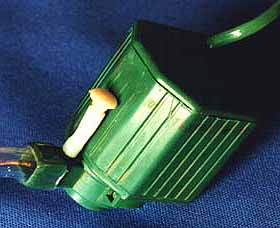 I put the pump in a plastic water container with a capacity of about one liter (about one quart). The reservoir has a cap with four holes drilled in it: one for filling – expansion tube of a large diameter, one for a brass hose nipple for a water outlet and two for brass nipples for water inlet (the flow from the waterblocks). 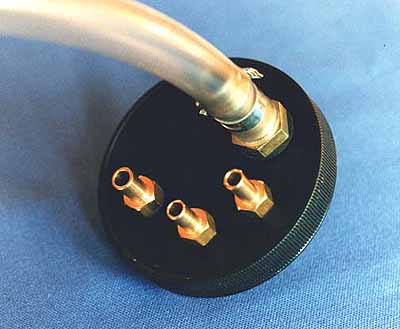 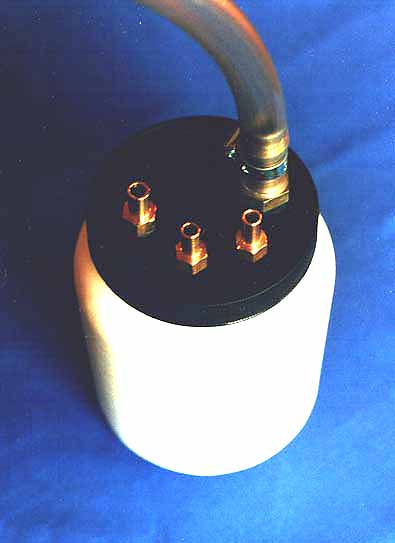 Please note that the diameter of a water outlet (far left) is larger that that of the water inlet nipples. I have put some sealant between the cap and the container so there are absolutely no leaks. 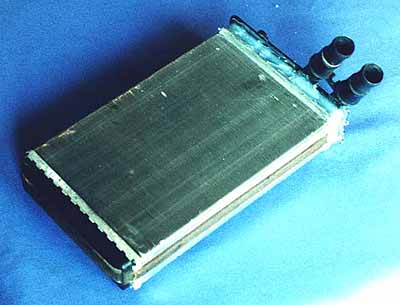 The radiator that I have purchased was a secondhand auto heater from a WV or Audi. It was very cheap (less than $1) since it was broken and I had to seal it with silicone glue. There were no leaks afterwards, so it was ready for use. It is a pretty large radiator, so I had to keep it out of the case. Two brass nipples were bolted to the backside of the case for fitting tubes. It is clearly visible on the pic below. I have not made a radiator stand or case yet and it rests behind the PC case. 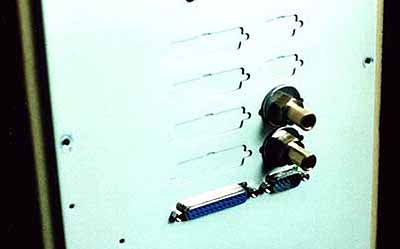 I chose an 80mm fan to move the air through the radiator. It is a very quiet unit and runs with “two speeds”, just like the power supply fan does. I used a front “turbo” switch on the case to change between high and low speed fan operation – simple switching between 12V and 9V voltage. I had to put one 7809 voltage regulator in the power supply for that purpose.

It is now obvious that the low speed is more than sufficient for both power supply and radiator cooling except, maybe, on very hot summer days. Low speed operation is much quieter and the processor temperature difference between the two is no more than 1°C during 100% processor usage with the ambient temperature around 20°C. 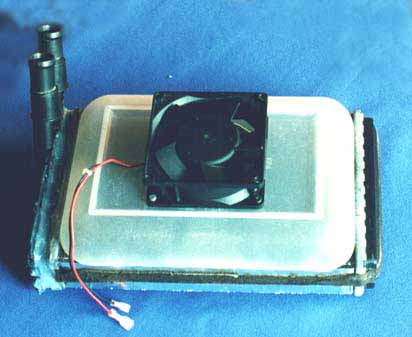 The water from the pump goes directly to the radiator and then back to the “T” water separator inside the case. In the case of a simple 1-waterblock cooling system, the “T” unit is not needed. However, after touching a HOT backside of the video adapter PCB, I decided to make another waterblock for the TNT2 card this time.

I have owned a Diamond Viper 770 video adapter card (nVidia TNT2 chip) for a while now and I am satisfied with its performance. It is shipped with a plain, passive cooler glued to the surface of the chip. The first thing I noticed about it was that the cooler was extremely hot, so I screwed one fan on the top of the cooler, sacrificing one PCI slot that way.

After a while, I checked the temperature on the backside of the PCB, right behind the processor. I almost burned my finger, although the cooler on the other side was not as nearly as hot as it was before the fan was attached. That was it – a second waterblock project was on the way.

I purchased one copper plate 50mm wide and 10mm thick and cut off two pieces: one 40mm wide for the TNT2 and one 60mm long for Socket waterblock. I made them both.

The first and more important one is the video adapter waterblock. It is a cross-drilled type with two holes of a larger diameter where the tube nipples are attached and the three smaller diameter plugged with small bolts. The surface to be in contact with the chip is polished.

A real problem arose when I tried to detach the old cooler. The glue was very strong, but I managed to do it after 15 minutes or so. Then there was a big surprise: the TNT2 chip was concave so the center of the chip (the hottest spot, I suppose) could never be in contact with the cooler. 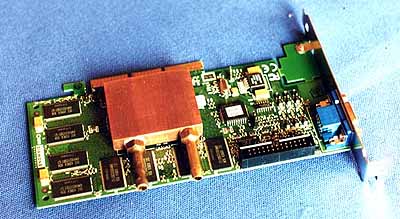 I used a rasp to make the surface even. The contact surface was smeared with thermal paste and the outer rim with silicone glue. I have used a 10 lb weight to keep the waterblock pressed firmly to the chip overnight and the next day everything was ready for testing. I am sure that I have done the job right since the PCB surface at the back of the chip is cold now.

The third waterblock I made does not work yet – it is here just in case I ever purchase a Socket motherboard in a future. It is a nice cross-drilled copper waterblock with nipples at the top, two main and five side holes, all plugged with small bolts. 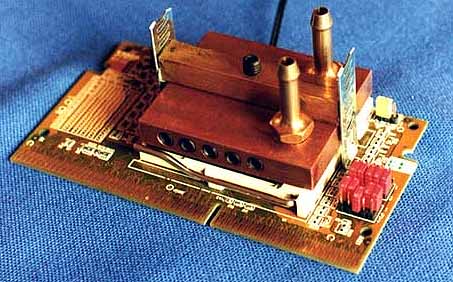 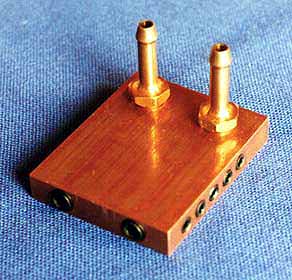 Now a Few Words About the Water Path

Coming back from the radiator, water enters one “T” unit which provides separate water flows for both CPU and TNT2 processors. I have thought of an in-line connection between the two, but since there could be interference and drop in flow rate, I decided to go for a more complicated solution. The inlet diameter (middle one in the photo below) is larger than the other two, so the incoming water flow could be separated as evenly as possible. 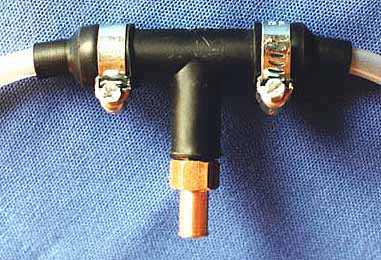 All the brass nipples that I made and used are shown below and were all made in my friend’s workshop. 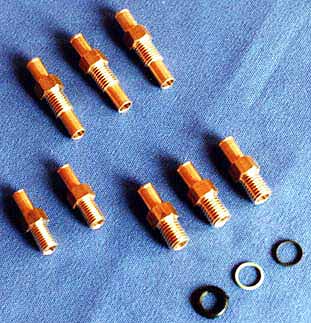 One of the most critical point in tests is the temperature measurement and temperature sensor position. I used to keep the sensor attached to a cooler as near to the CPU as possible. However, this location is not nearly optimal: In case of a bad contact between the cooler and a CPU it is not going to warn one about the overheating problem.

I moved it to a position where its readings do not depend on the CPU – cooler contact: At the bottom side of the CPU. The way I have obtained this is shown on photo No. 13. The small piece of sponge is used to keep the sensor pressed to the CPU surface. I think that this way of reading is more accurate.

I was not able to run all the tests I wanted since I was not able to obtain one high quality cooler like the Alpha. Anyway, I had my old, big Pentium III cooler with two fans attached and the only result I have from a couple of months ago while I was still using it is terrible: The temperature at the bottom side of the CPU was going up to 85°C! So how does it look like now? 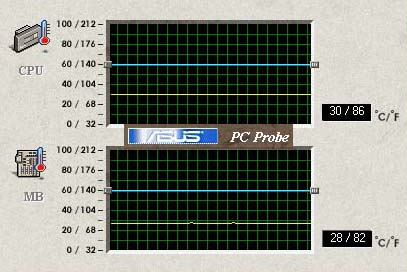 At an ambient temperature of 18°C, the CPU idle temperature stays at 30°C, as shown above. I turned off the pump to see how long the system could work if the pump breaks down. The temperature would not go over 48°C after 1 hour! 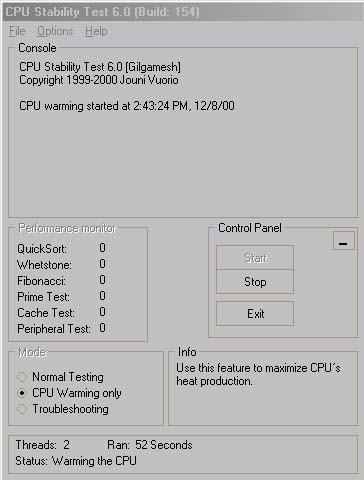 The high-stress test that I have used to check the capacity of the system is CPU Stability Test 6.0, as shown above. The highest temperature that the CPU reached was 50°C at an ambient temperature of 20°C, as shown below. I had to try the pump breakdown test again: It took the CPU 4 minutes and 20 seconds to reach 70°C with the pump turned off – I think that this is a very good result. 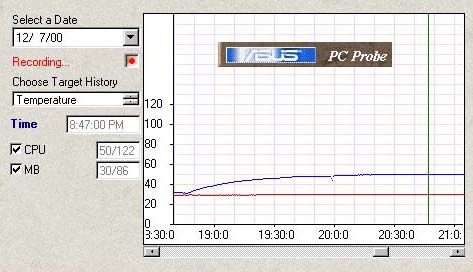 The Diamond Viper V770 has default core clock of 125 MHz and memory clock of 143 MHz. Now, after the waterblock has been attached, the core clock runs stable at 170 MHz and the memory clock runs at 190 MHz. Works fine for me and my favorite (and only one I use) “game” – Flight Simulator. 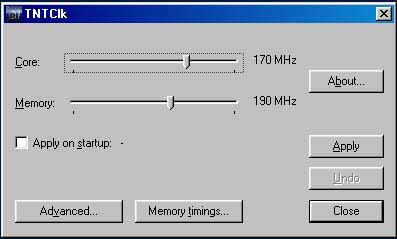