Yesterday, I mentioned that AMD had an analyst conference with with lots and lots of slides

Today, let’s look at more of them, and see what they tell us.

For The Short and Medium-Term 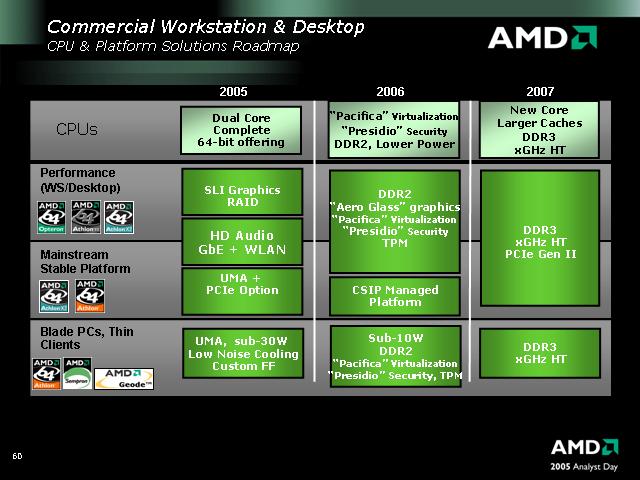 This confirms much of what we already knew about the 2006 (please note if you haven’t already that “Presidio” is AMD’s version of TPM, which is the hardware DRM you’ve heard about on the new Intel boards), but adds a few interesting tidbits:

A few websites got to tour the place. Wonder who paid for the trip. 🙂 The timing of this trip should raise a few eyebrows. AMD will release its financial earnings tonight. The overall numbers for the quarter will be

Intel’s decision to take a heavily-cached Xeon and let it go slumming with gamers is a pretty brilliant tactical move against AMD. It’s quite ironic, given AMD’s penchant for secrecy to the point of silliness, that Intel did the last-minute

Can you post a link to the article if it's not too much trouble?

I didn't know that Intel was moving towards processors with less pipelines and less cache, I thought that they would follow the success of the Pentium M's for their future processors which currently have 2 MB cache I believe. However, I will take that back if what I read in the article is different.

I also noticed that DDR2 and PCI-e are only going to have about a 2-year lifespan. I'll stick with DDR1 and AGP for now thank-you.

What i meant was that more cache is more helpful on P4 like designs partly because they make lots of failed branch predictions partly because they rely on a northbridge memory controller causing higher latency (so it's nice to have a huge L2/L3 cache). As we have seen on the short pipeline semprons, halving the cache to 256K often has very little impact on performance (hence the 128K semprons). I just thought it was funny that AMD was moving toward designs that would NEED more cache and intel after getting their fingers burnt with the P4 (northwood was ok, but willy and pressie were hardly great) seem to be moving back to a more athlon like design (well more PPro/P2/P3 but certianly not very netburst like).

I also noticed that DDR2 and PCI-e are only going to have about a 2-year lifespan. I'll stick with DDR1 and AGP for now thank-you.

I'm pretty sure the PCI-E Gen II thing will still run PCI-E hardware, just you would need a Gen 2 mobo to use any gen 2 hardware. Didn't the original PCI haver versions as well?