Well here I am, with a pair of headphones on my head that, new, would cost two thirds of my car…

That slippery slope has struck again, but at least it should be pretty much an end-game pair of headphones…

The ATH-W5000 are Audio Technica’s (AT) flagship headphones and are regarded by some as the very best dynamic headphones money can buy. Lets find out if they live up to their name.

Not many headphones command a section devoted to the packaging, but the W5000 is one of them.

The headphones come in a very nice plastic hard case with the Audio Technica logo on the front, as well as the model name.

On the right hand side there is a single buckle clasp. This does not lock, but is very strudy and is, like most things, branded with the AT logo. On top, there is a sturdy fixed handle and four rubber feet protect the bottom of case.

The hard case has superb build quality and is a really nice feature when paying this much for headphones.

Upon opening the case, you are greeted by your headphones, nestled in red velvet surrounding every part of the headphones. This is incredibly lush and a very nice touch. Along with the headphones, you will have two documents, both in Japanese with no translation. One looks to be the warranty info, with the serial number on and the other appears to be blurb about the headphones. 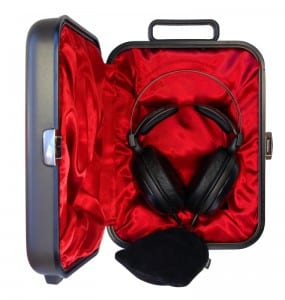 Look at that velvet ... ! Image courtesy of audio-technica.com

To carry the headphone cable, there is a soft velvet pouch with a drawstring attached. This is just big enough to take the whole cable coiled up.

I know that you shouldn’t judge headphones by their looks, but for me, it is part of the overall experience.

The W5000 have cups which are made from striped Ebony, which look stunning in person. They are polished to a shine and contain the make, model and nickname of the headphones (a thing that only the top AT headphones have). In this case, the nickname is ‘Raffinato’, which means ‘Polished’, ‘Refined’ and sophisticated. This may seem a tad pretentious, but is nice and is done very well.

They are dual entry, meaning one cable goes into each cup. This might seem like a PITA, but keeps the top headband from having to worry about holding wires (unlike the AD700’s). The headbands themselves are two thin strips of black metal, which suit the theme of the headphones very well.

Going down from there, you meet the 3D wings, which rest on top of your head. These are covered in a black mesh rather than leather, which is very comfortable. All of the hardware holding the wings and headphones is coloured in a black matt finish, which again, goes with the whole theme of the headphones.

On to the cups themselves. As stated previously, they are made out of polished striped ebony with a matte black plastic ring around them. If you look carefully, you can see a tiny gap between the wood and plastic ring all the way round. This gap provides a big function in the sound, by not making the cups completely closed thus giving them a slightly larger soundstage.

The pads of the headphones are made from real leather and are incredibly soft. They provide good support, but do fold down nicely around your ears. 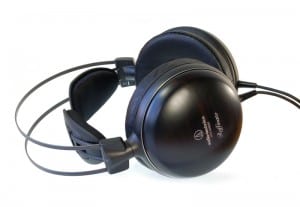 If AT are renowned for anything, it is for the comfort of their headphones. Every headphone in their ‘Air’ range has the same design (the 3D wing system). All of this range has the same loose fitting feel and can be described as wearing two pillows around your ears. This means that spontaneous headbanging will throw them across the room and should be avoided at all costs !

The pads are circumaurul, which means that they cover your entire ear. The lowest part of the pads rests just above my jaw bone and the highest part rests halfway between my ears and the top of my head. The pads give enough support as to keep your ears off the drivers, which allows the headphones to be worn for many, many consecutive hours.

All of the AT Air headphones will fit all head sizes due to the auto-adjusting nature of their wings.

The stock cable is about 3m long with no writing at all on it. It has a very beefy metal plug on one end, moving up to the plastic splitter (bearing the AT logo) and on to to stress reliefs at both entry points to the cups.

These are incredibly well made headphones and will last a very long time.

I shall use the following pieces of music to judge the performance of these headphones :

My test setup is as follows :

All songs will be played from their studio CDs with no audio effects set in the PS3 settings.

A note on the amplification of these headphones and how they scale with amplification – I am playing all of the songs with the gain set to ‘High’ on my compass. The volume dial is at about 25% of the way round. I choose ‘High’ because, I believe it gives more body to the music.

Playing them straight out my Creative Zen X-Fi is pretty suprising, as it takes 80% volume to get to the same level as with the amp. However, one you are there, the mp3 player does a stellar job and makes itself proud.

However, if you’re listening to these with an MP3 player, you should be slapped.

This is Muses’s first song on their album, Origin of Symmetry.

In the first 20 seconds of this song, there is a electronic synth playing a rapid scale of notes, moving upwards and then downwards. This is caught beautifully on the W5000’s and completely fills your head. At around the 20 second mark, the electric guitars and drums come in, suddenly. I choose this song for the guitars main riff throughout the piece. You clearly pick out the Electric guitar, bass guitar, synth and drum kit in this section. The bass guitar is not overpowering but very clean and precise.

This is the second song on Miles Davis’s iconic album Kind of Blue.

I choose this song because it is my single favorite piece of music to listen to. A combination of great musicians, superb recording and a genius leader (Miles) make this a piece of music that can be listened to for relaxation or for analytical listening.

The song starts off with Miles and John Coltrane play a relaxed melody over the piano, drums and double bass in the background. As always, the instrument separation is spot on, each individual instrument having a spot in my soundstage. After this first section is complete, Bill Evans goes on to perform a piano solo, which sounds as if it is really in the room with me. After this Miles’s trumpet pierces through the instruments to play a solo. This again shows of the W5000’s superb separation, as you can plainly hear all of the instruments in the background.

If you have never listened to this song, I implore you to try it and indeed the whole album.

This song starts off with a very busy section involving all of the instruments with the synthed violins taking the melody line. Unlike the previous two songs, the sound is a lot more ‘muddy’ and its harder to pick out certain instruments. I am sure that this is to do with the recording, rather than the headphones though. Much like the first piece, the guitars sound very good and life-like. The bass is less pronounced than in Bliss, but still is there and very controlled rather than bloated. The crowning moment of this piece is when the lead singer comes in. The voice is just right. It neither stands out too much, drowning everything out nor too little, letting itself be drowned out. It simply soars over the top of the accompaniment and gives so much to the song. This is further demonstrated towards the end of the song in the harmony section, where the whole band is singing.

This is the seventh song on the album Absolution by Muse

Like Bliss, I choose this song due to its guitar riffs, which are the very best I’ve heard, both the lead guitar and Bass gutar. This song is also very diffucult for headphones to reproduce well, due to the powerful bass line, guitar riff and voice. These sections all demand attention and can make the song very muddy on bad speaker/headphones. The starting section is just the bass riff, which is instantly recognizable to anyone who has listened to this song. Again, like many other songs, the bass is not too much and is very tight and controlled. For this section, the headphones need to be very fast in reproducing the steps in the riff or else it becomes a very liquid sound. Overall, the W5000’s handle this song well.

This is the fourth song on the album Explorations by Bill Evans.

I choose this song due to the airy light contempary style of the song. For those that do not know, the whole album is filled with comtempary jazz, mainly played on the piano. At the start we hear the lone piano of Bill Evans, shortly to be accompanied by Scott LaFaro on the double bass and Paul Motian on the Drums. The piano is light and forward, whilst the bass is deep and resounding. This piece of music shows off the W5000’s bass, which is light and controlled. In the background, you can hear the distinctive sound of using brushes on drums and the high-hat keeping time. The brushes produce a sort of hiss, which can be mistaken as distortion, but is not.

This is the fifth song on the album Only by the night by Kings of Leon.

I chose this piece simply because of the voice in it. It is stunning. The piece starts off with a lone synth. After some time, the Bass and Drums join. The drums are playing a very strong, forward beat which pierce through the whole music. The voice then enters. It soars over the melody and sounds slightly rough (intended), which makes it so unbelievably good.

Starting with the Allegro ma non tanto, this concerto is one of my favorite pieces of classical music. This recording is played by Vladimir Ashkenazy on the piano with the London Symphony Orcehstra behind him.

It starts off with a very recognizable melody played by the piano, over the rest of the orchestra. At about three minutes in, the music drifts into a much darker mood with the whole orchestra taking on a more sinister mood, which is pulled off nicely by the W5000s. At twelve minutes, the song changes again, where the pianist is playing big majestic chords, with the left and right hand following each other. These chords are adapted versions of the main tune.

All in all these headphones do very well with most types of music, but really perform well playing acoustic music like Jazz and Classical.

This is unfortunately a bad point for these headphones. According to AT’s website, the MSRP is £900, which is a lot. They can be had at around £800 if you look around.

Fortunately, I got my pair second hand in the States and paid around $500, which was a bargain.

These headphones are also pretty hard to get hold of, especially in the UK, being mostly sold in Japan.

In conclusion, I can say that they do indeed live up to their name as one of the best dynamic headphones money can buy.

Headphones like these are a huge investment and really should be tried before they are even thought about.

If you’re looking for comfortable headphones, which can play almost any type of music asked ; these are for you.