SUMMARY: The Golden Orb is a capable heatsink and the PIII version should be a standout performer.

NATA Computers was kind enough to send me an advance sample of the new PIII Golden Orb. We tested the Socket 370 version HERE and found the ORB to be a very capable performer, although some care must be exercised in mounting it. 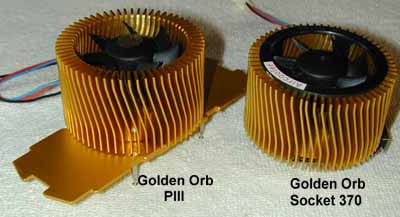 The PIII version uses familiar pin mounts so there is no concern about shearing off anything here. I do not have a PIII slot 1 handy so I could not fully test it out yet, but the PIII version is the same unit as the Socket 370 version so I would not expect any significant performance difference. 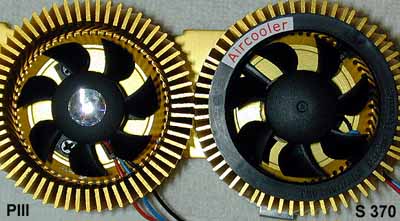 The business end of the PIII is smaller (29 mm vs 34 mm) than the Socket 370 version and noticeably smoother. There are no machining marks on the base and, if you lap it, it will not take much time or effort.

The fin arrangement and size of the two units are exactly the same – I compared them visually and they are identical.

Thanks again to NATA Computers for letting us take a sneak preview of the PIII Golden Orb – we’ll run some tests on it but all indications are that it will perform as well as the Socket 7 version.


The Effectiveness of Air Ducts in CPU Cooling

Summary: This article demonstrates how an external air duct can produce CPU temperatures which are as little as 7C above room temperature, and -1C to +9C above case temperature. This is done by cutting a hole in the side panel