I meant to submit these pictures a long time ago but didn’t get around
to it, but inspired by recent waterblock articles, I took a few minutes
to write this.

I made this waterblock in October 1999 for my old Celeron system: 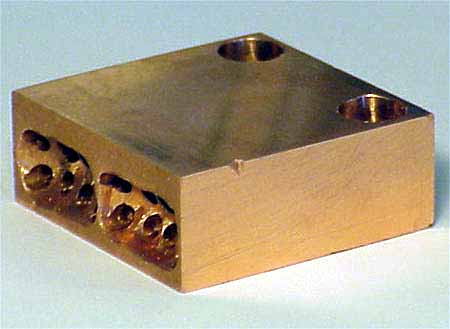 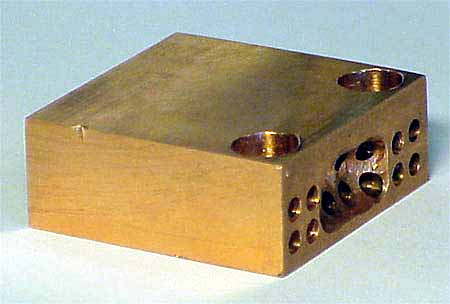 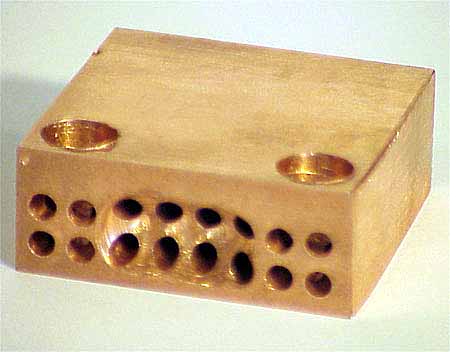 My thinking about the construction was “How to get as much surface area
as possible”. I figured that would be by having multiple
smaller-diameter holes. In order to avoid getting too much
flow-resistance, I decided to couple small holes in parallel.

As you can
see, I ended up with 16 holes, each 4 connected in parallel for 4 passes
total. Hole diameter is 4.5mm. If you try to go smaller, you run into the
problem that normal drill bits are too short so that waste material can not be transported out of the hole.

I compared the cross-section and circumference of the holes (surface area
of the channels) to one 10mm hole, since that would take up about as
much space in the block:

So by this comparison, the 4 pcs. 4.5mm holes in parallel gives 81% more
surface area than one 10mm hole.

Whether this approach is better than a maze or cross-drilled type of
block is hard to tell. To me it seems that, if the thermal conductivity
of the copper was near infinite, then surface area matters very much
for efficiency, because the heat would be able to spread perfectly to
all the surfaces where water passes. But with the thermal conductivity
being a finite value, I can’t say for sure that this is better than all
other approaches. And then there’s turbulence – it would have
to depend on a test I guess.

I figure the cross-section is sufficient since the inside diameter of
the copper tube in my Danger Den look-alike radiator (bought from
coolerkit.dk) is only 8mm, which makes a cross section of only 50 mm2, so
my radiator will be the limiting factor for flow.

When machining the block, I found out that this has an additional
benefit: It’s much easier to drill small holes on a cheap drill press
because it produces less vibration¹.

The large vertical holes for the barbs (which are really just small
pieces of copper pipe) were a problem to drill on the drill press I
used, and they did become larger than expected due to violent
vibrations. I solved this problem by wrapping some copper wire around the
copper pipe before soldering to make it fit – I never had any problems
with leaks. Soldering is definitely the way to go for assembly.

To connect the holes together at the ends of the block, I used some
grinding bits I picked up at the hardware store in the drill press. It
really wasn’t that difficult, but the grinding bits do wear out quickly.
I think I used up 3 of them, but luckily they are very cheap. If I
remember correctly, I took it back and machined a bit more thereafter,
taking the pictures above, to make those connections a little deeper and
provide better flow. 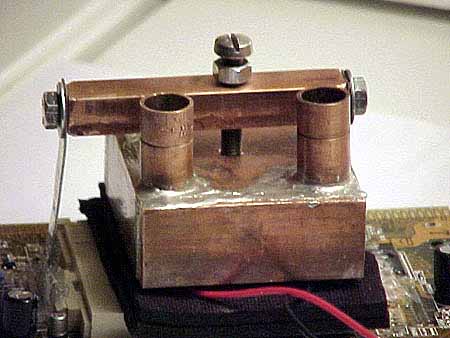 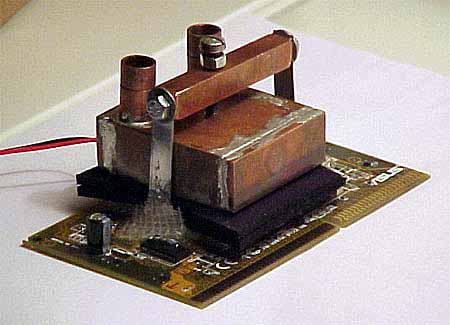 Please do not pay attention to the clip – It was made from
hose-clamp material bent to engage the socket lugs – and broke them
off. This is one area where the quick’n’dirty way just didn’t pay.

I sealed off the ends by soldering on two copper plates. I used an
all-metal clamp to hold it together while soldering it over my gas stove
in the kitchen. The plates I used are 4mm thick and I don’t think they
need to be that thick, but they should not be too thin since they may
then warp when you apply pressure with the clamp.

After soldering, there is only the leak test and lapping left. Rigging
up some hoses of different diameter to fit the water-tap in the kitchen
and blocking off the other hole on the block is a good way to reveal
any leaks, since you will be testing at quite high pressure. Mine had no
leaks first time around.

Bloody good I’d say 🙂 But then I never had anything to compare it to.

I managed to run 920 stable and in stealth mode with my old Celeron 566,
and 980 with a peltier. I now have a XP1600+ on a ECS K7S5A, but have
not been able to push it yet. I soldered a voltage & multiplier mod on,
but haven’t unlocked the CPU yet. But is does 150FSB/1575MHz without
breaking a sweat (in-socket thermistor reading of max 36 degrees and
water temp of 30 degrees under full load, still in stealth mode).

¹I later on made a smaller, simple cross-drilled block for my Geforce card where I drilled 8mm channels. It turned out to be impossible on that small/cheap drill press due to vibrations (and/or
ineffective restraining), so this is something to take into
consideration if you don’t have access to professional equipment.