– Nifty way to use socket heatsinks on P4s – Joe

SUMMARY: A nifty way to recycle SocketA/370 heatsinks to P4 motherboards, although P4 heatsink use may require some modifications.

Millennium Thermal Solutions called me up to test out a P4 adapter. This device replaces the standard P4 retention bracket with a metal version which has three socket lugs on all four sides (why all four, I don’t know) in addition to the standard P4 mounting lugs. If you have a favorite Socket A/370 heatsink, you might be able to use it on a P4 system. If you find a super P4 heatsink later on, you can use it on the same bracket.

The adapter comes with three parts: 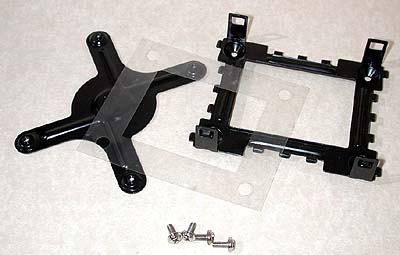 A top retention bracket, backplate and plastic shield to protect motherboard components from shorting out. 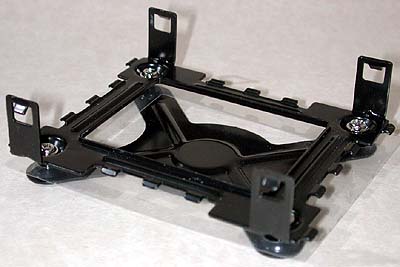 The four posts have a small metal tab that protrudes from the hole which engages the heatsink’s arms: 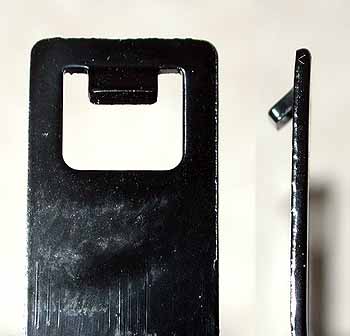 I tried a number of heatsinks and had no trouble; Scott purchased the adapter and alerted me to a potential problem; he found that for some P4 heatsinks, the tab results in too much pressure when engaging the retention arms and the P4 heatsink would not fit.

I tried the adapter with a standard Intel retail heatsink and found that it does not fit – too much pressure has to be applied to engage the retention base.

The solution is to file off the tabs, which then makes the adapter profile exactly the same as the standard plastic retention base. I found the easiest way was to grind the metal tab as close as possible: 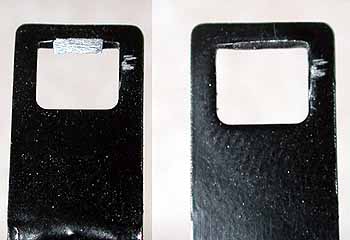 On the left you can see a small tab left after careful grinding. I then used a small metal file to true the bracket, as seen on the right. It took about an hour to do all four holes. The metal is relatively soft, so filing went quickly – I took my time doing it.

Another possible problem is due to four metal tabs that protrude from the base, outlined in red below: 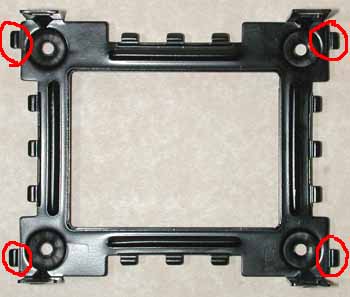 Alexander wrote me that

…on my Soltek 85ERV motherboard the adapter does not fit
unless you remove the tiny tabs sticking out from the corners of the
adapter to its right and left. Luckily I had my tinsnips handy when I was
installing it, but with those tabs there it would not have fit.

Apparently some motherboards may have components close to the base such that the tabs may preclude fitting the base.

The adapter was tested on a Lucky Star P4A845D with a modified P4 1500 to read CPU case temps. I replaced the standard retention base with the adapter. The back plate has a plastic pad so that contact with the motherboard’s back will not short out anything. I tested the backplate with a multimeter to see if it would conduct electricity, and it does not. However, if the paint is scratched, it will, so the pad is a good move.

To test out the adapter, I tried a Millennium Glaciator II (one lug mounting) and a Swiftech MCXC370 (three lug mounting) to cool the P4. Be careful here: Make sure that the contact area of the heatsink will cover the P4 – some socket heatsinks have a contact patch that is smaller than the P4 top plate. I used Arctic Silver for thermal grease.

Note also that there is a plastic shield that is placed between the motherboard and the top retention bracket; this is to ensure that surface mount components around the bracket are not damaged or shorted out by a metal heatsink clip.

Considering that these heatsinks were not designed for P4 use, they performed quite well. In fact, they rank at the upper end of Heatsink Rankings for P4 heatsinks tested on this motherboard.

Further, note that the Swiftech’s MCXC370 on the P4 showed a negligible 0.01 C/W difference to Swiftech’s MCX4000 ; considering that the MCX4000 is basically the MCXC370 with a P4 mount, there should not be a substantial difference between them.

This P4 adapter is easy to use and a secure method to recycle socket A/370 heatsink for P4 use. It’s also a lot sturdier than the plastic P4 retention brackets.

The P4 adapter is available from Millennium Thermal Solutions early next week.

We all hear the term “budget system” thrown around loosely when talking about a low cost computer gaming system. But often times I see the so called “budget system” costing more than $500, and people seem satisfied with that solution.