I never intended to buy a willy, but when I saw an unlocked sample I jumped. 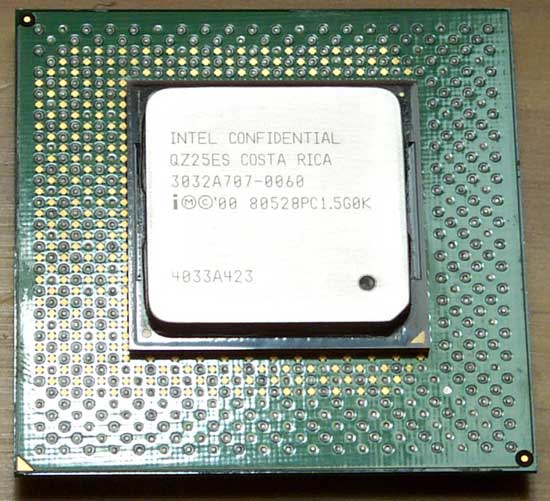 I’ve got some results you might be interested in. Not really a review, just some benchmarks from the P4T and unlocked P4. I played around with the bus and rdram speeds to see how far they would go.

Last night when it was cold (about 50F ambient) I pushed the board all the way to 133 FSB, which equates to 535MHz QDR. I succeeded in pushing the Samsung PC800 rdram up to a whopping 1040. The board proved reasonably stable. I was able to run the team lamb chop seti file to completion with no problems. I consider that to be a fairly decent test – as it taxes the system heavily for over four hours. My experience has been that an unstable system will either hard lock, or simply reboot if it can’t handle seti.

This afternoon I tried the same tests, only this time the ambient temp was about 72F. I attempted to isolate problems by lowering the rdram and cpu as close as possible to their rated speeds, while pushing the chipset to see how far it could go. Of course I can’t say with any certainty that the instability I’m seeing now is not coming from the hard drive or pci cards being warmer now as well. At any rate here’s how it fares. At 72F the chipset refuses to operate reliably past 118 FSB. Since I was limited to this speed, I couldn’t push the rdram as high as I did last night, so there’s no telling if it could handle those speeds at this temperature. I venture to say no. I’ll have to glue a lasagna cooler on the north bridge and see if that helps. It’s interesting to me that Asus is using the identical heat sink and clip that Intel uses on their reference board.

Here’s what I was able to do in that chilly environment with air.

Out comes the Swiftech 462w. Side note, this cpu acts like some tbirds – it likes default voltage better than an increase.

After using it for a while, I have to say it’s more interesting than I expected. Granted I have it overclocked, so I’m seeing better scores than most reviews so far, but it intrigues me in other ways. It does some things extremely well, particularly memory intensive stuff obviously, but it’s ho hum with other things.

In general I get the impression that, had they not gutted it so badly, this would be a VERY powerful cpu. Lets pray they refit it when they go to .13 – then we’d really have something new to talk about.

1) Even though the first desktop chips are supposed to show up in early next year, this isn’t even going to get a fighting chance to go mainstream until the CPU manufacturer gets to 45nm, simply due to size. Since

When is a virus not a virus? When it’s part of a marketing campaign. Essentially, some electronic greeting card company offers you a card, but to see it, you click off on a EULA and essentially agree to spam all