I recently changed the location of my tower from the floor to the top of my desk for easier access to the drive bays. Once I turned the computer on for the first time in its new location, I realized that the noise level that was bearable on the floor was not acceptable at ear level.

After doing a little research on fan controllers, I came across a little program called Speedfan and thought it couldn’t hurt to give it a try. Fortunately I found that my motherboard supports it’s fan controlling features. Not all motherboards are supported.

I’m writing this article for two reasons: First, Joe asked me to after I emailed him about the T-Balancer. Second, it appears that the author of Speedfan needs more input as to what motherboards are supported and to what extent. I hope that many of you will give it a try and send in your info.

Speedfan installs much like any other program, so I’ll start with what you see when you run the program first. 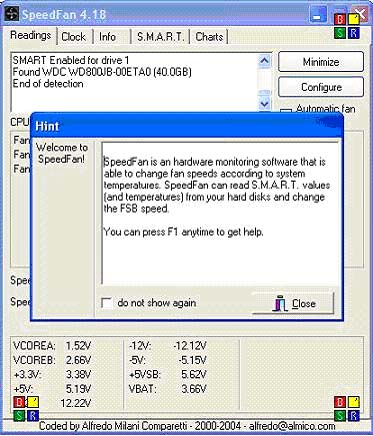 This gives you an idea of exactly what the program does. You can see that it has detected the sensors on my motherboard without having to input any information. 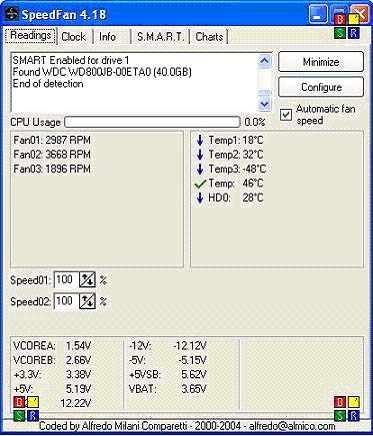 The first Tab is the Readings tab. Here is where a lot of the action happens. Already you can change the fan speed manually and see what your motherboard is reading for your temps. Experience should tell you which sensor is which.

On my NF7, Temp 1 is the “Case temp” and Temp 2 is the “CPU temp”. Fan 1 is my CPU fan, Fan 2 is the “chassis fan” and Fan 3 is the lead from my power supply fan. You can see that “Automatic fan speed” is already checked, but will not work. You have to configure Speedfan before that will start working. 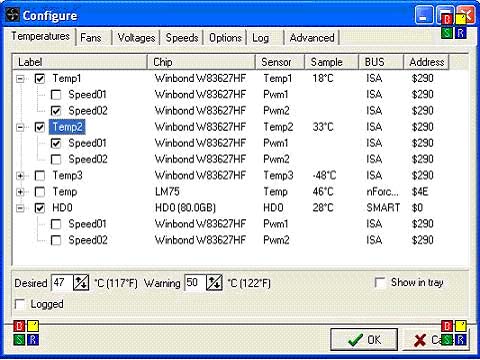 This is the Tab that Speedfan uses to control the fans at certain temps.

A “Speed” is simply a fan that Speedfan can control. My mobo has three fan headers, but can only control 2 of them, the CPU fan and chassis fan. When you first see this tab, everything will be checked so that all temp sensors will affect all speeds. These settings can get a bit confusing and will take a lot of experimenting to get right.

For me, Temp2 is the CPU sensor while Speed01 is my CPU fan. I only want my CPU sensor to affect my CPU fan, so I selected Temp2 and unchecked Speed02 underneath it. Since I don’t know what Temp3 and Temp are, I unchecked them so that they will not affect fan speeds. I unchecked all of the speeds under my HD0 sensor since I have no fans that can affect the temp of the drive.

I also set up the temperatures that Speedfan will use to adjust my fan speeds. At 47ºC, it will start ramping up to the “maximum” setting that I will set in the “Speeds” tab. At the warning Temp of 50ºC, the fan will go to 100% no matter what. Similar steps were taken for Temp1. Again, a lot of experimentation might be required between this tab and the Speeds tab which I’ll skip to right now.
{mospagebreak} 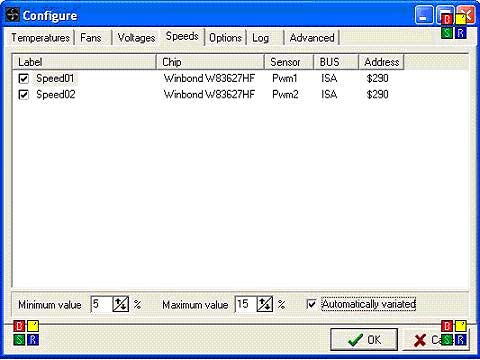 The program uses the PWM (pulse width modulation) controller that is on your mobo to control fan speeds. PWM uses varying pulses of the full 12 volts rather than stepping down the voltage to control the fans. The benefits of this are that you can have a lower RPM on your fan and the process is simply more efficient and produces less waste heat.

When you first see this tab, the minimum and maximum values are set to 100 and “automatically variated” is unchecked. You must put a check in the box and change these numbers before Speedfan can change your speeds automatically.

It is my understandings that the numbers vary greatly depending on your mobo and your fan selection. Experimentation is the only way to know what to set here. For me, my fan shuts down under 5% and remains practically silent at that point. Since I have a good heatsink it stays at this setting while I do most things on my computer.

If I start gaming or stress testing, then RPMs will ramp up until the temperature stabilizes at something at or under 15% which I have set as the “maximum.” I know from experience that this setting should handle most anything at a reasonable sound level. Remember – back in the “Temperatures” tab that we set a “warning” temp, so if for some reason it’s a really hot day and the temps start to climb, it will go to 100% as a safety precaution.

Speed02 is my chassis fan and is on the side of my computer pointed at the chipset, HSF, and RAM. I have that one set to work off of my “case” temp in a similar fashion. 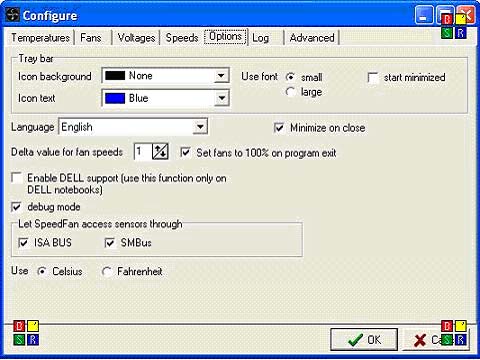 The only other really interesting tab is the Options tab.

In this tab, I changed the “Delta value for fan speeds” from 10 to 1. This changes how fast the program responds to temperature changes. I chose it to respond more slowly, since my range is small and I’d rather not hear my fans as much as possible. I also checked “Minimize on close” so that it’s harder for me to accidentally shut down the program.

I think it’s important to leave “Set fans to 100% on program exit” checked as a safety measure, but this could be used if you didn’t want a program running but wanted to reduce your fan speed. I will say the Speedfan seems not to use much in the way of resources. 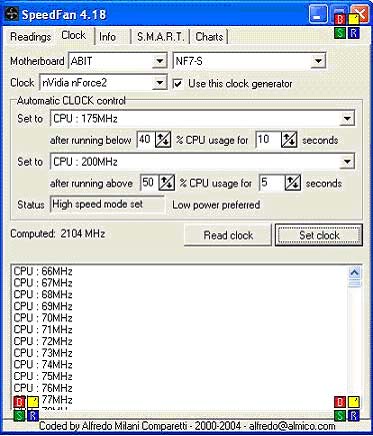 Closing out of the configuration screens, the next tab is “Clock”. After a little warning from the author, we can set a low power mode. The options here are pretty self-explanatory, but I found out while experimenting that the warnings were quite true. Even with the lock on the NF7 bus, I would get lockups if I got too crazy with these settings. A low power mode under 166 would assure me a lockup when it went into effect. A cannot explain this, but it would be nice to be able to set it lower. 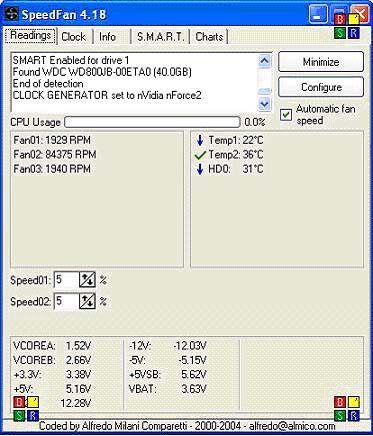 Here is a final look at my readings after configuration. A point to note is that when you change the speeds, it really messes up the RPM sensors. If you look at Fan02 on this readout, you can see that there is no way it’s running at 84375 RPMs.

There are quite a few features that I have not gone over which are quite useful. S.M.A.R.T. will tell you a lot about your hard drives even if you don’t understand all of what it’s saying. I found the charts to be useful in finding voltage fluctuations. My 12v line is CRAZY! It can fluctuate in spikes more than a volt – I might need a new power supply. I previously used Motherboard Monitor to tell me these things, but it wasn’t nearly as precise.

Overall I’d say my experience with this program is great, especially when you consider the price – you just can’t go wrong (It’s free). I know a lot of you guys Fold and think that this is not something you could use. But I bet that even while you fold, a lot of you have some room to quiet things down a bit.

I would like to offer a word of caution, though. Please choose reasonable settings. Just because the maximum temp for your CPU is 70 degrees does not mean you should ever get close to that. Sensors on motherboards are wildly inaccurate, so be safe.

I’ll be happy to take some questions. But keep in mind I’m not an expert, just a fan.

Kevin Dixon – aka Shroomer in the Forums

Gigabyte and MSI are at it again…this time Gigabyte fires back at MSI on their claims that Gigabyte boards aren’t really ready for native PCIe Gen3.