An aluminum unit that might be a good price/performance buy.–Joe 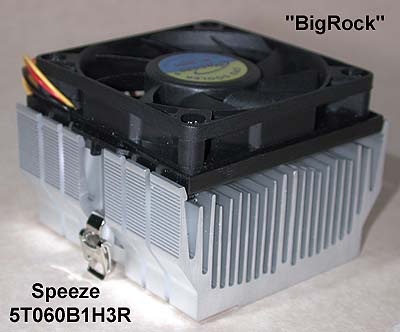 Speeze¹ sent samples of some of their latest heatsinks for a test; of particular interest was the “BigRock™” unit. This is a large aluminum extrusion unit featuring a 70x15mm fan, rated at 26 cfm at 4,200 rpm, 31.8 dBA. 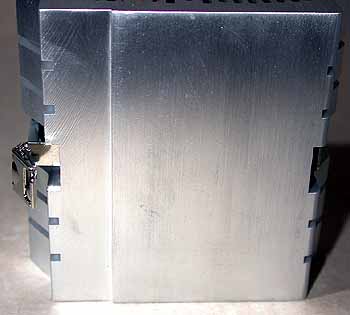 The base is OK – no gross machining marks. It would probably benefit somewhat from lapping. 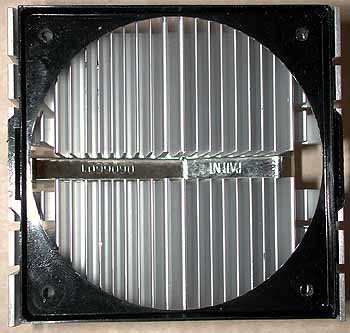 Removing the fan reveals a plastic carrier for the fan. This raises the fan above the fins, which minimizes noise somewhat.

The clip has two “ears” that serve to index the clip – this means that every time you mount the BigRock™, it will sit exactly the same, as the heatsink can not move along the clip’s axis. This is a good move, as it prevents the heatsink’s base from contacting the cam box (the high part of the socket) when you mount it correctly; we’re seeing more of this in heatsinks. 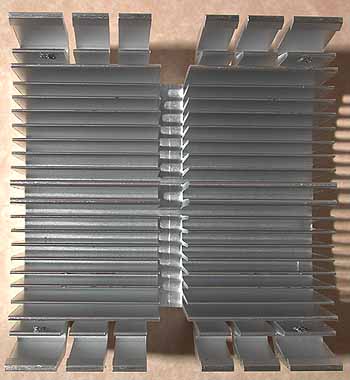 Removing the plate reveals a relatively clean design that enhances air flow through the fins.

I prepared the Speeze BigRock™ by boring a hole completely through the base so I could epoxy a thermocouple above the CPU. The thermocouple is attached to an Omega HH23 Digital Thermometer. Ambient temps were measured with a thermocouple placed about 1 inch from the fan’s intake. I used Prime 95 to stress the CPU on an Iwill KK266, BD133 (MBM temps are on-die) and Abit KT7. Arctic Silver grease was used in all tests. CPU Case Temp is the temp at that point where the CPU contacts the heatsink, CPU Back Temps are measured by a thermocouple on the center back of the CPU.

In addition, the Speeze was tested on the Simulated CPU Die Tester at 101 watts. This is the “purest” test of a heatsink’s performance as extraneous factors, such as secondary heat path effects, are not included.

The simulated CPU die tester at a C/W of 0.33 brings it in at just about what AMD recommends for Socket A heatsinks – 0.32. The fan was metered to run at exactly 12 volts.

The on-board tests show better results (except for the PIII), probably due to the fan running faster than spec and good airflow through the heatsink, which cools secondary heatpath factors, such as capacitors. I have seen this consistently with the KK266+ and suspect that some motherboards are delivering higher voltage to the fan headers than others, resulting in better on-board performance.

As noise becomes more of an issue, heatsink designers are paying much more attention to copper and larger fans. As a “traditional” aluminum extrusion, this is something of an exception, except for its 70mm fan, which looks to be an effective solution for this unit.

The BigRock™ looks like a very attractive OEM type heatsink that system integrators may find very attractive, considering its price/performance ratio. I would expect to see this retail in the low $20s (which includes a tube of silver grease), and at that price it is a good buy. For users not aggressively pushing CPUs and on a budget, the BigRock™ is worth considering.

Speeze lists a C/W 0.52 – unfortunately, heatsink manufacturers listed C/Ws are all over the place. I visited a number of them while in Taiwan and found testing capabilities and methodologies vary widely, so results among them are not comparable.

¹Speeze is marketed by Spire Products, which is under Electronic Cooling Tech Corp., Ltd, located in Taiwan. The US distributor is JamiTech Corp.