SUMMARY: An inexpensive lighting source that’s as versatile as your imagination. 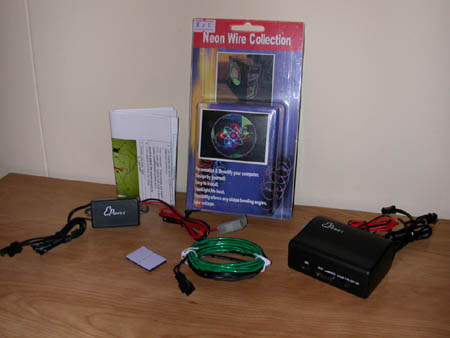 Sunbeam EL wire kits. Note, only one inverter comes per kit. Both types are pictured here for clarity.

The good guys at Directron
were nice enough to send over a pair of Sunbeam EL Cable kits for us to take a look at.

While EL (electroluminescent) wire isn’t anything new, it’s still a very popular item in the modding community because of the many ways it can be used.

What is EL wire? 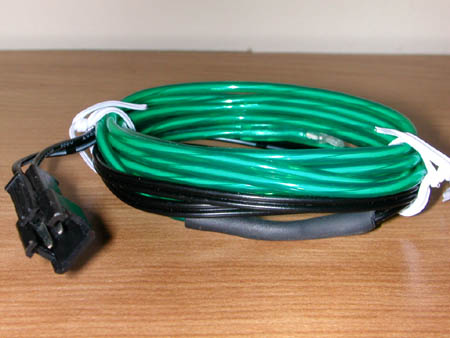 EL wire is an ingeniously simple device: In a nutshell, it’s a wire that lights up.

What causes it to light is the way it’s constructed. While at first glance,
it looks like a single wire, it’s really a pair of wires.

First there’s the center wire. It is a copper conductor, which is coated in phosphorus. Another, very fine wire (sometimes two),
is then wrapped around the phosphor coating. This is then coated in a plastic sheath. A second sheath is placed over the first, adding protection to the wire.

The phosphor coating is what makes the wire “glow”. It reacts to AC voltage, as it passes through the center conductor and the wire(s) wrapped around the phosphor. Color is added by
tinting the inner sheath. A DC to AC power inverter is required to convert the 12v DC current supplied by the power supply in your computer to the AC current needed to light the phosphor.
It takes about 100v AC to make the wire glow brightly.

If you look closely at the picture above, you can see the fine wire wrapping around the main conductor. Also note the heatshrink connection at the bottom of the coil. That very fine wire
is connected to the power lead with a solder joint inside that heatshrink. This soldered connection is quite fragile, so while you can bend the wire virtually to your hearts content, be gentle
with the connection, it’s a bit more delicate.

The Sunbeam kits I’m reviewing here come with everything needed to “plug and play”. There’s a choice of two kits, with the difference being the inverter included.

The “upscale” kit uses a different power inverter. Built into this model is a microphone, a sensitivity control and Sound/On/Off switch. These allows the EL wire to react to sound.
The rest of the kit is identical. 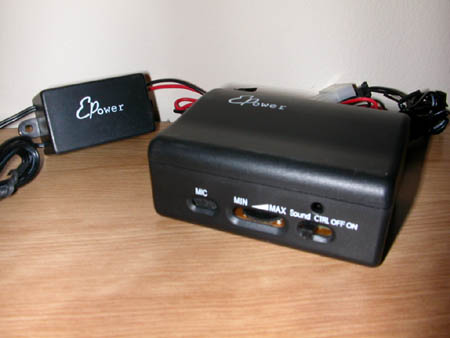 The two inverters. (Sound sensitive in front, basic model in the rear) 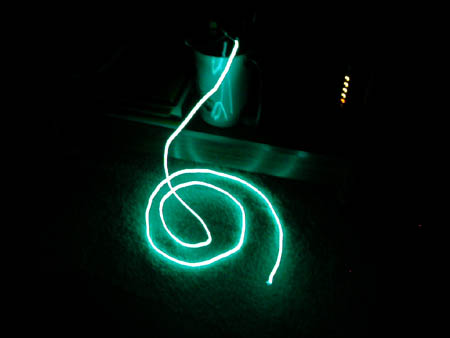 Not the best picture, but you get the idea

The beauty of EL wire is it’s versatility. Where it’s not rigid, like a cold cathode tube, you can bend it around corners, wrap it around things – pretty much
anything you can think of. I’ve seen these combined into rounded IDE cables. While I’m a bit leery of wrapping an electrical conductor around my data, it does look good.

The sound reactive model works as advertised and is fairly sensitive. When I first hooked it up, I put in a CD to see how well it responded to music. I figured
some old Metallica would work well, as that usually gets a response from the wife…. =)

I noticed it responds to air moving extremely well. The first place I put the inverter was in a breezy area of my case. This caused the wire to stay lit constantly rather than blink. Setting the inverter out of direct airflow on my hard drive turned the EL wire into a very large hard drive activity LED.

I noodled around with it a bit more and then tried my hand at a mod I’ve seen pictures of online several times, the old “Behind the Chieftec front bezel trick”.
I was writing a review of the bezel at the same time, so the timing was perfect.

I started out by taping one of the two wires (one from each kit) behind the lower half of the bezel:

…and the other behind the drive bay door.

Let’s turn off the lights on Page 3, and see what they look like….

The previous two pictures were from the backside of the panel…these two are from the front, as you’d normally view them.

As usual, pictures of lights don’t seem to convey what the eye sees. While the lower half picture (top pic above) looks about right, the door picture isn’t as bright as the wire is if it’s sitting in front of you.

These kits are really a lot of fun to work with and they’re very easy to install (just plug it in!). What I’ve done is just one idea. With some effort, these can light up your keyboard (take it apart and run the wire between rows of keys) – I’ve even heard of modding mice with them…all kinds of really interesting things can be done.

You’re only limited by your imagination.

And on that score…

Submit pics and a description of your EL Cable mod and the best one, judged by yours truly, will win a $50 Directron gift certificate. Entries must be received by NOVEMBER 22.

I’d like to thank Michael Chang at Directron for sending this our way.

Taking a page from the telco’s playbook, Time Warner starts to charge customers for bandwidth usage.

In the last couple weeks, I put up two political articles; one humorous, one serious. Two articles, one email. Almost zilch response. Which is perfectly fine, after all, this is overclockers.com, not politics.com. The last article had me saying a

Another One Bites The Dust