More light for your case – Brian

SUMMARY: A pair of products for detailing your PC’s abode

The good guys at Sunbeamtech and Logisys Computers were nice enough to send a
few items out for us to have a look at. Today we’ll look at a pair of them. 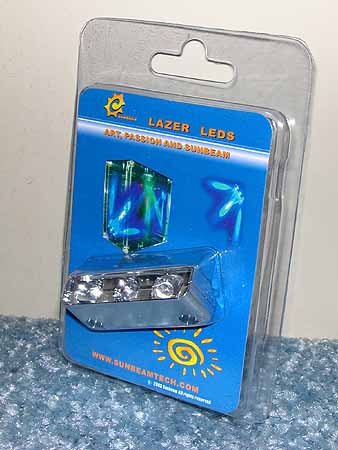 The first of the two items well look at is one of
Sunbeam’s
Lazer LEDs.
Sunbeam offers these in seven different color varieties;

The one they sent along was their blue version. 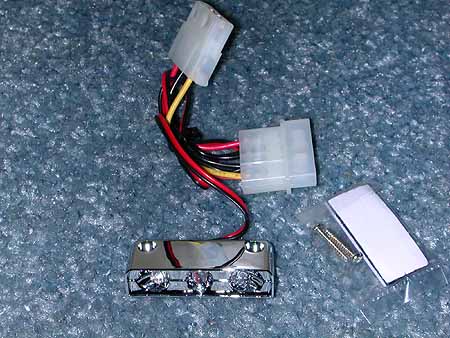 The item uses three extremely bright LEDs, mounted in a chromed plastic housing, with the bulbs angled at 45 degrees apart from each other. The attached harness, which
uses a pass through 4 pin Molex power connector arrangement, is about 12 inches long (30.5 cm). Also included is a small strip of double sided tape, and a pair of screws
for mounting purposes. 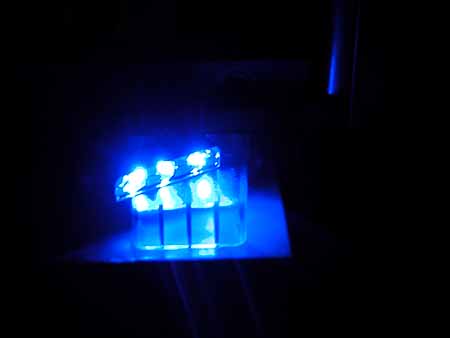 How bright is “extremely bright” you ask? Well, the following picture will give you an idea, but it’s still brighter than it appears here. The left side of the image was
taken with the flash of the camera on, the right side with it off; 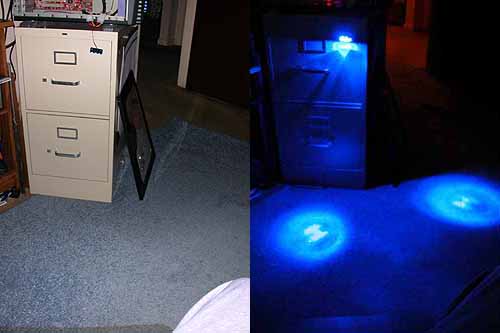 I was amazed at the amount of light this item produces. If the white version is as bright as the blue one is, it’s likely brighter than any flashlight you’ve ever owned.

The really neat thing about this item is that, while it casts a tremendous amount of light, it has a very small “footprint”, meaning you can mount it virtually anywhere inside
your case. And with a full foot of wire lead to plug it in, you should have no trouble being able to get power to it.

It also puts out little to no heat, which is another plus. Your case temperatures will not be effected by using this, even if you run your PC full time 24/7. And you don’t have to worry about
mounting it too close to something plastic, and melting it (the Lazer LED casing is plastic, so if it was going to heat up enough to worry about, they would have used a different
material in it’s construction).

All in all, a very versatile lighting component. While LEDs aren’t anything new in the lighting or modding community, Sunbeam has put together a fine product here

The other item we’ll look at today is a
Sunbeam
3D UV Fan Grill. 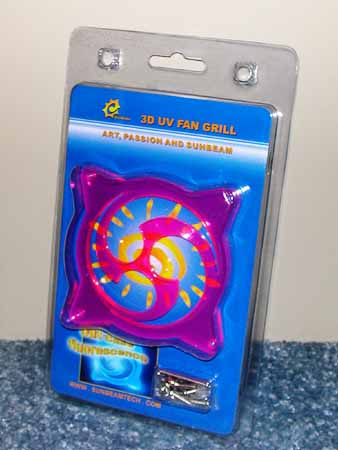 Sunbeam currently offers these grills in three different styles, and three different colors of each, for a total of nine individual choices. The three designs are called “Blade”, “Empire”, and “X”, and each is available in UV blue, UV green,
and UV red.

They are sized to be used with an standard 80mm case fan, and come with a small bag of hardware (two sets of four screws in different lengths, and four nuts) for mounting purposes. 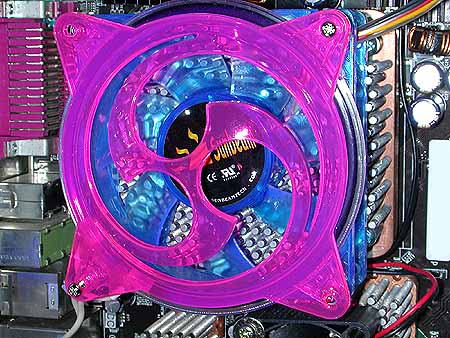 “Some assembly required, UV fan not included…” (boy does that sound cliche…lol)

I had a chance to review
Sunbeam’s UV fan
recently, and that is the fan pictured with the grill here. The two items work quite well together; 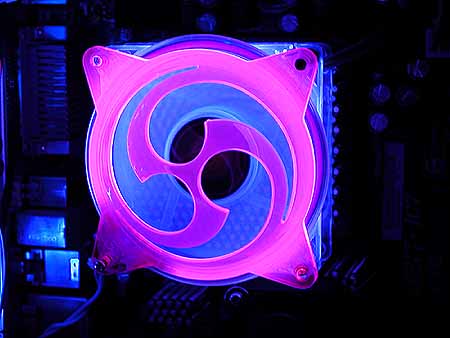 The red and the blue contrast nicely with each other, whereas a blue grill on a blue fan would be difficult to distinguish them as separate.

The fan grill itself doesn’t restrict airflow much. My CPU temperature when using this grill went up about 1 degree celsius while I has this installed (versus no grill at all). Not
enough to really be concerned with. Mounting this on a side panel in a blowhole likely wouldn’t effect case temperatures at all.

I’ve had the fortune to be able to review several items in Sunbeam’s growing inventory of products, and they continue to impress me. I’ve got a pair more here waiting for next time, and
those items are very nice too.

These two items here, while not the most exciting in the genre of computer modding, are still great detail items, for adding that ‘finishing touch” to an ensemble of coordinated items.

I’d like to thank Sunbeam and Logisys Computers for sending these out to us.

Out of the Loop?

With Microsoft’s new operating system out, are you looking to build a new machine, but aren’t caught up on what has changed over the last few years? Here are my opinions regarding current trends in PC building for those getting back into the game.

This is what one senior congressman is proposing to do about P2Ping. The mere act of making a copyrighted file available could get you up to five years. The number of the bill is H.R. 2752, and it’s called the

Low Speed, Continued In its response to rumors of further delays, AMD pretty much confirmed that, but said that it was going to put out only low-speed tri-cores and even lower-speed Phenoms because OEMs wanted it that way. ROTFLMAO. Moving