A while back I bought a Sunbeam Rheobus fan controller. It is quite a nice little unit, designed as a linear controller so there are no secondary noise issues like PWM (Pulse Width Modulation) controllers tend to have. It’s 20 watt power limit was ideal for my water cooling system’s radiator fan, one of the Delta FFB1212VHE 150 cfm monsters. The Sunbeam also has a 0-12 volt dial range and a quad set of dual color blue/red LEDs.

While the fan controller works perfectly, I ran into the issue of LED brightness.

Some other people in forums and site reviews have also noted how bright the LEDs are. In a dark room they will shine light on the opposite wall and make it very easy to find your way around, better than most night lights. They are insanely bright and extremely power efficient, in the range of one hundred milliamps or less.

So, the mad scientist father/son duo set out again to figure out how to make these more tolerable so as not to be blinding.

After poking around with a voltmeter and figuring out the trace paths, we found that when looking from the back of the controller, the left pin on the LED is for 0-7 volt color, the right one if for 7-12 volt, and the middle is ground. So in order to alter the brightness, all that needs to be done is to wire a resistor on the ground pin in series: 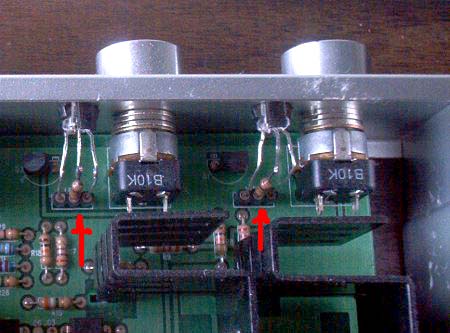 It is easiest to cut the ground lead to a certain length, then solder the resistor in place with one end sitting in the socket and the other held to the ground lead on the LED.

We tried varying resistances and found that the brightness follows a near exponential curve with regard to power.

A 5K ohm resistor would yield brightness about ½ the original, or around 4x a standard case LED. We finally settled on a 10K resistor, which is about 2x the brightness of a standard LED and puts out much less light into the room. The power input dropped to the single digit milliamp range as well.

A more elegant mod is to wire a 10K or 5K potentiometer into the ground pin to vary the brightness to preference without re-soldering a few times. 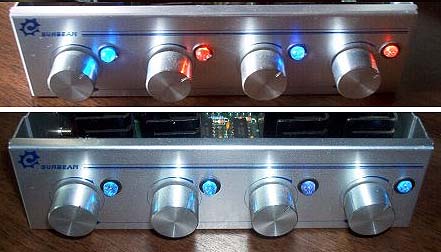 If so desired, the LEDs can be taken out and the leads bent the opposite way – then the colors will be reversed when the channel is turned on, i.e. blue for 0-7 volts and red for 7-12 volts. I did this as I run my fans in the 3-7 volt range and prefer the blue lights to the reds.

The final result gave me a controller that will not blind me nor light up my entire room as I try to sleep, as my machine is on 24/7 running Folding (Go Team 32 Overclockers!). I hope this guide is helpful to those who wanted to know how to change the brightness of their Sunbeam controller without putting tape over the top of the LEDs or simply unplugging them.

In a few months, I’ll have to get somebody a notebook for someone. Indeed, I feel a bit of desire to get one myself sooner than that. So I started looking, but before I did, I set some criteria for Read More

SUMMARY: A preview of four very different heatsinks from Global WIN. The good guys at Global WIN sent me a handful of heatsinks to test out – I thought you’d like a preview of what’s in the hopper. These are Read More