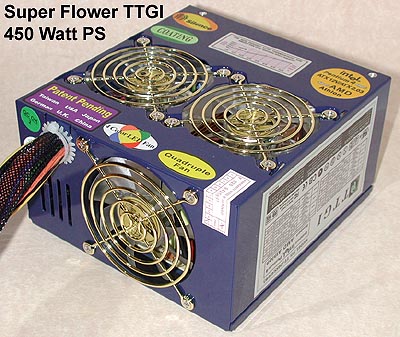 The good guys at Directron were nice enough to send us a sample of the Super Flower TTGI 450w PS #SF-450TS. This is another four fan unit which comes red, black, blue or gold; the fans can be varied from Full On, Middle or Temperature Controlled. The noise difference is considerable – four fans blasting away creates a racket.

The four fans are located front, rear and two on the top. The rear exhaust fan features four LEDs: 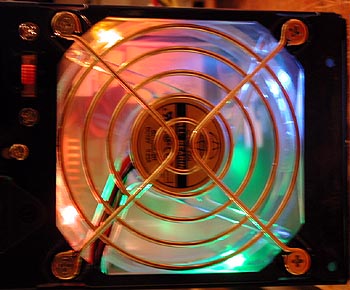 There is a three position switch located at the rear of the PS to control fan speeds. All four fans (double ball bearings) are speed controlled by this switch, which features settings for A Auto, T Turbo, and M Middle.

The Turbo setting is all the fans full blast, Middle sets the fans at one speed in-between Turbo and Auto, and Auto lets the temp controller do its thing. When first starting up, Turbo is the loudest by far, followed by Middle with Auto the lowest – barely discernible from three feet away. Depending on how hot your case and the PS becomes (a function of the load), the Auto setting may or may not give the lowest noise.

Opening the PS (NOTE: VOIDS your warranty and dangerous!) 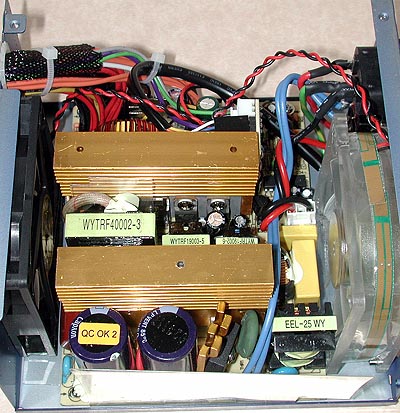 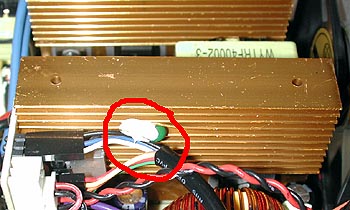 is the thermistor, used to monitor temps and control fan speeds in Auto, which is glued to one of the heatsinks.

I measured fan noise with a Radio Shack sound meter three feet from the rear of the PS (free standing – not in a case); at Turbo it measured 57 dBA, at Middle 51 dBA, and at Auto, the reading was less than 50 dBA – very quiet (Note: Room temp at startup was 16 C).

I can’t conceive of anyone buying this unit except to use it mostly in Auto (temp controlled) mode. The following graph shows fan rpms vs temps:

I think the effective range is most likely from about 20 C to 50 C. If the PS temp is passing 50 C, either it’s really under-powered relative to your PC or your case is on fire.

To check out fan speeds and temps, I tried the Super Flower on Auto with an Acorp 4S845A motherboard. I inserted a thermocouple in the same location as the thermistor inside the power supply to measure temps controlling the fans. After running Prime 95 for about 30 minutes, it was still ticking away with low noise – the thermocouple read 23.1 C, fan intake air 15.9 C and fan exit air 18.9 C. Switching to other speeds resulted in higher fan speeds:

Hmmm… not much relationship to the graph on the PS. Reading off the graph, fans at Auto should be spinning at about 1200 rpm – both the 70 and 80 mm fans were 5-700 rpm beyond that.

Brett Wasserman is in the process of developing a Power Supply Test Bed, so detail testing (voltages, line noise, etc) will be posted soon.

I think the fourth fan is a bit of overkill, although I really like the way it opens up the PS interior to air flow. If I were to hack it, I think I’d wire a rheostat to the 70mm fans to slow them down to something like 1000 rpm and leave the two 80mms alone; this should move air over the heatsinks and keep noise even lower at Auto. A quiet 120mm fan rather than two 70s might be a better way to go.

Brett will do detail testing, but at first glance, Super Flower TTGI looks like a good low-noise choice.

Thanks again to Directron for sending this our way.

As long as “shooter” games have been around, I have been playing them. I’ll never forget the day I got my first real sound card and sub woofer/satellite setup. Once again, I was aghast at what marvels technology could conjure