SUMMARY: A head-to-head test of the best Socket A heatsinks.

AMD’s Socket A CPUs pump out a LOT of heat. As a result, heatsinks have become much more efficient – we’re now seeing C/Ws of 0.3 and below from the most recent ones on the market. What follows is a definitive test of five heatsink which use 60mm fans – four of which are available now and one (T40-4) which is not yet in the US market. 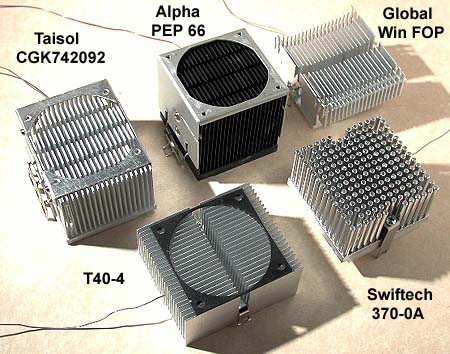 The wires you see on each heatsink are the thermocouples used to measure temps.

To normalize testing, I mounted each heatsink with a Papst 33 cfm fan; I feel this is the best compromise between performance and noise. Some of the heatsinks tested ship with puny 60 x 15 mm fans, but that’s not what this test is about. 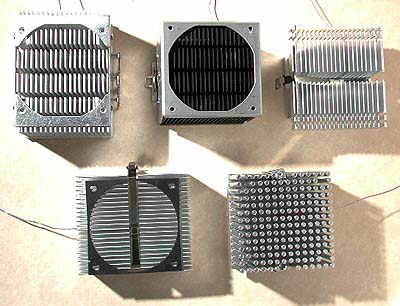 The heatsinks covered on this test are quite diverse; The Taisol and Alpha are forged, the T40-4 and FOP are extruded, and the Swiftech sports round pins inserted into its base. All are aluminum except for the Alpha, which has a copper insert in its base. Also note that the Alpha’s shroud is rotated 90 degrees which enables it to fit on the KT7; the fan is blowing down into the heatsink.

Looking at them head-on, you can also see that they are roughly the same size overall except for the FOP. One of the determining characteristics of heatsink performance is fin area, which is determined by fin height and density. I counted the fine densities of each heatsink as follows:

Hmm…see a trend here? Extruded designs max out at about 10-12 fins per inch. Any denser and you start to have problems getting sir through them. Forgings may give you more, but the problem of getting airflow through the heatsink practically limits density. The Swiftech is different due to its rounded pin construction.

Another way to compare different heatsinks is to calculate the total space they occupy, with the following results:

Assuming these heatsinks are equally efficient, we should see cooling performance mirror the volume rankings. On to the test:

A hole was drilled into each heatsink’s base above the CPU’s core and a thermocouple was epoxied inside the hole. Temps were measured with the Omega HH23 Digital Thermometer. Ambient temps were measured with a thermocouple placed about 1 inch from the fan’s intake. I used Prime 95 to stress the CPU on an ABIT KT7, running a Duron 800 @ 1000, 1.9v, radiating 52.6 watts, Arctic Silver grease.

The surprise is the T40-4; I would have expected it to rank about in the middle of this grouping, but it performs better than expected. However, with this exception, the rest fall pretty much where expected. The venerable Alpha still holds its own even though the design has been around for some time. I think it attests to the “headroom” we’ve seen with Alphas.

Any Socket A heatsink with a C/W of 0.3 or less is going to give you good cooling. I would not recommend any heatsink that tests above 0.3 C/W. To date, the absolute best Socket A heatsink, the Swiftech 462-A which I tested HERE, yielded C/Ws less than 0.2.

In general, if you’re considering a different heatsink, calculate its cubic volume without the fan. Anything less than 10 cubic inches may not do the job. Avoid, at all costs, any heatsink that uses a puny 60 x 15 mm fan – you’re just going to change it anyway if you want superior performance.

From Air to Water – Lessons Learned

SUMMARY: The fuel pump I bought uses a pulsating flow which shakes everything – Not Acceptable for CPU cooling. I have received a number of emails asking about using a fuel pump for water cooling, so I bought one to