Today, Swiftech announced the release of the H220 successor, the H220-X. The unit features Swiftech’s flagship Apogee XL waterblock and a pump that is integrated into the 240 mm radiator. We have a review sample headed our way, so stay tuned for that!

Here is the press release we received today. 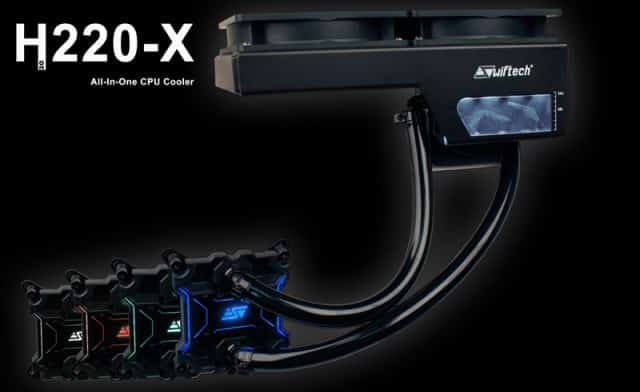 The patent pending H220-X liquid cooling system is Swiftech’s next generation all-in-one CPU cooler featuring a dual 120mm copper radiator coupled to an enthusiast grade pump and water-block. As in previous Swiftech® offerings, the product remains entirely focused on low to inaudible operating noise with extreme thermal performance, and it is engineered to appeal to the broadest possible spectrum of performance oriented users ranging from casual to hard-core enthusiasts. For casual users, the kit is shipped factory pre-filled, ready for plug-and-play installation, and it is maintenance free during its three year warranty period. For enthusiast users, the kit can be fully customized thanks to easily replaceable tubing and fittings, and its powerful pump can easily support additional components such as graphics cards and/or extra radiator(s).

The H220-X leverages Swiftech’s patent pending technology initially developed for the MCR-X20 Drive series of radiators, in which the pump is fully integrated into the radiator instead of being built into the waterblock. It features a compact dual 120mm copper and brass radiator, a built-in backlit reservoir with visible coolant level, and Swiftech’s recently released flagship Apogee™ XL waterblock for extreme cooling performance.

Gabriel Rouchon, Swiftech’s chairman and CEO declared: “Our patent pending technology is the result of years of development and it clearly demonstrates Swiftech’s ability to think outside the box. The H220-X CPU cooling kit embodies everything we stand for at Swiftech®: innovation, performance, quality, and most importantly an unwavering dedication to our customers. I also want to take this opportunity to thank the entire staff at Swiftech for the passion and perseverance that have led us to this moment. Development of the H220-X has allowed us to implement several key enhancements to the pump that is also at the heart of the original H220 kit, and the H220 will continue to be marketed in regions where intellectual property rights are not disputed; in the end, both H220 and H220-X have greatly benefited from these efforts, and I look forward to see them fill different market niches based on users tastes and preferences”.

Once our sample arrives, we’ll be sure and get our review up as quickly as possible!

At last count there are no less than 20 choices to be had within the ASUS Z77 lineup. You can find many offerings in the same price range that differ only by the features included on them. Today we’ll’ be looking at one such mid-level offering, the P8Z77-V LE PLUS. So. let’s have a look at what ASUS has packed into this Z77 offering!

For well over a year now, the Silverstone Raven RV04 has been in the works and it’s finally becoming available for purchase. The slogan “Redefine Tradition” has been affixed to the RV04 in an attempt to highlight the thought process behind this uniquely designed full-tower case. From the 90-degree motherboard mounting to the slightly smaller size than the previous Raven cases, Silverstone hopes to impress with this latest addition to the Raven family. Let’s see how they did!

Looking to enhance the design and attract serious gamers and enthusiasts alike, the Ostrog has had a makeover. This time around the looks are much more aggressive and plenty of additional features have been added to the fold. Today’s review will be on the Ostrog GT, which is at the upper end of the ECA3280 series of cases. So, let’s have an up close look at this new chassis offering from Enermax and find out if it is a serious player in the crowded mid-tower case market.