CELERON SUMMARY 10/11/00: The Swiftech MC370-3 (now MC371-3) is a very effective “off-the-shelf” peltier heatsink which can drop temps to below freezing at idle and into the 50s under stress at high overclocked speeds.

Earlier I tested the air-cooled MC370-3 with a Duron (see below) with favorable results. Next I then tested it using a Celeron 533A on an Iwill Pro VD133 motherboard to see what it would do with Intel’s power misers. A priori, you would expect more cooling and performance gains compared to what we found on the power greedy Duron.

The Iwill VD133 Pro monitors temps with a thermistor in the CPU socket; this measures the back of the CPU carrier, not the CPU itself. I figured CPU temps would be somewhat lower, so I checked temps on an Iwill W02-R which gives thermal diode temps. Running the Celeron 533A at 880, temps of -5C/23F at idle and 12C/54F under Prime95 were recorded by MBM 417. You might want to factor in these temps as you view the results below:

Positively Arctic compared to what I saw with the Duron! Not unexpected – the Duron gushes out 49 watts at 969 MHz while the Celeron ekes out 22 watts at 896 MHz. An aggressive cooling solution like the MC370 is going to yield more performance gains, and in fact the Duron overclocked 49% (969/650) compared to the Celeron’s 68% (896/533) gain.

This CPU has never seen a stable 896 MHz, so the gain I received with Swiftech’s MC370-3 is impressive. I almost got into W98SE at 920 MHz, but it froze on the splash screen – still something I was not able to do with air or water cooling. The best I could do with this CPU is about 820 MHz with water, so I gained about 80 MHz. For whatever reason, I could not get the Iwill to boost voltage by more than 5% with this CPU, so I can only speculate that another 5% voltage might have broken the 900 barrier. Impressive!

Aggressive cooling of Intel’s Coppermine CPUs seems to me a more feasible approach than for AMD’s Socket A CPUs.

I should also note that I did not completely seal the CPU against condensation per Swiftech’s instructions. I use these boards for different tests, so sealing was not an option. I did find some condensation with the Celeron due to this and would caution that proper sealing is not an option – it is a MUST-DO! Results may be improved with sealing – sure can’t hurt.

DURON SUMMARY 10/8/00: The MC370-3 (now MC371-3) is a very effective “off-the-shelf” peltier heatsink which reduces temps something like 10C/18F compared to water cooling, probably double that for air. 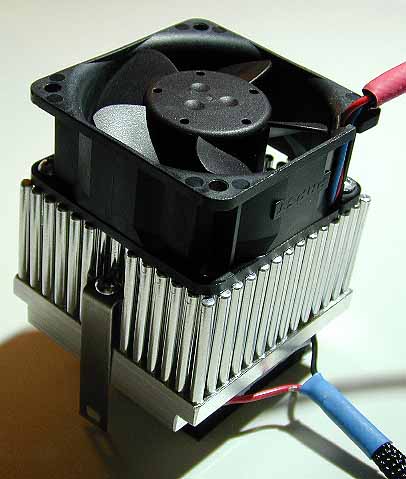 Swiftech was nice enough to send over one of their MC370-3 Air-Cooled Peltier Heatsinks for us to try out. As shown above, this is an aluminum pin-fin heatsink, copper base, topped with a Papst 33 cfm fan. 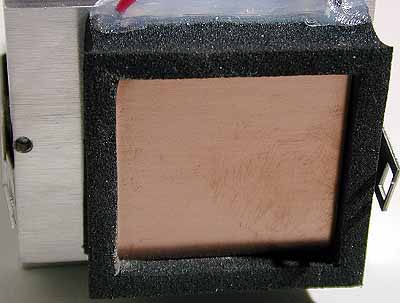 The copper base is quite thick – 1/4″/6.25mm. This effectively moderates temps so that you will not see wide swings between idle and loaded CPU temps. Swiftech uses Arctic Silver as grease on all surfaces.

Swiftech’s package includes very comprehensive, clear instructions, neoprene pads for the motherboard’s back and the socket’s inside, and pads to use balance the heatsink on a Coppermine.

The clip requires some care in its use. The instructions are quite specific on how to mount the heatsink on a motherboard, and I absolutely recommend that you remove the mobo to install the Swiftech unit. The clip tightens to the socket by turning the bolt counterclockwise – UNSCREWING the bolt tightens it to the socket lug. This is counterintuitive but, if you look at the heatsink, you will quickly understand how it works.

Here’s what I did:

OK – what’s tight mean? No way I can communicate this, but if you are grabbing the screwdriver with your whole hand and bearing down, either the lug or CPU will go. I use three fingers to tighten it. Now hook up the leads and you’re all set to go.

I used the ASUS A7V as the test platform with a Duron 650. Temps were measured with the ASUS’s probe placed next to the CPU’s die. I measured the heatsink’s temp by placing a probe between the clip and the base. I also used both a 230 watt external 12 volt power supply for the 78 watt peltier and a Radio Shack 13.8 volt unit.

Of particular interest are the 13.8 volt results: More heat, no performance increase. Note also that replacing the Papst 33 cfm fan with a Delta 38 cfm fan made no appreciable difference. The peltier is throwing off a LOT of heat, and the heatsink is absorbing about as much as it can.

I would caution anyone considering air-cooled peltiers to first determine how effectively your case is dumping heat.

If your current case temp is more than 5C/9F over ambient, adding a peltier is going to increase case temps to levels that will compromise the peltier’s performance.

With this particular CPU on the ASUS, I max out at 935 MHz water cooled, temp averages about 42C/108F. Here the air-cooled peltier gives me about another 35 MHz.

After I dismounted the Swiftech unit, I took pics of the grease pattern on the copper plate and CPU die. This even pattern indicates that the clip was torqued down such that pressure was equal on both sides. If you see more grease on one side, then the pressures are unbalanced and performance is adversely affected.

If you are getting a stable 900-950 MHz with your Duron, then I doubt that a peltier solution is going to get you much more. Cooler – yes. I saw this same pattern with supercooling the Duron; a lot of effort for very little gain.

If you have an AMD socket A CPU running at about 40C/104F, active cooling may get you another 50 MHz. However, if you are air cooling in the 50C/122F range and have trouble getting 900, then this is one solution worth pursuing. Overclocking the Duron to it’s maximum is going to significantly increase the heat it generates and the MC371 can lower temps that may extend the life of the processor.

No question you can get better performance and lower temps, but whether the increase is cost-effective is up to each individual.

Many thanks to Gabe at Swiftech for sending us this unit to test out.