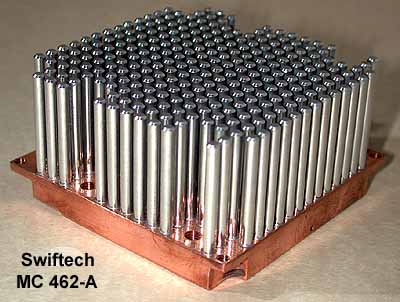 Swiftech was kind enough to send us a sample of their latest MC462-A. The differences between the original MC 462-A and this version fall into three areas:

Of the mods, the last two have no real impact on performance compared to the new fan.

The fan is the biggest change between the two versions; the earlier fan was a Delta 68 cfm with fan noise at full speed rated at 48.5 dBA. This latest version features a Sanyo-Denki #109P0812A201 rated at 53 cfm, 45 dBA, 4600 rpm, 0.56 amp. Swiftech provides a four pin hard drive connector for power and a separate yellow 3 pin molex connector so that you can read rpms – great for those motherboards that require a spinning fan to boot up.

The base of this latest revision is notched to accommodate those motherboards’ capacitors which violate AMD’s clear zone: 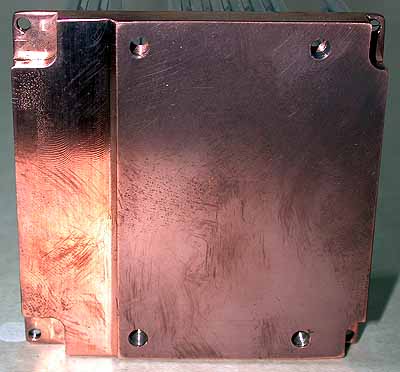 Swiftech has paid a lot of attention to mounting their heatsinks on motherboards. This is one of the best around – just about foolproof. Pictured below is one of the bolts that secures the heatsink to the board.

There is a washer that isolates the chrome piece from the top of the motherboard. The round chrome piece is threaded to accept the spring loaded bolt. You screw this bolt into the chrome fitting until it hits bottom; at this point, the spring places the right load on the CPU per AMD’s spec.

I bored a hole through the copper base so I could epoxy a thermocouple above the CPU. The thermocouple is attached to an Omega HH23 Digital Thermometer. Ambient temps were measured with a thermocouple placed about 1 inch from the fan’s intake. I used Prime 95 to stress the CPU on an Iwill KK266, running a T-Bird 1133 @ 1330, 1.85 v (82.7 watts). I measured noise 8 inches from the fan’s intake with a Radio Shack Sound Meter. Arctic Silver grease was used in all tests.

The performance difference with the relatively quieter fan is minimal while the noise level is noticeably quieter; 63 dBA is a couple of dBA higher than what I get with a YS Tech 26 cfm fan. There is no high-pitched whine such as you hear with fans rotating at very high cfms, like the Delta 38 60mm unit. All told, a good compromise between performance and noise.

The Swiftech MC 462-A continues to lead the air-cooled performance race, now with noise somewhat tamed with the Sanyo fan. The mounting system is superb and about as goof-proof as you can get, although you must take the motherboard out of the case to set it up. The is still the “Heatsink to Beat”.

An aluminum extrusion with an 80mm fan – an OK but not great cooler. — Joe
Read More