Recently I wrote about Swiftech’s MCW80 and here I’ll detail how I was cooling the water for all of the card testing in that article.  First, we’ll cover some basics. Everyone knows a swiftech block works better with a Swiftech radiator so I chose an MCR220-QP. I’m taking some creative license with that statement, but it’s all in good fun. The fact is that while this radiator is not Swiftech’s top-of-the-line model, the MCR220-QP’s two-pass/single row configuration is still capable of cooling even the most volcanic graphics card, including the NVIDIA GTX 480. In fact, it was handling the GTX 480 GPU as well as a 980X CPU overclocked well past stock.

The radiator is black and shiny, but under that paint is full brass contruction. Why brass and not copper? Copper is better for cooling – or so I’ve heard. The reason that brass is used is pretty simple: brass has more strength due to it’s alloy chacteristics. Copper, even when alloyed in common forms like C110, is a softer material compared to brass. This strength is important in a radiator due to its construction (thin walled tubing) which would be too easily damaged or broken if made from copper. 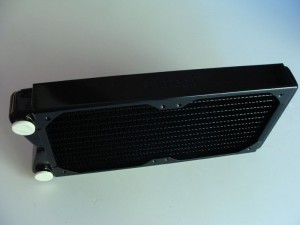 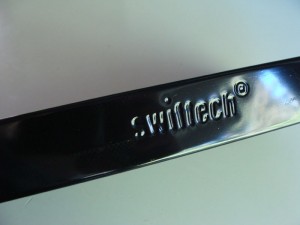 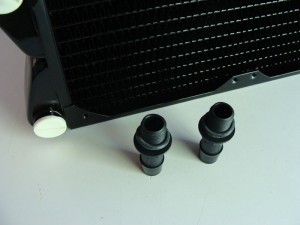 The MCR220 series ── there are two other versions currently available, one with an internal reservoir and the new ‘stackable’ ── also feature:

To complete this radiator setup I used Technofront’s Air Box 240. Ducting airflow from fans is nothing new…it’s effectiveness is well established. Along the same lines the Technofront Air Box is a simple plastic device which builds a ‘box’, extending the fans away from the radiator by 45mm. This has the effect of eliminating ‘dead spots’ in the air blowing thru the radiator. It also decreases lost air flow, and contributes to more effective cooling. 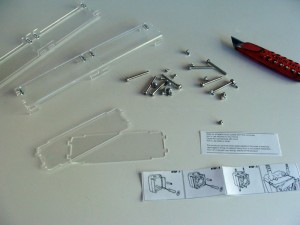 Assembly is fairly straightforward, the two longer plastic sides are screwed onto the radiator, then the two shorter end pieces are snapped into place. 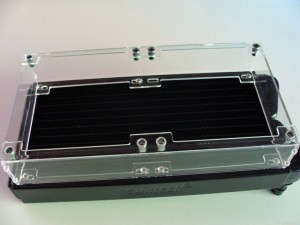 It did help having a very slim, long phillips head screw-driver that fit thru the upper mouting holes, otherwise you have to work at an angle to get to the side panel mounting screws. 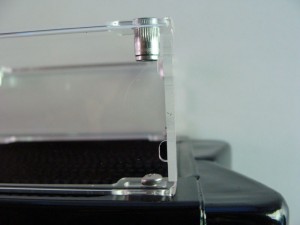 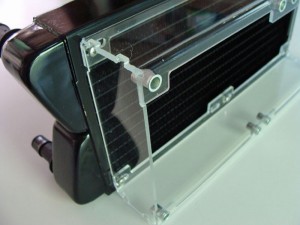 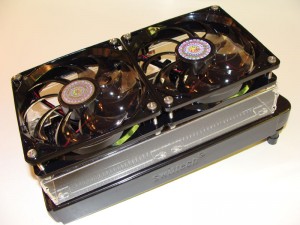 So how does it all perform? Again I will refer you to the article I linked earlier but basically, I threw out the old setup I was using and don’t miss it one bit.