Swiftech made a major change to the MCW370 which resulted in significantly enhanced performance: The copper coldplate, originally about as thick as a matchbook cover, was replaced with one 1/4″ thick. (NOTE: Swiftech upgraded all earlier blocks to the new design free of charge.) That and using Arctic Silver resulted in CPU temps about 20C/36F lower compared to air cooling.

First I tested the MCW370 without the peltier to assess its performance as an aluminum waterblock. I have found consistently that aluminum blocks under perform similar copper designs by about 3-5C (5-9F). The one exception was the Tidal Pool block – a radically different design compared to “drill and plug” blocks – which performed on par or about 1C/2F less than copper blocks. Results:

About what I would expect, so no real surprise here.

Next I added the peltier, 1/4″ coldplate and foam gasket to the MCW370. The test setup included using a RadioShack 13.8 volt power supply to independently power the peltier, a Senfu radiator modified to take 3/8″ tubing and a Danner 1.5 submersible pump.

This CPU could not do much over 930 reliably, so hitting a stable 978 MHz was a real gain. Hitting one GHz still proved elusive (see how I finally did make 1 GHz HERE), although I could boot up but not make it into Windows.

Cooling AMD’s hotplates is about as tough a real world test as you’re going to get. Swiftech’s MCW370 with peltier did a good job of it. The MCW370 is the only “off-the-shelf” waterblock/peltier combo I have tested for socketed CPUs that, installed correctly, is almost foolproof.

Running the peltier at 13.8 volts improved temps by 3C/5F compared to an AT 230 watt power supply at 12 volts. The Celeron is pumping out about 21 watts of heat, a far cry from my Duron’s 46 watts (see below).

The Celeron results are more in keeping with what we are used to seeing; I think boosting VCore another 5% might get me to at least 880 MHz and maybe to 900.

The MCW370 looks like a solid product with real cooling potential for Intel’s socketed CPUs; silver grease (on the way) is claimed to boost performance by something like 3-5C which might improve results. Swiftech’s quality and customer service has been consistently very good.

Swiftech produces some of the finest cooling products around and the MCW370 is no exception. Particularly noteworthy are the block’s nipples – these are really exceptional. 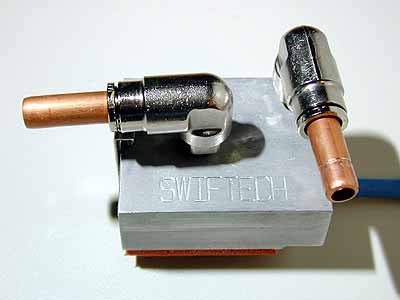 As the picture shows, I inserted two small 3/8″ copper tubes into them so that I could attach 3/8″ plastic tubing to the block. What’s great is that all you have to do is insert them into the nipple – it literally grabs onto the tubing and you have a water-tight fit. Simple, easy and effective.

As the next pic shows, what’s even better is that the nipples swivel 360 degrees! I don’t mean you you set it to where you want and tighten them down – I mean, they swivel under load and do not leak. This is really a great feature for placing the block in any configuration you want. 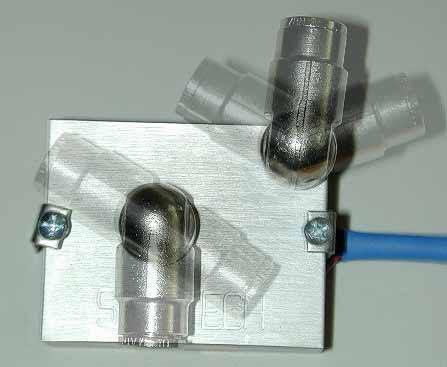 We all know that fastening waterblocks onto sockets has sometimes lead to all kinds of grief. The MCW370 uses a screw-adjustable clip that is very simple to install – a small philipps-head screwdriver is all that’s needed. If I had to quibble, I would prefer to see a little more cushioning where the clip attaches to the socket – more bearing area should place less stress on the socket lug. However, unless you use extraordinary force, this should not be an issue.

Personally, I’d also like to see clips which take advantage of the socket A’s three lugs; spreading the required force over three lugs is more comforting to me than relying on one lug (note however that this is not the case for socket 370s). Maybe Swiftech could offer this as a socket A option (hint). 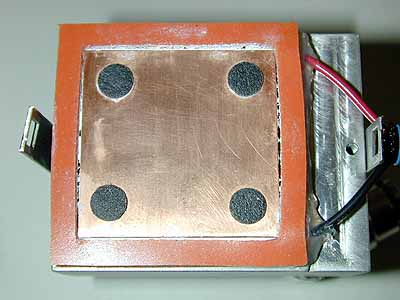 This last pic shows the four foam pads on the copper coldplate that are intended to keep is on an even keel when used with a Coppermine; remove them for an AMD socket A CPU.

Correct mounting of the MCW370 to the CPU is critical to performance!

In my haste to try it out, I did not read the enclosed instructions (BAD!). The instructions are quite detailed and should be read before doing anything. By equally tightening the mounting screws, you will mis align the waterblock on the CPU with degraded performance. I recorded temps of about 45C/113F this way. A quick call to Swiftech straightened me out.

Shown above is the CORRECT way to align the waterblock to the CPU. After preliminary tightening, I used an index card to mark the left hand screw (the one closest to the CPU) and then adjusted the right screw to match its height. Doing this in a case may be tight, but it looks doable. A caliper might be a better tool for this situation.

All this assumes, of course, perfect transfer of heat between the heat source and the peltier; considering there will be losses due to inefficient thermal transfer at each interface, the effective cooling power will be somewhat less. For this test, I purchased a RadioShack 10 amp, 13.8 volt power supply ($100) and also used a 230 watt AT power supply to independently power the peltier. My results:

(I should note here that I am using high-quality thermal grease from AOC; silver grease seems to perform much better and I will get some to test out with this setup; results could be 3-5C better.)

Good cooling at 13.8 volts, less so at 12 volts; no performance gains compared to straight watercooling. At this speed and voltage, the Duron is radiating 46 watts; a Coppermine at the same settings – 30 watts. The “typical” operating range (per Swiftech specs) for this peltier is 18-38 watts.

I was not able to run this CPU any faster with the MCW370 than with straight watercooling. However, I think this may be more a characteristic of AMD’s CPUs; similar cooling on a Coppermine usually results in significant performance gains.

Note also that using a 10 amp, 13.8 volt power supply resulted in about 8% better cooling (with 15% more voltage) under load. A lot of us are using AT power supplies on peltiers, so expect to lose something like 10% cooling power (assuming the peltier is rated at 13.8 volts). If you are using your system’s power supply on a peltier, expect to lose at least 10%; more loss is possible if the power supply is running close to its limit.

I have been experimenting with peltiers on the Duron and T-Bird with similar results. IMHO, it will take a 2-peltier setup to supercool an overclocked AMD CPU. (Assuming you use a 12-14 volt peltier.) With something like the ASUS A7V, there is enough real estate on the board to fit something that will take 2 peltiers. What I can’t tell you right now is if super-cooling an AMD CPU will get you significantly better performance. I’d like to hear from anyone trying this.

Swiftech’s MCW370 is one of the best waterblocks around – an “off-the-shelf” solution that is extremely well crafted and versatile. Mounting is super critical – although the design of the block does not permit it, a clip with a tightening bolt centered over the CPU would be a much better solution.

The MCW370 is a fine solution for Coppermines (I will test this out soon), but whether AMD’s hot-plates can really take advantage of this cooling is an open question. I’d like to hear from anyone super-cooling an AMD CPU – is it worth it?

An Evaluation of the ThermoChill Radiators

Bill Adams’ testing with conclusions for all radiators.
Read More