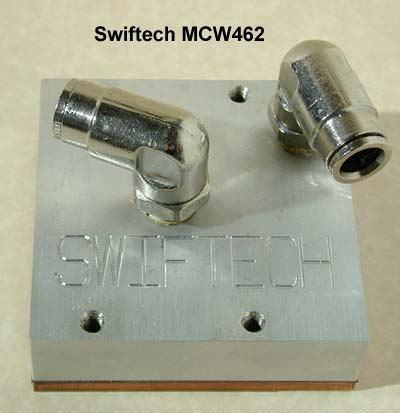 Swiftech was kind enough to send us a sample of their latest waterblock, the MCW462.

The MCW462 is the first one I have seen which uses the four mounting holes around the socket. The mounting system is quite effective: Four bolts secure the waterblock onto the CPU using brass standoffs in the four holes around the socket. The bolts carry springs which hold the waterblock in place with the right pressure – no adjustments or possibility of snapping off socket lugs by applying too much pressure. Simple – effective – elegant. 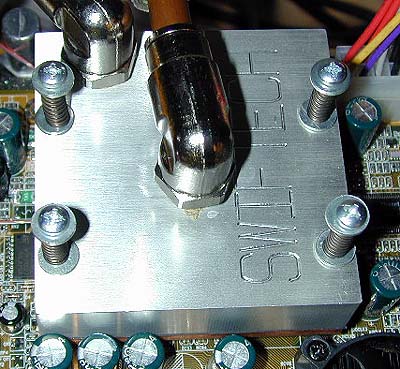 Swiftech recommends applying some super glue on the nuts holding the standoffs to the motherboard – I would strongly recommend doing so; if you don’t and you unscrew the bolts, the nuts may come off. 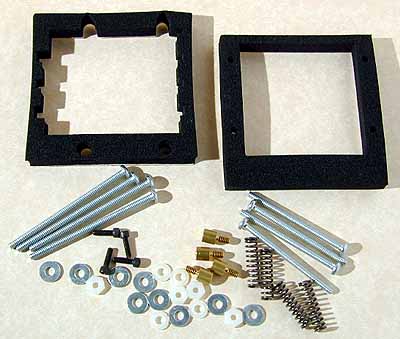 These parts include gaskets for mounting a peltier.

Its size is much larger than other socket waterblocks – the MCW462 measures 3″/75mm square compared to the typical 2″/50mm square of others. This more than doubles cooling surface area. 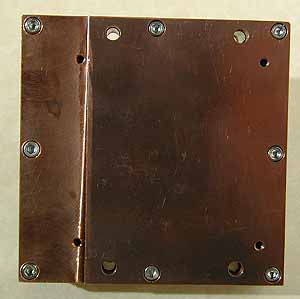 The copper base measuring 3″/75mm square.

In addition, as in earlier designs, the MCW462 sports swivel nipples which gives maximum flexibility in hose locations. All told, a very nice package.

I spent some time considering how to test waterblocks with thermocouples. For air cooled heatsinks, I drill a small hole in the heatsink’s base so that the thermocouple is positioned on top of the CPU. Drilling holes in waterblocks the same way has obvious disadvantages.

What I decided to do was adapt the standard AMD uses for heatsink certification; I drilled a small, long hole in the side of the copper plate so that I could insert and epoxy the thermocouple into the copper base. The hole was drilled such that the end of the thermocouple was located above the CPU’s center. This enables me to measure the temperature at that point where the waterblock contacts the center of the CPU.

In order to calculate C/W, I measured the ambient temp at the radiator’s intake fan. C/W is then calculated from the delta between ambient and waterblock CPU temp divided by CPU power in watts. In this case, the test was on an ABIT KT7, Duron 800 @ 1000 MHz, 1.93 volts (53.75 watts). I used a Senfu Radiator modified to take 3/8″ tubing with a Danner 1.5 submersible pump.

I am going to be adding thermocouples to other waterblocks, but right now the MCW462 is the first one so I can’t give you a comparative test at this time. However, keeping the Duron to a relatively cool 7.2 C over ambient is no mean feat; the best air-cooled heatsinks manage to cool to about 15 C over ambient, so the MCW462 cuts this in half.

In sum, Swiftech’s MCW462 breaks some new ground; with over double the size of competing blocks and featuring a “fail safe” mounting system, this waterblock sets new design standards. If you love great design and want top-notch performance, the MCW462 is a superior choice.

Thanks again to Swiftech for allowing us to test this out.