SUMMARY: Another top performer from Swiftech. 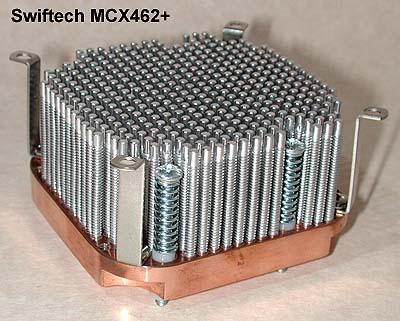 The kind folks at Swiftech were nice enough to send a sample of their latest heatsink, the Swiftech MCX462+. This is an upgraded version with a 0.50″ base compared to the 0.375″ base of the MCX462.

The base is about the best you’ll ever see: 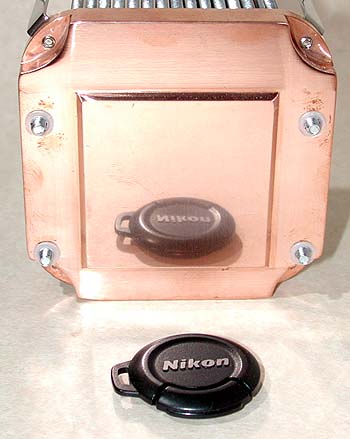 The MCX462+ can mount both a 70 and 80mm fan – included with it are 4 long screws which replace the 80mm fan brackets. In addition, the spring loaded bolts have nylon stop washers on them so that the bolts do not slip when you tip the heatsink. Finally, the standoffs mounted in the motherboard’s socket holes use a bolt with a lock washer, eliminating the need to glue the nylon nuts to the back of the motherboard to keep them from coming off when removing the heatsink.

With these welcome changes, I found the mounting process much easier than before.

In summary, a copper base heatsink with aluminum pins; mounting requires motherboard removal but now with lock washers, mounting and removing the heatsink is easy.

I measured noise using a Radio Shack sound meter placed 8″ from the fan’s intake and recorded noise at a number of rpms – these should not be far off the mark far other 80mm fans at similar rpms. I normalized the readings I found to the manufacturer’s spec for the fan, as shown in the table below.

The MCX462+ was first tested on the CPU Die Simulator which gives results that are unaffected by motherboard influences. I then tested it on a Shuttle AK31, modified to read AMD’s on-die diode, as an example of what users might see on their systems.

Swiftech’s MCX462+ is extremely well made and a top notch performer – how much noise you’re willing to tolerate to extract it is up to each consumer.