An excellent, top performing heatsink for Socket A/370 cooling. — Joe

SUMMARY: An update to the original with greatly improved performance. 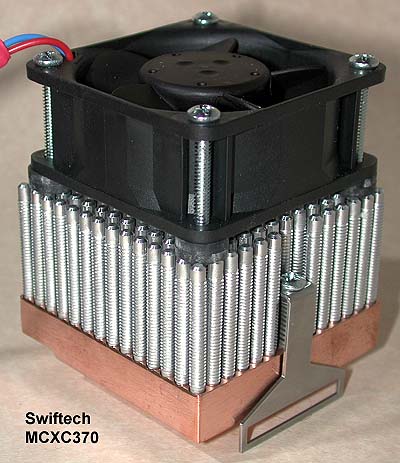 Swiftech was nice enough to send a sample of their latest Socket A/370 heatsink, the MCXC370. The update comprises two elements: The base is now copper and the pins are now of the helicoid design. 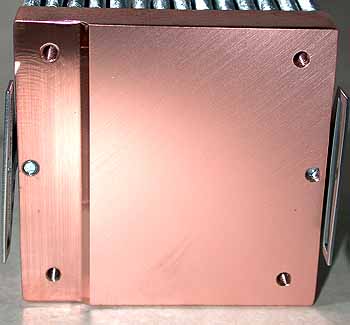 is 1/2″ thick copper. It is finely lapped, smooth and flat – a joy to behold.

The pins are Swiftech’s “helicoid” design – 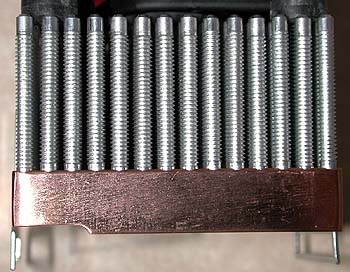 there are 188 pins which, according to Swiftech, is two times the surface area of the smooth pin design.

The fan is the Papst 33 cfm unit – a great compromise to the noisy Delta 38. I measured fan noise at 64 dBA, 8″ from the fan’s intake, with a Radio Shack sound meter. This is only slightly noisier than the YS Tech 26 cfm unit. Part of it is due to the rubber bushings on which it sits.

The clip is truly a joy – it engages all three socket lugs (or two) easily. The screw in the top picture is spring loaded – you back it out, and when the screw head clears the top of the clip, it’s mounted. Simple, fast, very effective – one of the best I have seen.

All in all, a very nice package!

The MCXC370 was tested on three different platforms which use internal die temps; Iwill BD133/PIII, BD133u/Celeron 1.2, and the CPU Die Simulator. The motherboard platforms are not as precise as the CPU Die Simulator as they read in whole numbers and are influenced by secondary heatpaths, while the Die Simulator has none. In addition, it was run an an Iwill KK266+ for a non-die comparison.

The Die Simulator results ranks the MCXC370 second only to its big brother – the MCX462 (HERE). The motherboard tests gives an idea of what users might see on their systems.

Swiftech’s MCXC370 is a quality heatsink with top rate performance and is very easy to install – worth serious consideration.

Thanks again to Swiftech for sending it our way.

Simple PC controlled AC relay, but use with caution – Joe