DIY Waterblock Test: BillA does the Swiftech 462-B

Intent Behind the 462-B Modifications

A bit of background:

Swiftech’s 462-B was the first waterblock I owned and I was impressed from the onset – an extremely well made product. But my investigations early on suggested that its performance could be substantially improved, though in discussions with Gabe Rouchon, I received no support for my suppositions (but this was some 2+ years ago). So I started experimenting (and building a test bench).

It quickly became apparent that the 462-B was an excellent wb to use for testing, and with it I have looked at coolant flow rates, baseplate thickness and materials, nozzle diameter and standoff, bp ‘surface’ treatments and other variables of interest. The 462-B is “The King of Testbed Waterblocks” and, as an ‘obsolete’ product no longer manufactured, can often be purchased cheaply on the used market. (A good buy, but be careful – it will corrode without an inhibitor.)

These are mods that can be done by anyone having only the most basic of tools. Needed will be a small wrench, some silicone sealant, a machinist’s center punch (‘automatic’, or spring loaded), a diamond fingernail file, a hacksaw and rat-tail file, and LOTS of sandpaper of various grits. And copious amounts of patience, lapping the bp will be a test.

The barbed connection mod consists of removing the original 90° push-in elbows, then changing the (more typically used) ¼” NPT male X ½” barb at the inlet only (!), for one of ¼” NPT male X 3/8″ barb. The common brass hardware store variety were used, but all connector inlets and outlets were chamfered. Additionally, where the threaded end of the return connector extends through the aluminum boss of the waterbox, this protrusion was removed. (I used a hand grinder, but a hacksaw and file will work just fine.)

To mod the bp, disassemble the wb and locate the CPU contact area on the inside surface of the bp. Then scribe a 1½ ” diameter circle around the center. Prepare the center punch by filing a pentagonal (not conical) point with an included angle of ~60° (all dimensions nominal, eh?). With the center punch, abuse the surface within the scribed circle by spacing the indentations as closely as possible to one another; the result should be similar to the image below. A high degree of angularity and roughness is the goal. 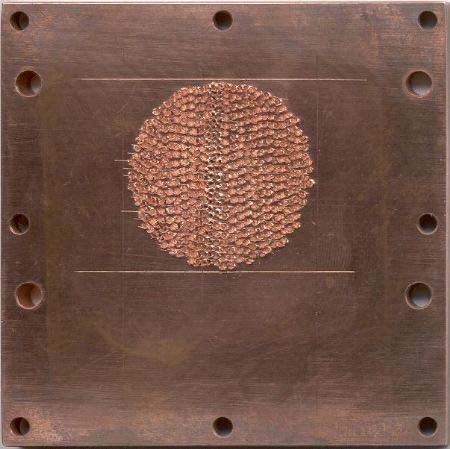 Now all this cold-working of one side of the bp has an unfortunate consequence – the bp will be horribly convex on the CPU contact side. This curvature must now be removed and the surface made flat. That’s what all that sandpaper is for.

A digression on lapping procedures: This will be more completely described, and justified, in a future article on “Flatness and Lapping”. For now accept, if possible, the advice that the best results will be obtained by lapping in one direction ONLY, lifting the piece for the return, and NO rotation. This seems to be the only way to avoid a ‘hump’.
{mospagebreak}

The four tests are shown together, the stock 462-B being flow tested only, then tested with ¼” NPT x ½” barbs with ‘only’ the connector chamfering mods and lapping the bp, (on which more later), then the stippled bp with the same connectors, then the smaller ID inlet connector.

The first graph illustrates the extraordinarily high flow resistance of those chromed push-in 90s, which many users changed out immediately. There is a very slight increase in the head loss due to the stippling, and somewhat more due to the smaller 3/8″ inlet connection. The actual connector IDs are: 0.205″ for the push-in 90s, 0.278″ for the 3/8″ barb, and 0.344″ for the 1/2″ barb.

Looking at the effect of the changes on the wb’s “C/W”, a steady improvement is apparent with each change.

For reference, both bps were lapped using a (now discarded) back and forth motion, with a periodic 90° rotation. Below is the non-stippled bp on an optical flat. That hump is on the edge of the die contact area, not good: 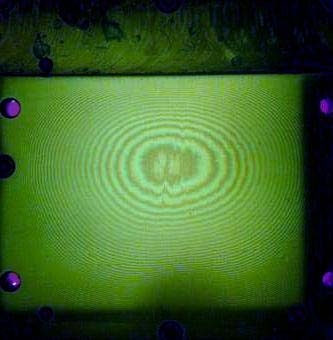 And this is the (oh so extensively lapped) stippled bp: 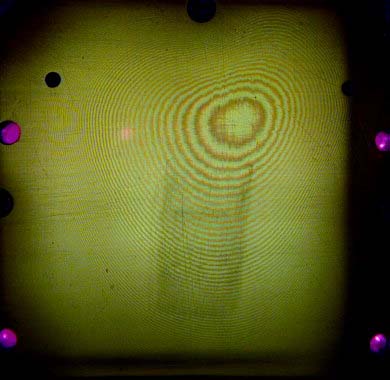 The die contact area can be faintly seen in the lower center. While the flatness of both bps is not what I might prefer, so long as the ‘high point’ is not in, or immediately adjacent to, the die contact area (as it is with the non-stippled bp), the effect is not so very significant. But flatter is always better (denoted by less curvature in the fringes).
{mospagebreak}

With lots of variables examined with respect to the venerable 462-B, what conclusions can be generalized from the data?

Clearly the performance is enhanced by higher flow rates – this is true of any wb. Equally clear is that the original 90° connectors incredibly handicapped the original 462-B’s performance, as it is so dependant on flow.

And also easily understood is that modifying the bp’s interior surface to promote turbulence can yield substantial performance gains, a modification Swiftech took some time to implement.

The effect of using a smaller inlet connector to boost the inlet stream velocity (a nozzle in effect) can be considered in several different ways.

Yes, the effectiveness of the wb was increased, but the cost of so doing is an increased head loss – or load on the pump. Since most WCing systems are limited by the pump’s capacity, with a lower head pump, this change might yield no benefit.

Looking again at the last graph, one can see that on the basis of pressure drop across the wb, there is no significant difference between the 1/2″ and 3/8″ inlets. For the rather sophisticated WCing system designer, the selection of inlet/nozzle diameter does permit the shifting of the operating point on the pump’s P-Q curve. Most users will be better off with the larger 1/2″ barb due to the lower flow resistance.

These tests are an illustrative example of the reason for which the general comparison of wbs is properly made on the basis of thermal resistance (“C/W”) at a specific pressure drop. The pressure drop, expressed as static backpressure, was also the basis for the radiator comparisons made in a past article. In this regard, the fan and the pump are the same; they have only so much pressure that they can create, and their output depends on the resistance they pump against.

Details on the testing of DIY wbs may be found here for those interested in having their wb included.

Today we will be looking at the Hydro Series H80, which is their newest offering that fits in place of a single 120 mm case fan on either the top or the back of the case.