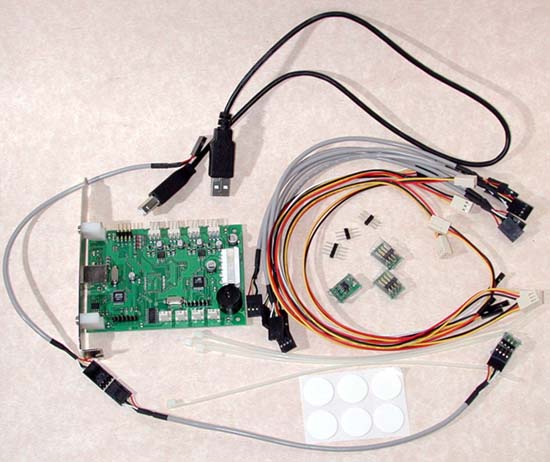 The good guys at mCubed were nice enough to send a sample of their T-Balancer TBAN-SL4 intelligent fan controller. Right off the bat, be assured that this is NOT a simple rheostat fan controller – it’s far more than that (Data Sheet HERE.)

Let me also state up front that for most of us, it will take some playing with to effectively use this product, but the benefits may well be worth the learning curve.

Fan speeds are adjusted using a technique called Pulse Width Modulation (PWM). Instead of regulating voltage, PWM sends 12 volt bursts to the fan at varying intervals – the longer the “off” interval, the slower the fan runs. This allows setting fan speeds to levels that are impossible with voltage regulation.

The T-Balancer uses a USB port to interface with Windows. From the control panel, you can adjust each channel’s operating characteristics, as we’ll show below. I should note that some are using this unit to control lights as well.

For some reason, I could not get the T-Balancer to work with Windows 98, even after using updated software. I can’t say this is typical, as m-Cubed was able to run it on a W98 platform. The tests below were run on XP no problem.

The TBAN-SL4 is the internal version of this product – it fits in a PCI slot but does not plug into it: 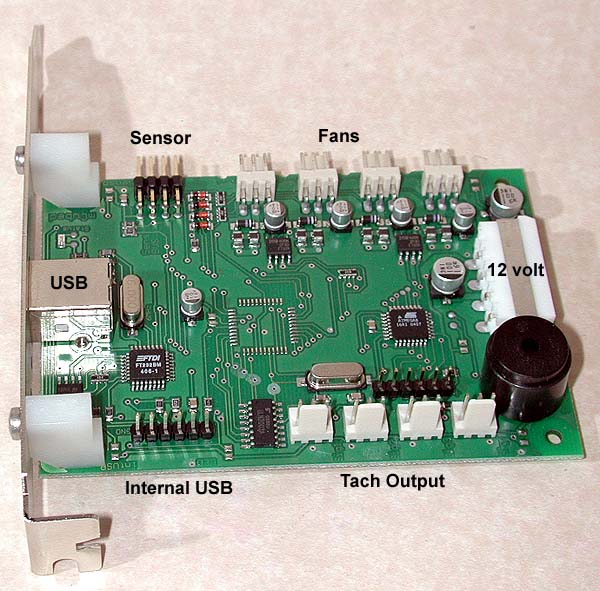 The tach outputs are used so that if the motherboard requires a positive indication that a fan is running, a signal will output to the board. The sensors that ship with the unit are rather large: 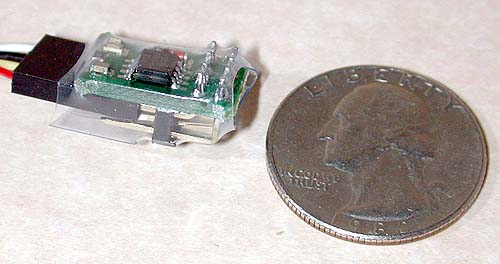 The sensor includes an LED which lights when it’s correctly installed; if it does not light, you must rotate it 180º. There are additional add-ons which allow you to use the thin sensors that can be placed next to the CPU’s core for temp monitoring – these can not. 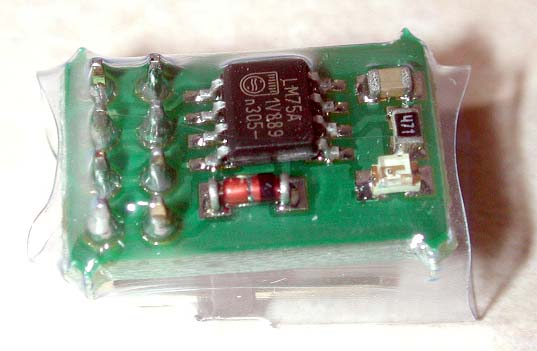 For some reason, Hyper-Snap would not capture the opening screen, so here is a screenshot from their website: 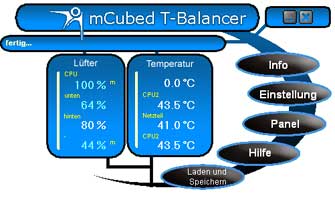 This is the German version. 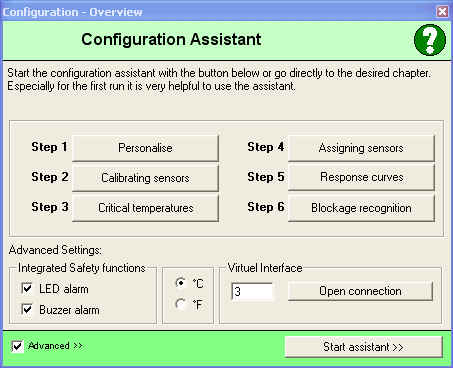 We’ll take the step by step approach. The next screen 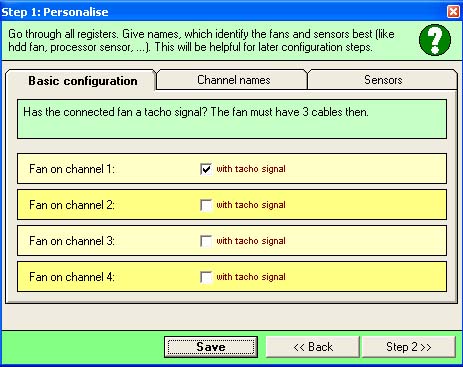 allows you to name the channels etc. The next screen 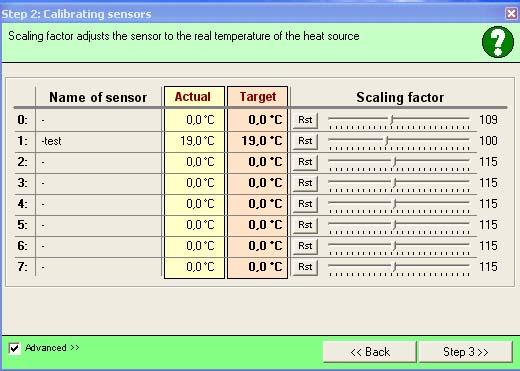 This is OK as far as it goes, but unless what you’re measuring is directly proportional to the source temp, I don’t think what you set up is going to be of much good to accurately control the source’s temp.

Next, you adjust each channel’s temp limits: 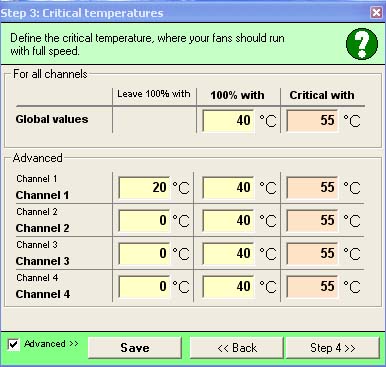 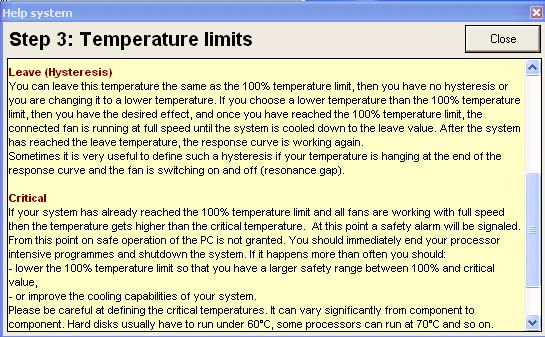 These screens are the same as in the manual.

I must have read this about 10 times before I got it – maybe it’s just me. The rest of the manual is better than this. Next, you assign sensors to fans: 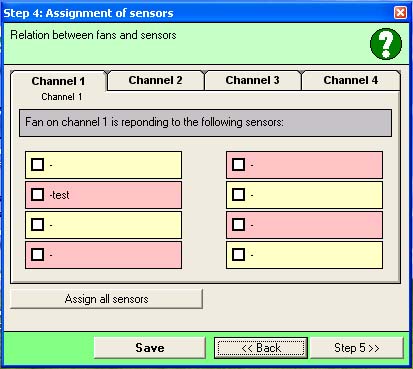 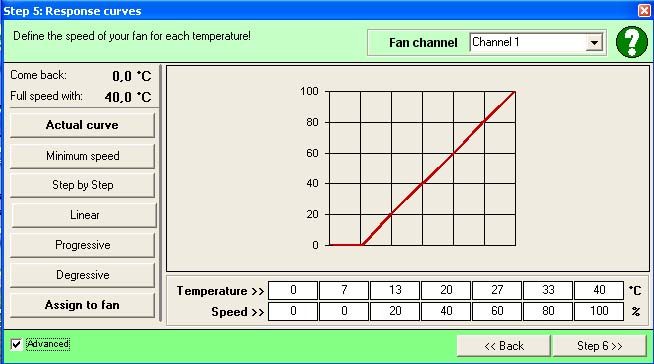 Each channel can follow its own response curve – there are a number of different slopes you can select – this one is the “Progressive”: 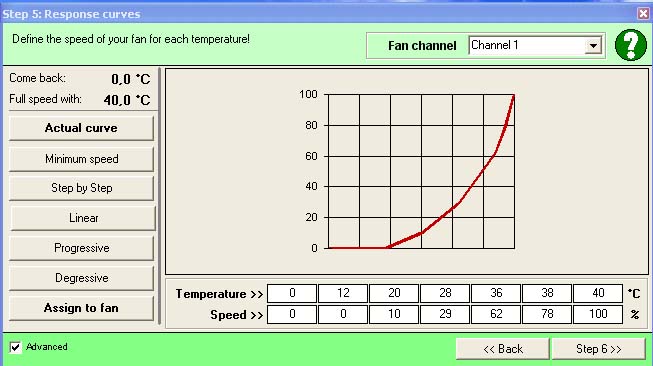 What you can do for each curve is input your own data points and develop a unique curve – I found that you can set temperature points to tenths of a degree: 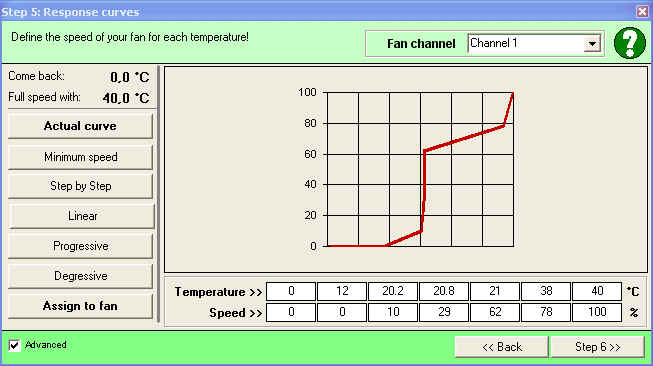 Finally, the last screen checks that each fan is registering properly: 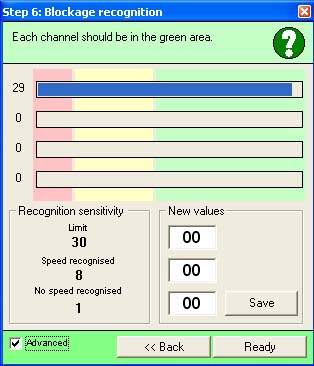 Once set up, you can go back to any screen to adjust settings. When you boot up, the fans will run full speed for a couple of seconds, then settle into its programmed speed.
{mospagebreak}

Frankly, I’m split on this. I looked into this technology a couple of years ago using a controller made by Analog Devices, which does many of the same functions. I’ve also used a fair number of fan control products that perform some of the same functions and I think they all miss the boat on one point – they don’t measure ambient temps.

If the ambient temp varies from 25 to 35ºC and the response curve is fixed, then the temp range will be impacted by a 10ºC variance. Yes, you can manually adjust the response curves to account for this, but I would much prefer a “set and forget” approach.

Next I have a problem with the temp ranges.

A wide temp range for CPU control is useless when you think about it – what good is it to have a 20 or 30ºC temp curve for CPU control? At the upper end, this is about what you’ll get with a stock heatsink. It seems to me the benefit of an intelligent fan controller is to vary temps within a narrow range – let’s say 10ºC – so that at idle, the fan is just ticking over and under sustained stress, it’s running flat out.

The problem is that if you don’t measure ambient temps, then a narrow range is not feasible, as the start point will change. So it’s a bit of a catch-22.

These of course are my biases – the T-Balancer as a product delivers the goods and then some. It’s heads above anything else I’ve seen and if it meets your needs for noise control, give it a serious look.

The T-Balancer is available from 3DCOOL.com.

Why This Is So Hard To Put On A discovery came to light when I was fiddling with a pair of newly acquired Thermaltake Aircoolers. (The famed “Golden Orb,” of course!) The mounting clip is VERY hard to put on,