With the cancelation of Computex 2020 due to Covid-19, some computer vendors have been getting creative with launching new products. Just this last September, Team Group hosted a consecutive three-day online launch event with new products being introduced every day. One of the products released was the Cardea Ceramic C440 Gen4x4 NVMe SSD. This new drive features a unique aerospace-grade ceramic heat dissipater and excellent performance. We’ve obtained a sample of this new drive and plan to give it a thorough test, so follow along as we give you a tour and examine its performance.

With fast NAND memory, DRAM ICs, and a hot-running controller, the Cardea Ceramic C440 would likely run into thermal problems if not for the included heat sink. Artfully composed from aerospace-grade ceramic, the C440 is cool under pressure. There’s no need to worry about drive throttling as the ceramic heat sink keeps the drive temps under control, and adds a little splash of style to your case at the same time.

NAND flash memory has a finite number of read and write operations that can occur before the drive becomes unusable. This finite number is defined as the TBW value and often referred to as the endurance value. Team Group specifics an impressive endurance value, which is among the highest we’ve seen. The 1 TB drive has a TBW value of 1,800 TB, with 3,600 TB for the 2 TB drive.

The T-Force Cardea Ceramic C440 is effectively Team Group’s flagship NVMe drive. It’s for this reason that we are a little surprised to see such a minimalistic package. On the front, we are greeted with the drive itself as seen through a thin plastic casing. On the backside, they’ve given us all the information we need and didn’t overload us with multiple languages.

The packaging is effectively destroyed in the process of opening. Furthermore, be careful when you open it as there’s a sticker on the inside and it’s easy to cut the sticker and ruin it. We appreciate that a simple retail package can reduce the costs marginally, but for the flagship product, we expected more.

Out of the package, the first thing we notice is the blue PCB. This could be considered the reference design for E16 based Gen4 NVMe drives. Other than the blue PCB, the drive is all white with gold lettering. The heat sink is substantial and very heavy. It’s only 1 mm thick, but just holding in hand it’s clear there’s a lot of thermal mass to keep the drive from throttling. 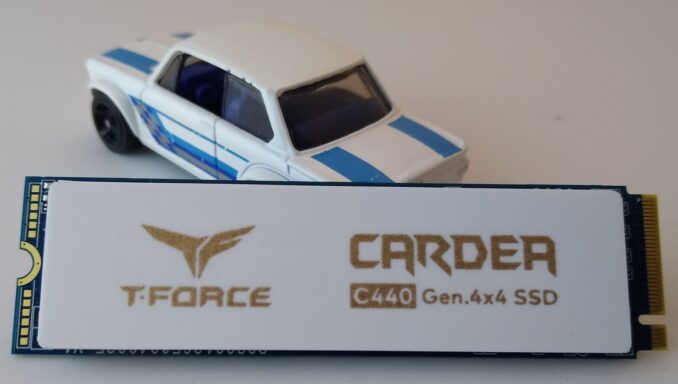 Although it’s apparently very solid, we know ceramic can be incredibly brittle. It’s for this reason that we feel it would risk the integrity of the drive to remove the heat sink, so we’ll just give you an outline of the IC’s. On the top side, there are two NAND memory ICs, one controller, and one DDR4 cache buffer IC. On the backside, there is one DDR4 cache buffer IC, and two NAND memory ICs.

It’s hard to catch in the photos, but the gold lettering is metallic looking and has a spackle effect. The all-white look will certainly be right at home for some specialty white themed builds, but most motherboards tend to be dark black and grey, so the color scheme might not suit everyone’s taste.

Team Group made a big change to their software support for solid-state drives. We’ve seen a basic tool in the past with relatively low usability and functionality. But we are pleased to see they released the SSD S.M.A.R.T. Tool, which is a feature-packed companion tool for participating SSDs.
We like the new tool because it encompasses all of the standard software features we’ve seen in the past, but this one packs in more features such as a speed test. This performance test appears to be powered by Crystal Disk Mark and is quite useful.

We know what some of the performance specs are on paper, but how does it actually perform in real-world tests? To answer that we’re going to put the drive through a gamut of benchmark programs to evaluate the relative performance. In between each major benchmark phase, the drive will be sanitized from the motherboard bios and formatted to NTFS with default settings under Windows 10.

All tests will be performed with the C440 installed in the top M.2 slot to utilize the direct CPU interface. 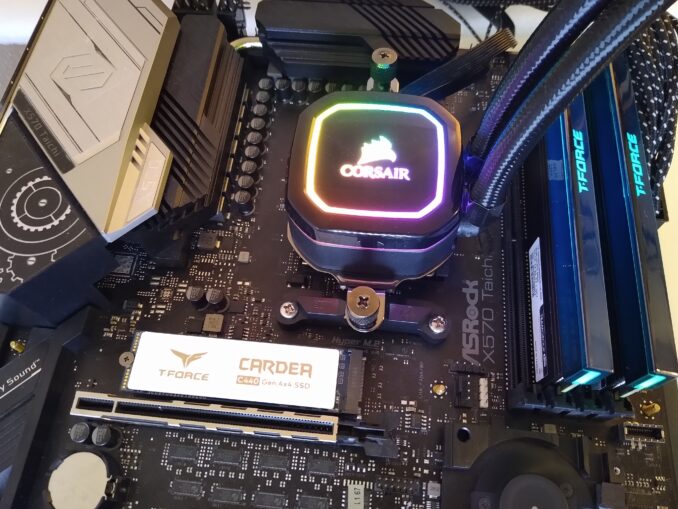 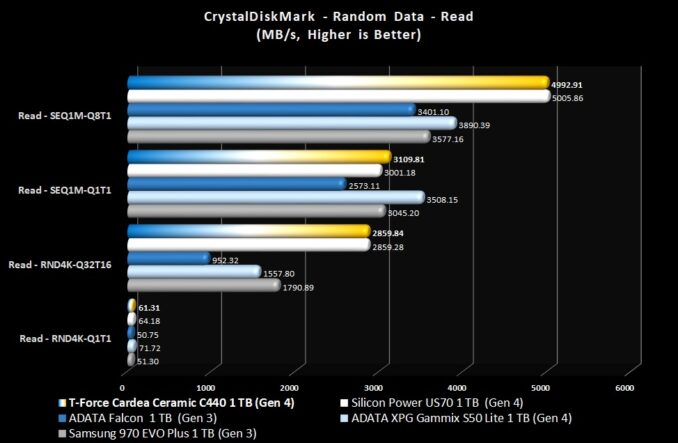 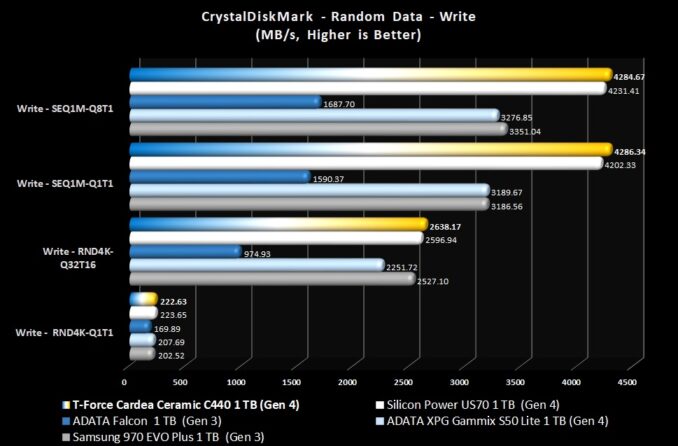 Recalling that the Cardea Ceramic C440 is rated for speeds up to 5000 / 4400 MB/s, we’re a little bit disappointed we did not realize those speeds. The read test results are certainly within benchmark error variance, so the drive gets a pass there. However, for the write performance, we expected 4400 but only realized 4286 MB/s. Running the benchmark more than 10 times we saw a run-to-run variance of about 15 MB/s, so it’s still not enough to reach 4400. 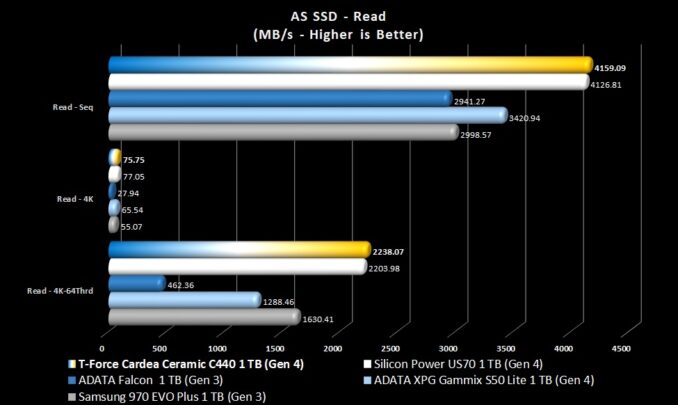 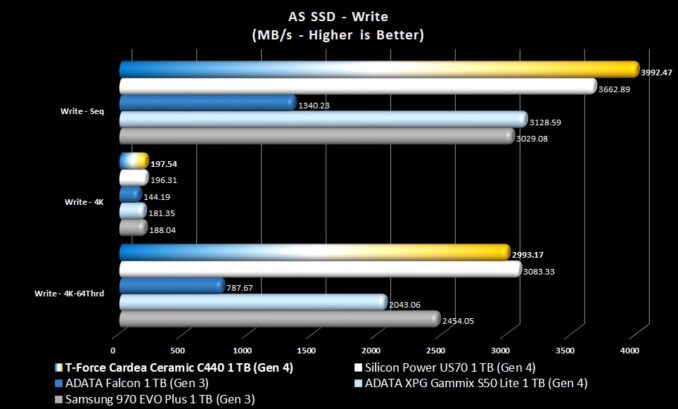 Other than the small issue we had with rated CDM performance, we are very pleased with the overall performance. Looking at the speed in comparison to the US70, which is another Phison E16 based drive, we are happy to see the C440 taking the lead in some tests. 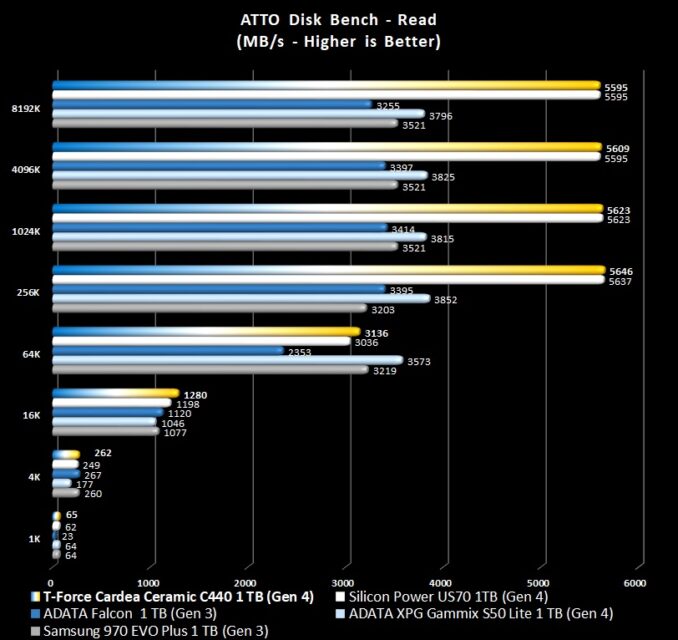 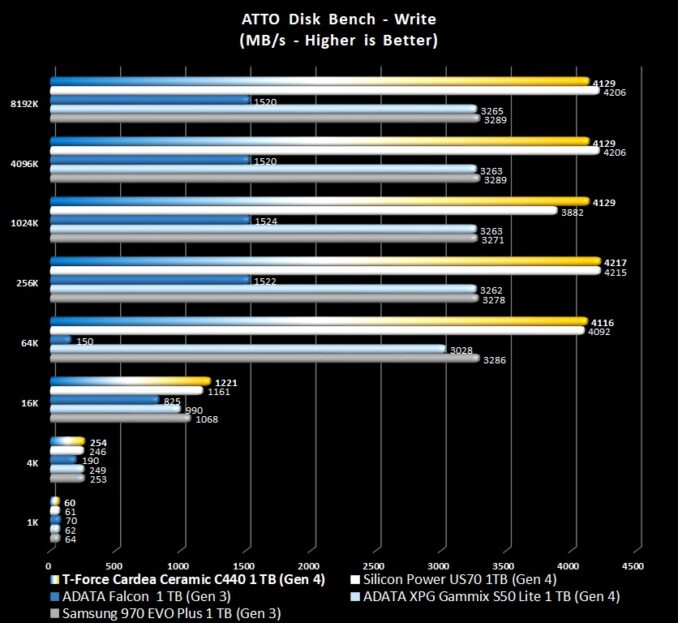 Overall we are very happy with the speed results. Our ATTO test results, in particular the read performance, clearly illustrate the great performance divide between Gen 4 and Gen 3.

In an effort to be as thorough as possible we will use a K-Type thermal probe and a Fluke F51-II digital thermometer for temperature readings. The thermal probe has been taped to the actual drive heat sink with Kapton tape and we tried to center the probe as close to the controller as possible. 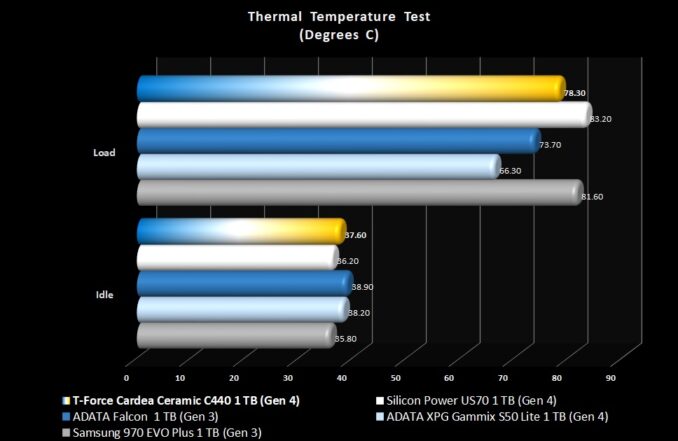 In all of our testing, the drive did not throttle performance because of temperatures or any other reason. The unique ceramic heat sink does a good job of dispersing the heat and lowering the overall drive temperature by a few degrees. While we were not able to remove the C440’s ceramic heat sink and compare the temperature of a naked drive, readers can draw some conclusions by looking at the Silicon Power US70, which is a similar drive and ships without a heat sink. 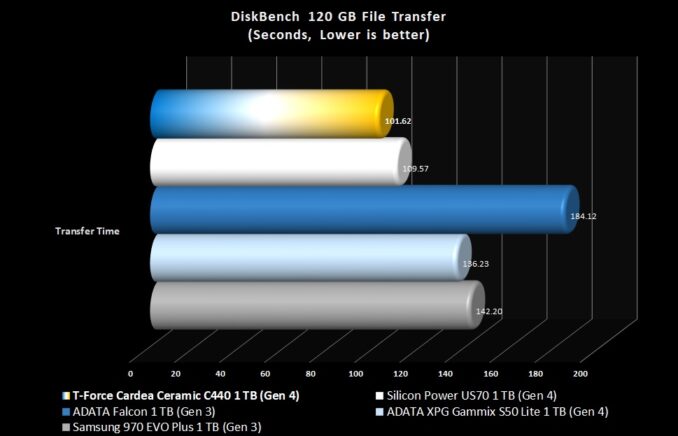 The C440 disk transfer performance is amazing. In this test, it beat the Silicon Power US70 result by nearly 8 seconds. Comparing it to the top Gen 3 drive in our lineup, we see an impressive 41-second improvement in transfer time. 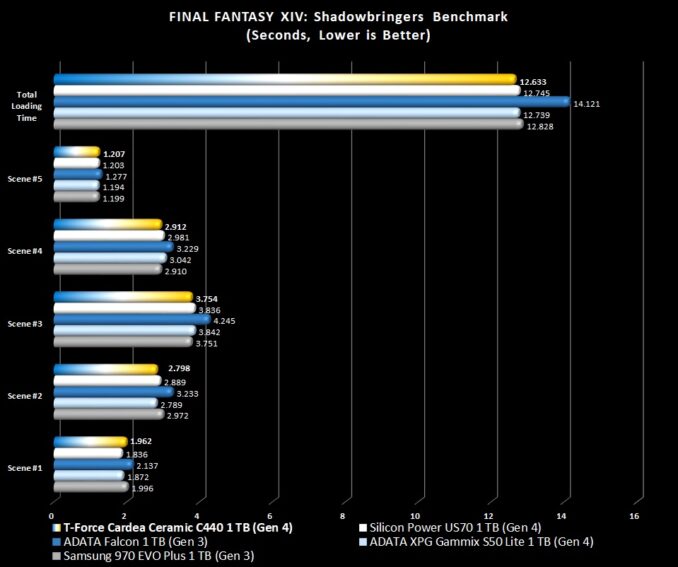 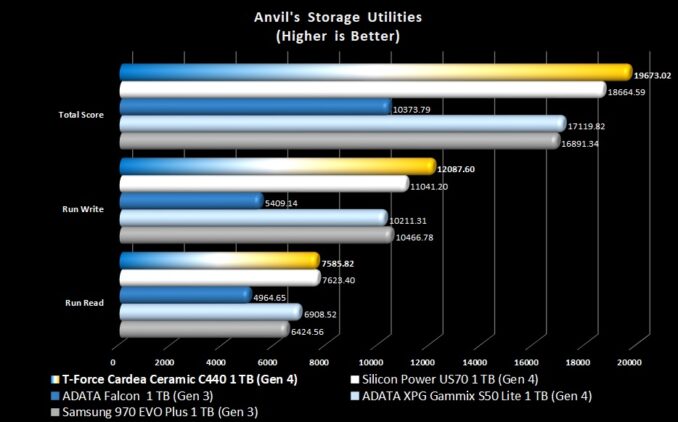 We like to wrap up the testing segment with an Anvil’s Storage Utility test. The total score takes many performance factors into consideration and provides a very reliable gauge of the overall performance. The Cardea Ceramic C440 is the fastest drive in this lineup, and indeed the fasted drive we’ve had the pleasure to test. Looking at the total score, it has a 5% lead on top of the US70, which is an impressive feat considering they are very similar.

Overall we’re pleased with the T-Force Cardea Ceramic C440 drive. From a style perspective it’s basic, but with a white ceramic heat sink. It’s sure to stand out in your build. We were happy to see the heat sink serves a bigger purpose than just style points. In all of our test results, there was no throttling observed. The controller is the primary heat source for an NVMe drive and the ceramic heat sink dispersed the heat well across the entire drive. The big downside we see to this heat sink approach is it cannot be used in conjunction with integrated motherboard heat sinks.

It’s not just about that unique white heat sink, from a performance standpoint the drive is impressive. We do have to dock the drive a few points because we did not achieve the rated speed in Crystal Disk Mark. Other than that one small technicality we saw impressive numbers across the board. Discounting a few outliers, it effectively crushed all the drives in our lineup and boasts an impressive 5% gain in Anvil’s test suite on top of the other 1 TB Gen 4×4 drive in our test group.

You can find the 1 TB version on Newegg for $189.99. With current PCI-Express 4.0 x4 drives ranging from $160 up to $230, this places the Team Group drive about in the middle for 1 TB option. However, some of the drives in that range are running faster NVMe controllers. If we narrow down our search to drives we know contain the Phison E16, then it becomes apparent the Team Group drive is at the top of the price market. Is the unique ceramic heat sink enough to justify its price point for similar-performing drives? That’s a question we will leave you to answer but we are pretty excited about this drive and have no problem giving it our Overclockers approved stamp of approval.

NVMe based M.2 drives have been in the consumer landscape for a couple of years now. Typically these blazing fast mass storage devices come with a much higher price per gigabyte than its 2.5″/7mm SATA based cousins. As time has gone on, more players entered the market and budget oriented NVMe M.2 drives started to appear lowering the price per gigabyte while still being faster than SATA based drives. In this case, Toshiba OCZ has sent us the RC100 480GB M.2 NVMe SSD to review.

Silicon Power has just announced its latest budget-friendly PCIe Gen3 M.2 SSD, the UD80. With sequential read and write speeds of up to 3400 MB/s and 3000 MB/s and capacities ranging from 250 GB up to 2 TB, the UD80 is designed for a variety of gamers. The UD80 also supports NVMe 1.4, low-density parity check, and E2E data protection. Pricing and availability are not available at this time. For more information, check out Silicon Power’s press release below.

Last night, PNY launched the LX2030 and LX3030 series of high endurance M.2 NVMe SSDs geared towards the emerging cryptocurrency CHIA (XCH). Offering a TBW (Terabytes Written) rating of up to 54,000, the LX2030 and LX3030 are ideal for CHIA’s “Proof of Space and Time” plotting method. Both models are currently available on PNY’s website, though prices are not available at this time. Here is PNY’s official press release.

Could you tell how the heat sink is attached to the drive? I ask as if it is glued you can use Goo BeGone; that stuff is really good at breaking down adhesives, even cyanoacrylates (super glue). Not that there appears to be a good reason to remove it outside the possible desire to use a MB's heat sink or other.

The heat sink has been affixed with very strong thermal tape. I am certain I could overcome the adhesive by getting it hot, but I was unsure if the ceramic heat sink would crack or be damaged during the removal. That's an interesting idea about using something like goo gone to soften the tape bond, I like it!!