SUMMARY: Taisol make some very good heatsinks – this is not one of them. 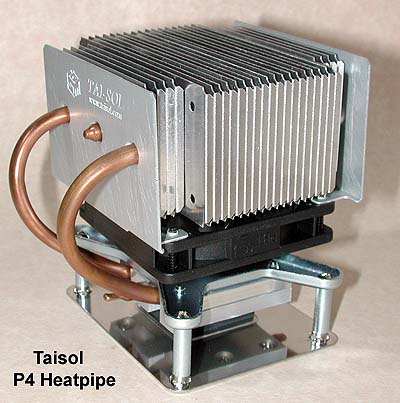 The kind folks at KD Computers were nice enough to send a sample of their latest temperature controlled heatsink, the Taisol P4 Heatpipe (CMP411151). This is certainly an impressive looking unit, with heatpipes arcing into the fins. The heatpipe attaches to the P4 with a backplate: 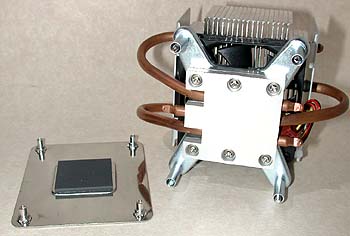 You must remove the standard P4 retention base and replace it with the Taisol backplate – there is a rubber pad which insulates it from the motherboard.

However, the arcing heatpipes may interfere with some components on the motherboard. On the Acorp, one of the capacitors was in direct contact with a heatpipe – a very tight fit. I also noticed that the DIMM slot nearest to the socket resulted in a tight fit – it is conceivable that the heatpipes might preclude using one DIMM slot.

The aluminum base is well finished: 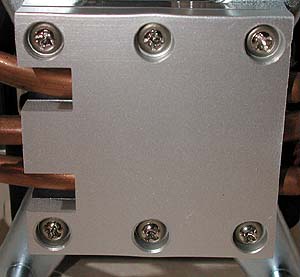 Note that it is two plates bolted together. This is an important point, because the efficiency of the heatpipe depends on the transfer of heat from the baseplate to the heatpipes – more on this later.

I tested the Taisol P4 Heatpipe on an Acorp 4S845A motherboard with a modified P4 1500 to read CPU case temps.

Looking at these results, I decided to test it on the Die Simulator as well:

Results are under whelming, to say the least. Motherboard results place the Taisol P4 Heatpipe in the lowest rank of heatsinks (Heatsink Ranking) tested to date.

Curious as I am, I decided to delve into this further. I unbolted the base to see how Taisol mated the heatpipes to the base – this is what I found: 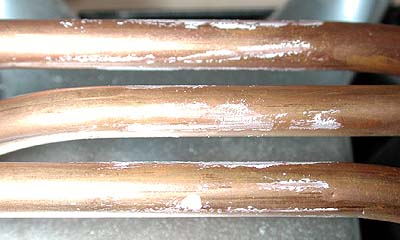 Very little grease on the heatpipes. 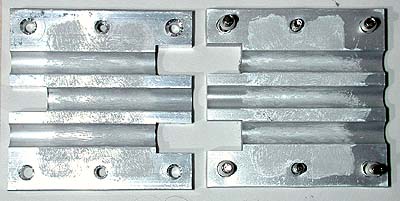 Not a lot of grease on the baseplate.

Now I KNOW that our readers buy and use thermal grease. The OBJECTIVE is to put on enough to ensure good thermal transfer. This is NOT a good example of applying thermal grease; no doubt that performance of this heatsink was NOT helped. I would estimate that, at best, perhaps 20% of the heatpipe’s surface area contacted the baseplate.

OK, so I figure let’s add some grease and see what it can do; I cleaned off the white grease an applied a liberal layer of Cooling Flow thermal grease: 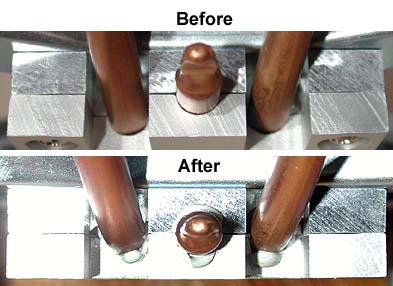 I then retested on the motherboard:

A marked improvement in results – almost 3 C – although it still places in the lower rank of heatsinks. I would think that a copper base might improve results somewhat – I was surprised to see it with one of aluminum.

Thanks again to KD Computers for sending this our way.