Often times we see NVMe drives with impressive read speeds, but they are lacking when it comes to input/output performance and write speeds. Team Group’s Cardera Zero Z340 offering aims to compete with the very best Gen 3 NVMe drives, but with a price tag that resembles a mid-range drive. Did they succeed at creating a top NVMe contender? Follow along as we explore the features, performance, and value of this NVMe based SSD.

To accomplish this feat and deliver top-tier performance, Team Group turned to the Phison PS5012-E12S series controller. A blazing fast controller alone won’t get the job done so they paired 3D TLC NAND flash memory and DRAM cache to round out the hardware selection. In terms of performance, the Z340 boasts sequential read and write times of 3400 / 3000 MB/s, respectively which puts the drive performance in the upper echelon of third-generation NVMe drives. For comparison, the best SATA III drives on the market are still about six times slower. We’ll see later on if they deliver on the claims and how it stacks up against other high-end NVMe drives.

When pushing the limits of NVMe speed, modern drives tend to heat up quite a bit. We’ve seen drives released on the market with all sorts of fantastic coolers to combat the ever-increasing heat concern.  The Cardea Zero Z340 uses a minimalist heat sink of sorts to fight that issue. Coming in at a scant 1/64th of an inch it hardly qualifies as a heatsink by itself. However, composed of graphene, this new heat sink technology might just be enough to combat thermal throttling under extreme workloads.

Some may see the lack of a large heatsink as a potential downside to the drive, however, we see it as a selling point. Disassembling a newly purchased NVMe drive and potentially damaging it, as well as putting the warranty into question, is a bad idea. Team Group’s unique ultra-thin graphene heat sink might be the only OEM NVMe cooler on the market that can fit underneath a motherboard integrated heat sink.

Likely to reduce cost, Team Group has implemented a single-use packaging system. On the front, we are greeted with the drive itself as seen through a thin plastic casing. On the backside, they’ve given us all the information we need and didn’t overload us with multiple languages.

Realistically, we expect this type of packaging to be reserved for the purely budget orientated NVMe offerings. For a drive that aims to compete with the very best Gen 3 drives out there, we had higher hopes for the packaging and unboxing experience, but it is just packaging. Be careful where you cut, as there’s a sticker tucked away inside the package.

Out of the package, we get our first glimpse of the drive. The 1 TB model we are reviewing today has no IC’s on the underside. All of the circuity is located on the top.

The heat sink proposes a difficult conundrum with NVMe drives. On one side of the fence, users would prefer a high-quality heat sink that can adequately cool the drive. However, the other argument is that the drive should not have any heat sink so the motherboard’s integrated armor can be used instead. Team Group tries to bridge the gap and make both camps happy. At just 1/64th of an inch, it’s thin enough to fit underneath integrated motherboard heat sinks. As the heat sink touches the entire topside of the drive, it disperses the intense heat focused at the controller and thus helps cooling if used with no other heat sink.

With the heat sink removed, we can get a good look at the actual hardware.

Team Group offers a nice piece of free software that applies to the Cardea series of SSDs. To measure drive temps and overall health, Team Group has a nice utility, the SSD Toolbox. This aptly named application includes all the built-in features needed to check the status of the drive. We tested Version 5.13 with Windows 10.

The software is simplistic but does provide enough useful information to be useful.

We know what some of the performance specs are on paper, but how does it actually perform in real-world tests? To answer that we’re going to put both drives through the gamut of benchmark programs to evaluate the relative performance. In between each major benchmark phase, the drive will be sanitized from the motherboard bios and formatted to NTFS with default settings under Windows 10.

With a naked drive and no cooling at all, there was no thermal throttling observed, even running the benchmarks back-to-back to simulate a worst-case scenario. All benchmark results and stress testing with done in an open-air test bench with no fans or direct airflow.

All tests will be performed with the Z340 installed in the top M.2 slot to utilize the direct CPU interface. 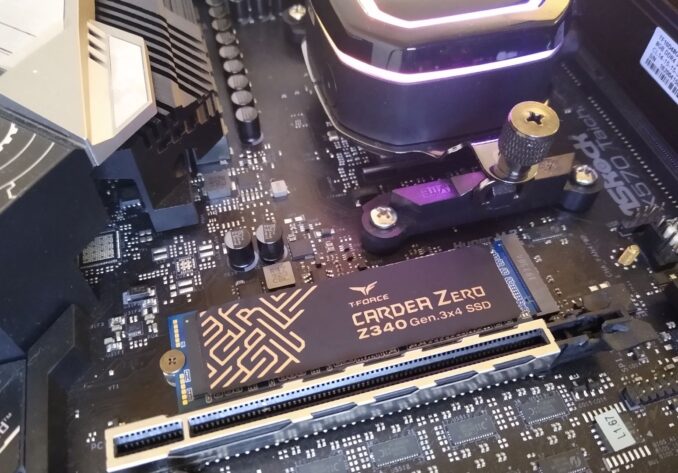 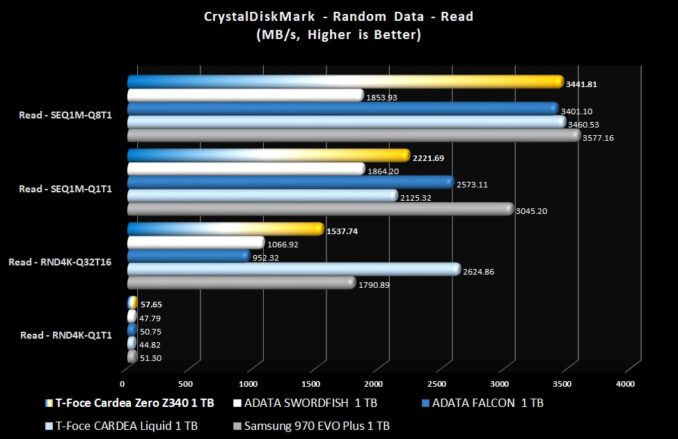 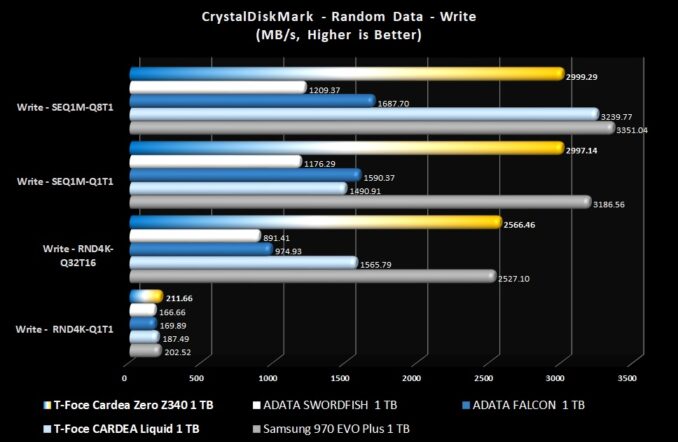 The Z340 has a rated speed of 3400/3000 MB/s for sequential read/write speed in Crystal Disk Mark. As we see here, our drive realized the rated speed. The Samsung 970 EVO Plus is known to be one of the fastest performing third generation drives on the market. In almost every test case we can see the Z340 performed admirably and very comparable to the 970 EVO Plus.

We were particularly excited to see that the Z340 came out on top for both of the random write tests. The multi-thread random write test clearly illustrates the difference between budget drives and top-tier ones. 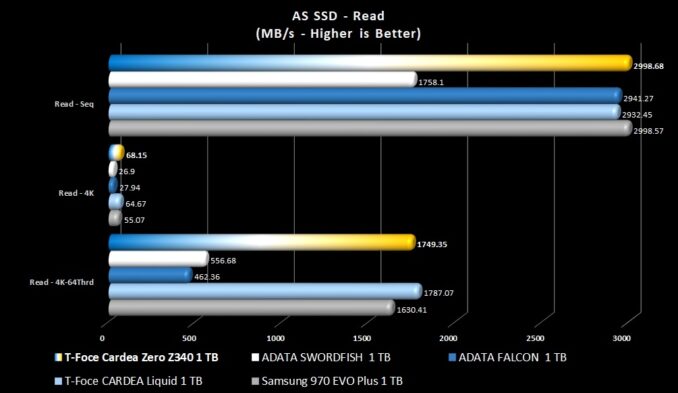 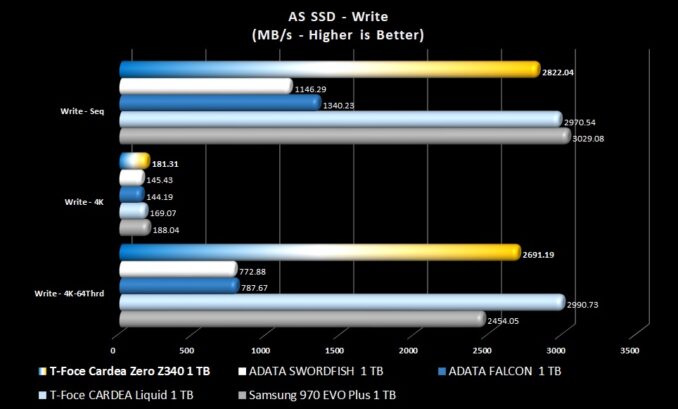 At this point, we know that the drive is blazing fast and a top competitor compared to the others we tested. As we mentioned in the intro, many budget drives boast high sequential read numbers, but they fall short in the write tests. The Z340 performs just as well in the write tests as it does in the read tests. 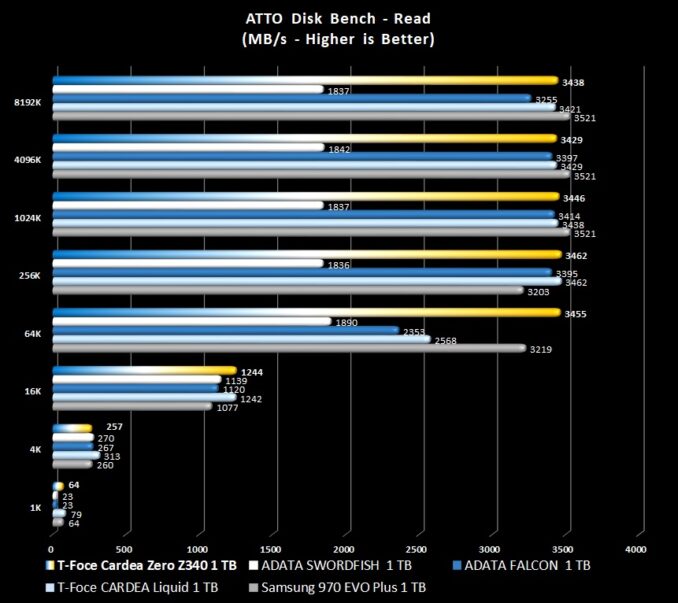 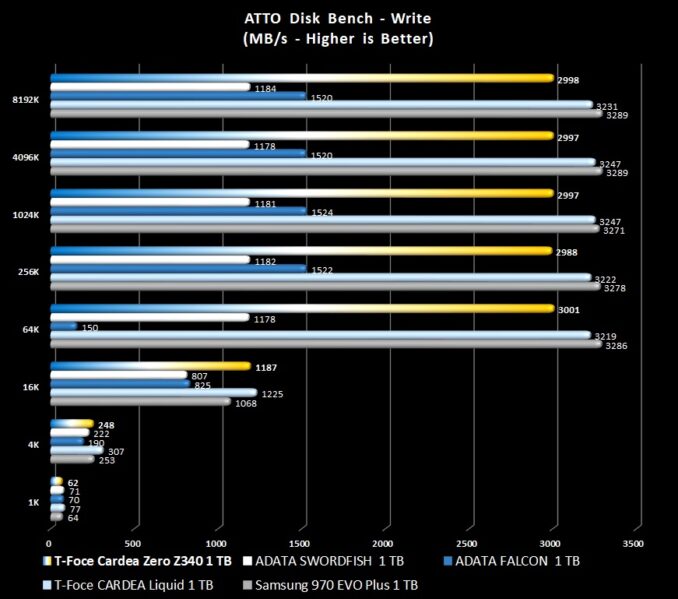 There were no big surprises here.  Like the Crystal Disk Mark benchmark tests, this drive is quite fast and easily scores over 3400 MB/s in the read performance. It’s rated for 3000 MB/s write performance but it doesn’t quite make it there in ATTO.

In an effort to be as thorough as possible we will use a K-Type thermal probe and a Fluke F51-II digital thermometer for temperature readings. The thermal probe has been taped to the actual drive with Kapton tape and we tried to center the probe as close to the controller as possible. 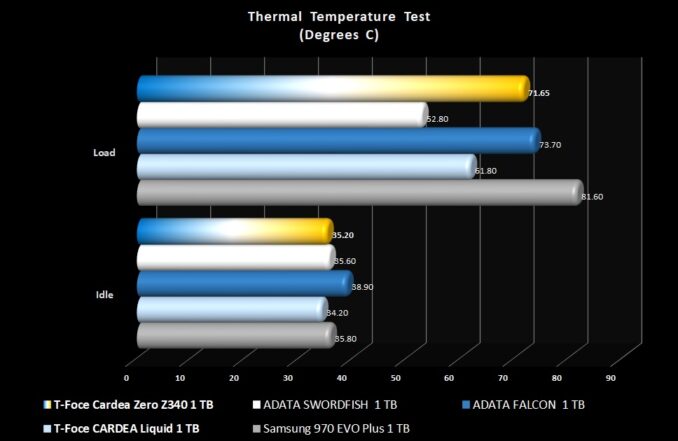 While it wasn’t as hot as the Samsung drive, it was still quite hot during our thermal torture test. The ultra-thin heat sink didn’t offer much in terms of cooling, however, it did not throttle in our tests.

One of the big selling points is that this drive has a heat sink and is natively compatible with the motherboard heat sink armor. We wanted to see how the drive performed with the ASRock X570 Taichi M.2 integrated heat sink attached. In that test, we observed a maximum drive temperature of 53 °C which is significantly lower. 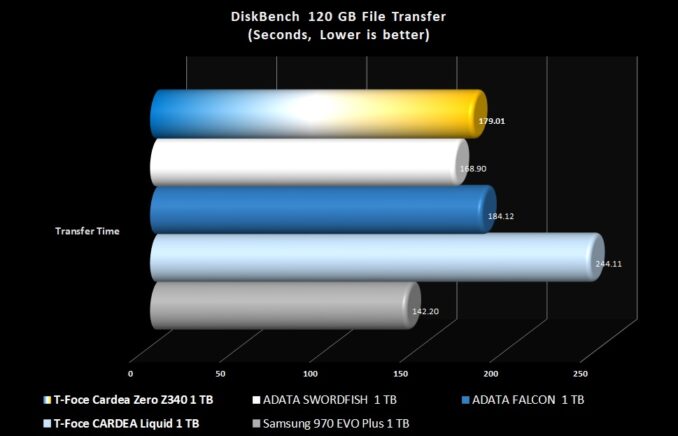 When it came down to real-world tests, the Cardea Zero Z340 didn’t perform as well as we had expected. In synthetic benchmarks, it was highly competitive with the Samsung 970 EVO Plus, but the file transfer test showed a pretty big difference in speed. 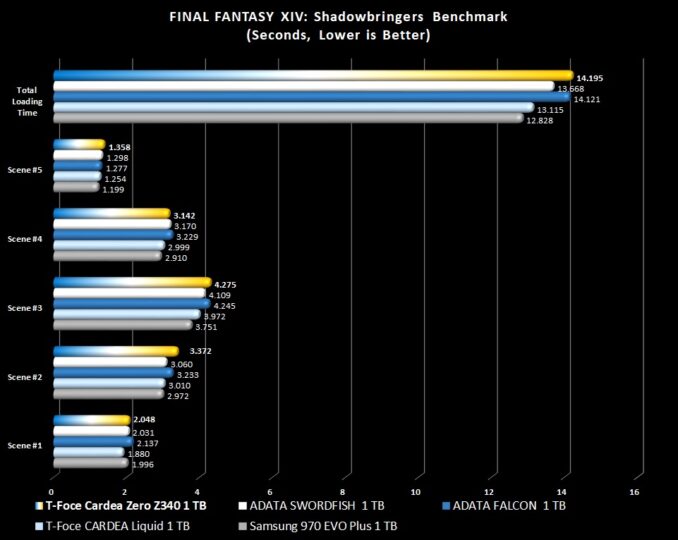 Similar to the file transfer result, our test drive didn’t perform as well as we had expected based on the synthetic benchmarks. 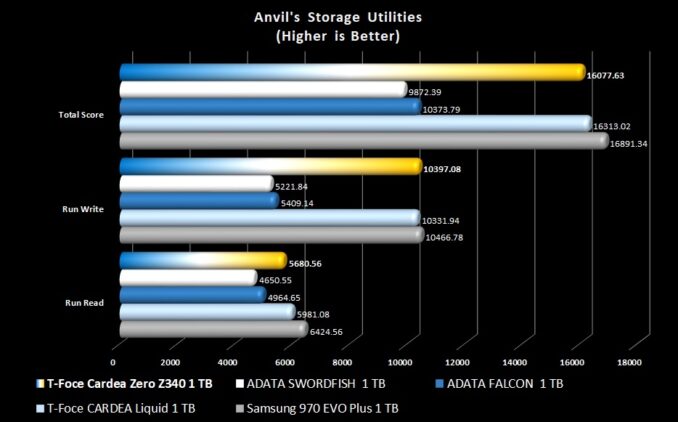 Overall we are very happy with the Team Group Cardea Zero Z340 SSD. They’ve packed the drive with the high-tier Phison PS5012-E12S controller, 3D TLC NAND flash memory, and DRAM cache IC for superb speeds. To keep it running cool they implemented an ultra-thin graphene heat sink. While it’s obviously not a powerhouse cooler, it does a very good job of dispersing the heat and stopping the drive from throttling. Most of the heat is concentrated at the controller IC, and the heat sink spreads out that heat effectively to reduce the hot spots. It’s a very unique cooling solution that allows you to use as-is or with an integrated motherboard heat sink.

When it came down to performance we were quite impressed. Our drive scored an excellent 3441/2999 MB/s sequential read/write performance in Crystal Disk Mark. The drive is undoubtedly fast, but we observed the random write speeds were exceptionally fast across the various benchmark programs. In particular, the Z340 beat Samsung’s infamous 970 EVO Plus in the Crystal Disk Mark RNDS4K-Q1T1 test. In the AS SSD read test, the Z340 outpaced all drives we compared and even came out ahead in 4K-64THRD write as well.

Priced at $139.99 for the 1 TB option, it’s certainly not the cheapest 1 TB storage solution on the market. However, when we look at performance relative to price point, then the drive really stands out from the crowd. We saw that in just about every test case, the Z340 was a serious contender for the Samsung 970 EVO Plus. Considering that the Samsung drive is $189.99, it becomes clear that the Team Group has a much stronger price/performance ratio. We highly recommend this drive to anyone who wants the best that Gen 3 NVMe has to offer.

In recent years, ADATA has gained recognition as one of the global leaders of DRAM memory and Flash application products. They recently launched two new fast PCI-Express x4 3.0 NVMe 1.3 drives, which push the performance per price boundary. The FALCON and SWORDFISH come in at just 13 and 12 cents per gigabyte respectively. Despite the remarkably low price, performance is still quite good. They even managed to include a stylish heatsink to help with thermal throttling and add a little bling to your build.

ADATA launched the XPG SX8200 in late March this year. It’s built around their second generation 64 layer 3D NAND Flash and it’s their fastest consumer SSD to date. I just happen to have one of these drives here today and we’ll see just how fast it is using our usual array of testing.

Often times we see NVMe drives with impressive read speeds, but they are lacking when it comes to input/output performance and write speeds. Team Group's Cardera Zero Z340 offering aims to compete with the very best Gen 3 NVMe drives, but with a price tag that resembles a mid-range drive. Did they succeed at creating a top NVMe contender? Follow along as we explore the features, performance, and value of this NVMe based SSD.