SUMMARY: A good aftermarket chip cooler that runs inherently cooler than some other designs.

Crazy PC sent me a Thermaltake Chipset Cooler to test out; I have seen these around and wanted to see how they performed. 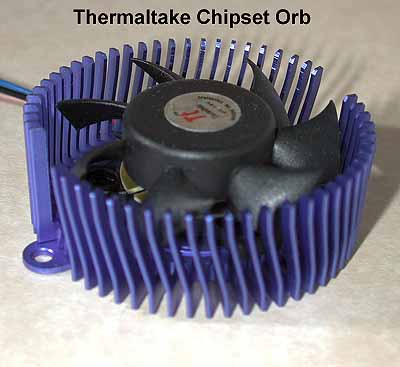 The Blorb comes with mounting pins; I used small bolts instead for max mounting pressure. NOTE that the ORB will cost you a PCI slot as a GPU cooler.

When I looked at the back, the first thing that struck me was that, for some chipsets, the ORB will not cover the chip. I lined it up on the Leadtek GeForce GTS2 and the edges of the chip are exposed. I thought this impact performance but it did not, which surprised me. 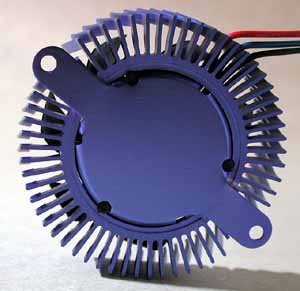 What happens is that the ORB’s airflow is directed down towards the chip and away from it; this pattern results in cooling the edges of the chip through airflow. If you compare this to the Leadtek Stock Heatsink below, 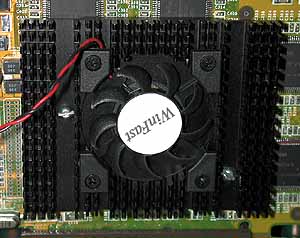 you can see that the Leadtek heatsink is much larger and covers the GPU and a lot of other territory. As you will see from the test, this has an interesting side effect on performance.

To test the Blorb, I tested it against the stock LeadTek. For this test, I milled a small groove in the base of each heatsink and placed a thermocouple in the groove. I used watercooling for the CPU so there was no air blowing on the back of the card. I found that running 3DMark’s high detail helicopter benchmark gives me the highest GPU temps, so I looped it to stress the GPU for about 30 minutes before taking temps. I measured ambient air at one inch from the fan’s intake to get a delta.

As you look at these results, from the Deltas you would think there’s not much of a difference. However, from the GPU temps, it looks like there’s a more of a difference in favor of the Orb. There’s a bit of a puzzle: How come the ambient temp for the Leadtek is higher than the ORB? Did I test on two different days?

What happens is the the airflow of the Leadtek heatsink pushes air up towards the fan’s intake in a recirculating pattern – that’s why the ambient air going INTO the fan is a higher temp than the ORB’s. So even though the DELTA shows about a one degree difference, the ORB’s GPU temp is lower. The ORB’s airflow, which is directed AWAY from the GPU, accounts for the difference.

Good cooling results make this a fine addition to the cooling kit. However, realize that you will lose one PCI slot if you use this as a GPU cooler, and it may not fit on some motherboards as a Northbridge heatsink, depending on how close other components are to the chip. The round design does take up more territory than a square one.

Thanks again to Crazy PC for sending the ORB to test out. Crazy PC is one of our advertisers – they are a “Mom and Pop” shop with an outstanding 7.0 out of 7.0 on Reseller Ratings!

EVGA 8800GTX – A Gaming Analysis on FEAR and CPU Scaling

Follow-up to see if there is a CPU bottleneck on the 8800 GPU’s – Dominick V. Strippoli


Video Cooling on the Cheap


Installing a DangerDen NV-78 Waterblock on an EVGA 7800GT