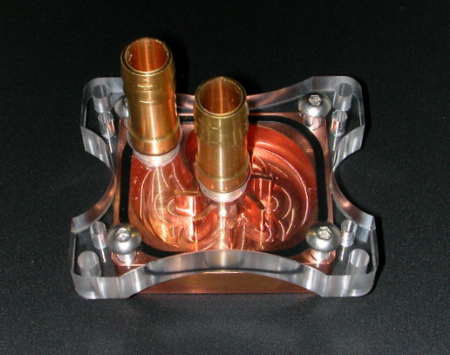 OCPC Describes Their Design Goals for the Atlantis:

The main priorities in designing the Atlantis were to provide the best combination of high cooling performance, best appearance, and low waterblock weight possible at a reasonable cost.

A waterblock first has to fulfill its main purpose: keeping processors cool.

To do that, we wanted to keep as much surface area close to the critical die area (highest loading) as possible to maximize the transfer of energy into the water. We did not want to create a waterblock that was too restrictive, required a large pressure pump or would not match the rest of our range of products.

Special machining techniques were chosen that help to create turbulence and improve surface area. To do that, we made the base cut as flat as possible base with as many small ridges as possible.

We put performance ahead of polishing. Highly polished surfaces are nice, but if they are not flat, you get poor contact with the CPU die and performance loss. So we put flatness above beauty in the overall base finish.

This doesn’t mean we ignore looks. A block design has to work well, but as more people switch over to water-cooling, it’s not just about performance any more. Many people use water-cooling for other reasons, like quietness and even looks.

We use acrylic because people like how it looks (though we also supply the unit with an anodized aluminum cap for those still unsure about using it).

Our testing has shown that weight is indeed an important issue. A vertically mounted motherboard combined with a heavy waterblock hurts performance. A lot of weight hanging from the motherboard makes it difficult for clamping mechanisms to provide equal pressure to all areas covered by the waterblock.

We aimed to reduce waterblock weight to a minimum. This lets the four mounting springs provide as even a clamping effect as possible. Our testing showed that this was very important for overall performance, since poor, uneven clamping pressure causes poor performance of the thermal interface due to unequal contact or thermal compound distribution.

All designs must also consider future trends in terms of die size and heat generation. For this reason, we provide an adaptor bracket for PIV and future CPU mounting.

This waterblock is a looker. Without question, it is the most ‘eye catching’ waterblock I have ever seen, and that’s even before adding any LEDs, which can be easily mounted in the thick acrylic top cover plate.

The aluminum P4 adaptor ring (not shown) complements the waterblock’s styling. The brass barbed connectors and intricately machined internal curved fins and even adds to the unit’s attractiveness.

For the fellows with windows in their cases, this wb looks slick.

The copper wb itself is 60 mm long by 50 mm wide (the baseplate thickness over the die was not specified). The barbs are threaded into the acrylic cover and sealed with o-rings (more on this later), and the cover is retained with 4 ss cap screws compressing an o-ring in a groove.

Crucial to the performance of any wb is the flatness and finish of the bp. On the Atlantis’ bp there were faint machining (fly cutting ?) marks, but there were none visible however in the CPU contact area. Overall, the bp had a slightly matte surface.

The Atlantis was flow tested:

You can see that its flow resistance is quite low.

The Atlantis was then mounted under carefully controlled conditions 10 times and its “C/W” determined under ‘standard conditions.’

We got the following results: